@Meanlucario
Because Blizzard recently pissed off everyone by screwing with the game making it worse and people unsubscribing, so…

“Hey! Look at this character we tokenized all of a sudden!”

I’m pretty sure there’s a potion or what-not that’ll just allow someone to transmutate into whatever they want, so this is about as stunning as any other character; “Yeah, so? I was a female night elf with huge tits last week. Next paycheck, I’m thinking of being a Worgan.”

They did this before when they got into hot water and then all of a sudden they have a book detailing Soldier 76 and his “romance”. It’s a PR stunt and anyone celebrating it has no say in the shitty practices Blizzard or activision does because they cheer for the obvious easy distraction stunt for articles about how “Stunning and brave” they are.

Besides, the only other realm that would care is the fan-porn market, and such details have hardly stopped them in the past.

@WyrmSpawN
Sounds like D&D dragons to me, complete with being color coded for the player’s convenience.

@Meanlucario
Well those realms intersect all the time.

@Cyborg_pony
Yeah, that does sound like something they have been doing.

@Meanlucario
Reminds me of when RIOT was getting in trouble after then hired a certain piece of wood.

It’s obvious what they’re doing, and like clock-work. The sheep buy it. or in most cases, just pirate it, print out the one page, hang it to their wall and stare at it lustfully as they log onto Fanfic net.

@WyrmSpawN
And they wonder why they had to remake Diablo 2, which they’re screwing up and making it not worth the price since they can’t help but fix “Problematic elements” while claiming to be faithful to the source.

Jeez, at this point, just hire Jack Thompson. You’re giving him and all those that attacked you in the 90’s what they want anyways…

There’s this guy who beat all 5 Soulsborne games, back to back, without taking a single hit.

@Background Pony #EEEC
They’ve been out long enough for someone to get the patterns down.

Is Elden Ring ever coming out?

Will Elden Ring be a spiritual successor to Dark Souls like Bloodborne, or will it be its own thing?

The King in Crimson

I don’t know if it’s just me, but the player characters of the DS Castlevania games feel incredibly weak in comparison to the characters in the games before them. Bosses, and even regular enemies can and will shred you in seconds if you’re careless, or just unlucky. But I cannot deny that of the bunch, Shanoa is the worst.

Tinker’s Construct is a weird mod, but so gratifying when you get it to work.

Beat ffx! Finish the final boss with a blitz ace!

@Silent_Witness
I remember reading that many consider Order to be the hardest of the newer games, and I think you’re figuring out why.

Do you have the companion mods for it or just Tinkers? There are a bunch of side mods that add stuff to it.

@Zincy
Haven’t checked them out, but i am intrigued.

I forget how many there are, I’ve gotten to used to mod packs prebuilds that I’ve not properly assembled my own in years.

Every side-quest and task in PoE has been completed. All that’s left is the final main quest.

Advent of Ascension is the ugliest mod I’ve seen yet, but more than makes up for it with size, scope and depth.

Bloodborne really did a number on me when it comes to horror. Prior to it I was full “fuck this runrunrunrunrun” 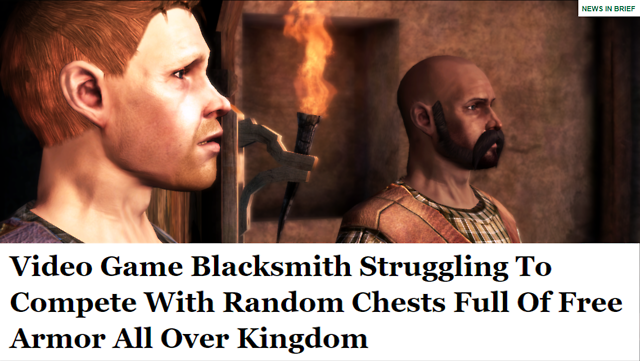 That’s not even the strangest thing about blacksmiths in games.

How does Bob the smithy down in some podunk shit town have the skills needed to repair an ancient magical super sword forged by the gods in the heart of a dying star or the cursed blade of darkness made of living shadows that feeds off the souls of the damned for example? What incredible smithing college do all these guys go to?