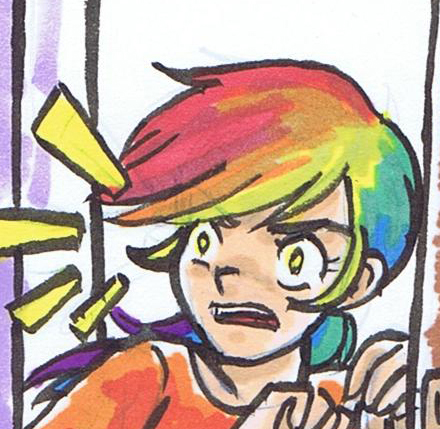 She does look different in her hair color and such, but that she's not obviously pony is part of the point. She even meets Dash the first time without either of them realizing it

Spinister
@RainbowFeather
That specific wording sounds like a story more effective with a more traditional or at least more obvious in their pony heritage style griffon to me.

It's probably just the way you worded it though.

Sounds like it might be more effective with a character who "looks different" from their peers. (That doesn't prevent them from not knowing their specific parentage.)

Though from what I can infer, it seems you're going for a "secret heritage" type story instead.

& I can't think of a good ship for a hippogriff 'cause I'd prefer to make their birth's background "mechanically traditional" & I'm not sure if I'd want to use OC parents for that kind of thing. 'Cause it'd be for funzies only.

Nothing to stop you from making one Actually I have some thoughts in that direction, but this one is Rainbow Feather, who grew up with Gilda-as-a-single-mom in a griffon town, not knowing Dash is her other parent, and slowly coming to terms with being part pony.

Spinister
@RainbowFeather
Mostly I'm just disappointed 'cause I'm a fan of the "griffon with horse rear legs configuration" of hippogriffs & I don't get to see MLP versions of it that much.
Posted 6 years ago Report
Link Quote Reply

The griffon-with-cutie-mark configuration is due to some specific potions meant to allow safe birth for combinations even more unusual than griffon and pony (short version, kid always looks physically like the birth mom).

If Rainbow Feather had been an overt hippogriff, even young Feather would've been able to figure out her parentage much sooner

She's disappointed you're not one!

Spinister
I'm disappointed that you're not a traditional Hippogriff.
Don't even have any actual horse parts.
Posted 6 years ago Report
Link Quote Reply