@Background Pony #39D6
Contrary to popular belief this isn’t actually a shot a Discord, as much as it sounds like it, given it’s past Discord. It’s something in his past that’s come back to bite him in the ass. It’s just really lame and the pure laziness in regards to the story telling. It’s like how the Spiderman villains in the MCU needed to tie to Tony Stark, and unlike those movies which still made them great villains regardless, I’m not expecting anything of merit out of the Knights of Harmony
Posted 21 days ago Report
Link Quote Reply

Background Pony #39D6
Also, not surprising that there’s gonna be more hate on discord for this.
Posted 21 days ago Report
Link Quote Reply 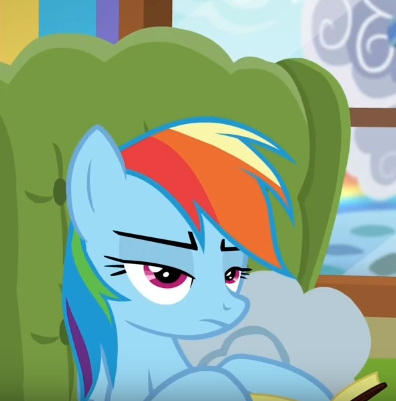 Hitch the 8itch
@Background Pony #39D6
By extension, if Transformers can have two bots from Prime and G1 coincidentally named Breakdown, I don’t see why we can’t have 3 Rarities, 2 Gusties and 4 Applejacks. Although Applejack hadn’t changed much in recent years to be fair. It could work, I know it can.
Posted about a month ago Report
Link Quote Reply

Hitch the 8itch
@Background Pony #114F
For me, if they’re going the ‘generations’ route, they could introduce the missing g1 characters or at least characters whose name haven’t been used in g4 into g4. Heck, they could even put in the g5 characters like with Cyclonus and Galvatron who were supposed to be future reincarnated characters. That’s my best I could think of. Either way, they’re one universe now.
Posted about a month ago Report
Link Quote Reply

Background Pony #114F
@Phoenixflambe
Ahh.
Also, assuming that G4 will continue in some form, it could (and would) be interesting in how Hasbro could treat it, considering the fact that it’s become MLP’s answer to Transformers G1.

Hitch the 8itch
@Background Pony #114F
That or the subsequent ones are delayed. Darn cause I wanna see the granddaughters of Hydia.
Posted about a month ago Report
Link Quote Reply

Hitch the 8itch
OK so I checked their website, it’s been pushed to October AND apparently, it’s gonna be an “oversized adventure”. Of 32 pages. The standard.
Posted about a month ago Report
Link Quote Reply

Hitch the 8itch
Soooo….. Is the date delayed or there’ll be instant release on date?
Posted about a month ago Report
Link Quote Reply

I’m sure a kidnapping and a pair of love potions isn’t beyond them.

Background Pony #03C9
@Phoenixflambe
Who says they had to marry some guy? They could’ve borrowed a page from the fanon version of Chrysalis and put the whammy on some stallion long enough to do the deed.
Posted 2 months ago Report
Link Quote Reply

@Former Trini-Mite
@Former Trini-Mite
I mean, if they’re introducing more antagonists to “justify” the Knights being villains, it’ll make what was likely already gonna be lackluster as a finale even worse, considering how little character they have in their own right, and that’s before you consider how blank the other sets of Elements are.

Also, remember how the comics’ synopsis called Twilight a “Queen,” and then she was referred to as a “Princess?” (speaking of, why was Twilight suddenly referred to as a “Queen” in 101?) It also wouldn’t be out of place for the comics to (falsely) see “Harmony” as synonymous with “Order,” considering just how the Accord arc went down, and how Accord nonsensically hijacked the Elements, aside from the aforementioned possibility of the synopsis getting it wrong.

And why do you ask?

Hitch the 8itch
Someone brought it up from Equestria Daily but who on earth is brave enough to marry Reeka and Draggle?
Posted 2 months ago Report
Link Quote Reply

Very interesting that the ban on humans that was introduced by Faust during the preparation of G4 and then became permanent throughout MLP with the exception of EQG, will possibly be allowed in the new series on G1 crossover with G4, although it is still too early.

Where did it say humans were banned?
Posted 2 months ago Report
Link Quote Reply

From a larger perspective, it is clear that the G4 / G5 accommodated an enormous amount of future stories for the fans and future fans indefinitely, perhaps the G6 could happen in the past or in a future of space travel. We have seen an incipient tendency to put all generations in the same room, and the multiverse idea, “Ponyverse”, has opened up for almost anyone imaginable.
MLP has become the girls’ answer to the Transformers.

Background Pony #5648
Very interesting that the ban on humans that was introduced by Faust during the preparation of G4 and then became permanent throughout MLP with the exception of EQG, will possibly be allowed in the new series on G1 crossover with G4, although it is still too early. We do not know if the two witches, Grackle and Dyre, have been allowed to keep their humane appearance as they have not been shown. But the three ponies Black Belle, Shadow Storm and Violet Shiver are very interesting. They seem to manifest evil and trouble.

Speaking of future G5 comics; we do not know if IDW will produce them even though there are many indications, but it is promising to know that the comic crew behind FiM comics will dissolve so that they will start all over again without disturbing quarrels and noise. It is possible that Pencils, who will have to change his style, may be put to work - although several others will register their interest, both artists and writers. And since the crew behind the TV series now in production has a background in both animation and comics, they will not be as hostile as DHX had been under G4. There is hope that future episodes and comics can complement each other with fewer controversies than what was seen between DHX and IDW. It would be wise to keep it simple to begin with in future G5 comics.