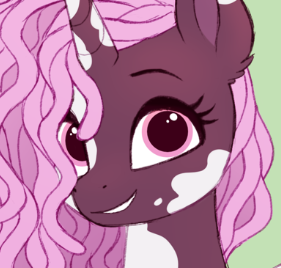 LoreJuniper
#1 Misty Stan
Dark twi sweep! <3
Posted 3 days ago Report
Link Quote Reply
Background Pony #8FCC
@Dogman15
In Latin America children can be VERY different skin tone wise and still be siblings. Luna can be black skinned genetically (not because of the sun) while having a Celestia as a white sister. Have you seen Encanto?
Posted 24 days ago Report
Link Quote Reply
Background Pony #8FCC
@Lolicoom
Agreed!
I humanize them based on their fur. So Twilight is brown skinned, AJ is tan, Fluttershy is olive, Rarity is white, Pinkie is rosy, Rainbow is simply neutral medium tone, Apple Bloom is a darker olive, Scoots is tan, Sweetie Belle is white, Spike is darker brown, Sunset is tan, Starlight is rosy, Celestia is white, Luna is black, Cadence is rosy and so on.

I don’t assign races to them as humans. It’s simply skin coloring, so most are like in a in-between shade instead of fully white or black.
Posted 24 days ago Report
Link Quote Reply 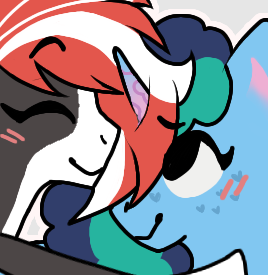 @Lolicoom
I’ve tried out the method before, you do needa boost the saturation, as the same saturation for a pastel cool color looks grayish on a warm color
Posted 1 months ago Report
Link Quote Reply

Lolicoom
The Swaggest Idol
@Briarlight
You don’t necessarily have to draw skin super saturated though. I wouldn’t really think they’d come out similar either. I guess it takes a bit more than just the brightness though.
For example, Applejack is orange so giving her tanned orange-ish skin would fit especially since she’s out working all day. It does need a bit of case-by-case though, you’re right

@Dogman15
Skin is only moderately influenced by sun. Believe it or not Luna can be dark without any sun. Even with siblings, humanized character are usually humanized on an individual basis, like how Luna and Celestia are usually drawn at opposite sides of the tone spectrum
Posted 1 months ago Report
Link Quote Reply

I'm not famous.
@Briarlight
That method semi-works for Luna, though. Weird, considering she probably spends less time in the sun than Celestia.
Posted 1 months ago Report
Link Quote Reply

Lolicoom
The Swaggest Idol
Personally I think the easiest way is to just do it based on how dark their fur is, especially for the sake of not having colours clash
Posted 1 months ago Report
Link Quote Reply

I'm not famous.
@Briarlight
BTVA doesn’t even have Misty added to her VA’s page yet!
Posted 1 months ago Report
Link Quote Reply

@Dogman15
Yeah, overt / “plain text” coded characters are basically 100% drawn that way, as it’d be kinda blatantly incorrect and kinda harmful not to. Also I’ve seen quite a few dark sombras yeah, idk how much in comparison to others but.
But yeah a black actor does tend to be a decent influence in coding a character.
The first blatant coded character that isn’t stereotype coding (nor using stereotype in a bad way), is Misty Brightdawn from g5. She’s blatantly black without being a stereotype like zecora or the buffalo’s, which I think is very impressive for mlp.

I'm not famous.
@Briarlight
If I could make some other guesses: The characters voiced by black actors (Brenda Crichlow, Doron Bell Jr, and Rena Anakwe) might have a higher tendency to be humanized with dark skin. Certainly Zecora (I would venture probably 100%) and Mage Meadowbrook’s mother (I haven’t seen anyone draw humanized art of her). Doron voiced Cattail and Trenderhoof, and my guess would probably be at about 80% for them. Rena only voiced Sapphire Shores, and I would guess 90% of humanized art gives her dark skin.
Brenda’s other characters are Matilda, Golden Harvest (in “It Isn’t the Mane Thing About You”), Amethyst Star (in “Slice of Life”), and Sprinkle Medley (also in “IItMTAY”). I would put them at a much lower likelihood for humanized dark skin.
Ironically, the other black actors (Blu Mankuma, Alvin Sanders, and Marcus Mosely) are all associated with Flutterguy (a temporary designation for Fluttershy), so they don’t count. Alvin Sanders was the most recent voice of King Sombra, but I don’t know if anyone’s humanized him with dark skin.
Past that, I feel as though most of the characters on this show are “coded” as “[not black]”. That is to say, “American”, “European”, “Indian”, or other kinds of white or Asian characterizations. At the end of the day, it’s down to the personal interpretation of each individual artist how they want to draw a character conceptualized as an animal but reimagined as a human.
Posted 1 months ago Report
Link Quote Reply

@Dogman15
I saw alot of humanizations of them while doing this. My educated guesstimation is:
-Celestia is heavy majority pale, with maybe a 1/4th split between tan and midtone
-Luna is half half pale and midtone/dark (midtone and dark have alot of overlap so), with a tiny bit of tan
-Cadance is majority pale. Its kinda like hitch where the fandom collectively agrees theyre white af

I'm not famous.
And I bet if you analyzed the three alicorn princesses, Princess Luna would have a higher percentage of darker skin examples than Celestia or Cadance.
Posted 1 months ago Report
Link Quote Reply

Music Connoisseur
Damn, I was expecting AJ to have the least number of humanizations, but no surprise Twilight is number one
Posted 2 months ago Report
Link Quote Reply