Pony with care My Little Pony: Make Your Mark Chapter 2 was just released, so remember to tag images of/about the latest episodes with the appropriate tags
57 83 73 10 25
Subscribe
Galleries
Featured in
Sign in to create a gallery
Related
View VS Download DS
Uploaded 15 days ago by Ring Team

I am who I am
@hironakamura
Sounds incredibly risky, with a low chance of success (if Twilight enchanted the crystals properly). I’m also guessing that Opaline is very egotistical - in other words, I’m guessing that, 100%, that’s her plan.
@Background Pony #4A9F
Hm, maybe she attempted to force herself to become an Alicorn using some forbidden spell, and in the process her mind was corrupted.
Posted 11 days ago Report
Link Quote Reply

@Jonny Manz
Maybe she plans to untangle magic from the crystals so magic can’t be shut off. That’s what I would do.
Posted 13 days ago Report
Link Quote Reply
Background Pony #4A9F
@Jonny Manz
The comics state she was a unicorn. That’s another can of worms by itself. Otherwise, Opaline isn’t the cause. The catalyst yes but not the cause.
Posted 13 days ago Report
Link Quote Reply

I am who I am
@Fair Use (Optimisitc Neighsayer)
I’ve seen a theory that it’s meant to measure the general harmony or discord amongst ponies cumulatively, so that it couldn’t be undone by just a simple disagreement (so when ponies are generally harmonious, and acting kind towards one another, the crystals are fine, when the score is right around zero, that’s when glitches start happening, and then when it enters discordant territory, that’s when the real trouble starts). I can see that, and I think the reason it seemed like any disagreement would cause it was the fact that, due to the budgetary and time restrictions the special faced, the scale felt much smaller than it’s meant to be, so every action seemed of greater importance.
Personally, I think the crystals are a magical flow regulator, plus a failsafe if something goes wrong. A magical control valve in that the ponies’ magical biology probably naturally atrophied over the many years of having no magic, so they’re slowly but surely reintroducing more and more magic back into Equestria as ponies can handle it without it causing them to go out of control. Once the magic has reached the full strength it was back in the days of Ancient Equestria, the crystals will perhaps cease to be. Then a failsafe in that if anything goes seriously wrong (like, say, the villain that caused Twilight to create the crystals in the first place returns), they crack apart and strip magic from the world forever.
Also, it’s a bit beyond the scope of this image, but I’ve seen some people say Opaline doesn’t make sense because if she tries to steal the magic or the crystals, it’ll just go away again and she’ll be back where she started. I don’t agree with this - I don’t think that’s her plan. I wonder if her plan might be to bring the ponies all under her hoof, unite them in worshipping her (perhaps she feels that will cause the crystals to not detect a problem). See, I wonder if, perhaps, that villain that Twilight faced in the past was an ancient tribe of Alicorns, but unlike Celestia and Luna, these ones were not benevolent. Rather, they believed that, as the most magical beings in the world, they were also the most perfect, and deserved to be worshipped as gods by all creation. Before they could launch an assault to bring the world under their hooves, Twilight, knowing that there would be massive casualties in attempting to stop them, sealed the magic away. Although it affected everyone, it was especially hard on the Alicorns (because, again, they’re simply so magical). Opaline would then be the last of these Alicorns, only surviving because she was very young when it all happened.
I dunno, even if that’s not what the show and comics go with, I like that theory.
Posted 13 days ago Report
Link Quote Reply

@CORDZ2000
Its not just Sprout’s mom. I’m talking about general knowledge the earth ponies have about other tribes that was passed down from generation to generation. Even their very schools teach them this knowledge. Their media and movies teach them this knowledge. Phyllis had nothing to do with those things. She was exposed to that kind of knowledge herself just like every other earth pony.
@Background Pony #E4A8
No one was a victim or abuser here. Its all a matter of culture. Its the earth ponies culture to fear unicorns. There’s probably a reason behind it like how its related to their magic.
Posted 14 days ago Report
Link Quote Reply
Background Pony #E4A8
@CORDZ2000

It happens that the Victim of abuser can’t be always a victim, when the person turns into abuser him/herself and consequently both deserves punishment and this is example in many media, such as Planet of Apes Trilogy Reboot.
Posted 14 days ago Report
Link Quote Reply

@CORDZ2000
Sprout’s fear of unicorns is very interesting. Look at how he sees them as a kid. They shoot horn lasers. They read minds and fry brains. A kid who has never seen a unicorn his whole life would not make that up. But to us who know what unicorns can really do, its not far fetched. They sound like stories told to little kids by their elders but I bet in g5’s in universe history, there’s truth to those stories when the three tribes fought each other.
Posted 14 days ago Report
Link Quote Reply

CORDZ2000
zcord
Sprout, posey and old man discord are kinda right in a twisted way. For sprout while he not all unicorns are evil, they do seem to be the most common villains out of the pony types. With old man discord yes magic has caused conflict over the years but people and/or mlp ponies will still even with that weapon. In magic has other uses beyond just for conflict.
Posted 14 days ago Report
Edited 14 days ago
Link Quote Reply

Starlight is the easy example but even Twilight abused her magic too. She enchanted a doll that mind controls ponies into desiring it.
“Ponies don’t use their magic on each other.” That’s wrong Sunny. If you’re gonna let magic back into your world, you have to be prepared for its consequences.
Posted 14 days ago Report
Link Quote Reply
Background Pony #4A9F
@PuffyDearlySmith
Unless you count the IDW comics where Sunny is anything but hostile to her legends. Including Discord.
@PuffyDearlySmith
Every image involving her has been nothing but excuses with no definitive proof or any evils she did since S6. And that season is pretty much the only one that details the entire redemption process since everyone else only needed an episode or even a minute. Furthermore, of every choice of character he uses, he chose to pick those to suit the irony rather than because they fit better. Luna was an ex-villain chastising Twilight for bothering to even save her enemy in the first place than killing them or worst, Sunny suddenly saying g4 is lame even though that was her driving force in the first place, Twilight not considering talking to her enemies? All to spite Starlight. Shadow Play would have turned out different if the latter didn’t suggest Stygian can and could be saved in the first place. Stygian would’ve rotted in Limbo if that thought never happened. So by bashing Starlight, he undermines the other characters too.
@Pause
Let’s see Trixie, Twilight, Sweetie Belle, nah, the list is infinite.
@Fair Use (Optimisitc Neighsayer)
It’s really equivalent to a death sentence for simply littering. The Crystals do more harm than help. As quoted by the Spirit of Chaos. Who may or may not have possessed some real guy already cause that’s exactly his shtick. Twisting the facts and being an unreliable, not to trust narrator.
@Mr.Myoozik
If anything, I think they prefer to just forget about her. Of course these other guys can’t forget or forgive because they can clearly remember every lesson that’s meant to perfect yourselves. Forgiveness is key in bettering yourselves and others, empathy too, which they lack and finally we’re not computers, we can’t remember the good lessons sometimes. Fluttershy said she even forgets the Aesop from time to time.
Posted 15 days ago Report
Link Quote Reply 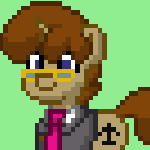 Excitedly Detached
The thing about “ponies being forced to like each other” was more than just Poesy being a prick. It’s just the thought that any little disagreement can cause the Unity Crystal magic to flicker, as Zipp demonstrated when she explained it to the rest of the Mane 5. (And if her demonstration only worked because like Posey she deliberately caused discord for her own ends, it certainly wasn’t clear, as the crystals seemed to flicker or magic otherwise went wonky without any Posey connection at times.)
There’s consequences and then there’s just being punitive, and that makes a lot of folks uncomfortable. Putting these consequences on a metaphysical (as opposed to a social) level might even be counterproductive to actual character growth as they seek to just keep the crystals “satisfied” rather than take it to heart and actually deal with the consequences as they relate to others.
Posted 15 days ago Report
Edited 15 days ago
Link Quote Reply

Pause
World's Smallest Violin
I love how when Starlight showed up so many people moved onto her being the screw up with magic.
As if no one else with a horn has ever done something stupid with magic.
No one
Posted 15 days ago Report
Link Quote Reply

Noob who ships Twinkie
The main driving force behind Posey’s attitude (and that of some of the other earth ponies in Maretime Bay) was jealousy over the fact that the unicorns and pegasi got their magic back but not the earth ponies. Combined with still lingering racial tensions and that was the main conflict of the first Make Your Mark special. Plus even after being saved by Sunny and getting earth pony magic we’ve seen Posey be unpleasant to others in Tell Your Tale with no justification. It had little to do with anyone potentially misusing their magic and it just seems the Ring Team is just using that as an excuse to bash Starlight despite her not being mentioned in any G5 material thus far.
Posted 15 days ago Report
Edited 15 days ago
Link Quote Reply
Background Pony #4A9F
In short, Twilight was right in taking away the world’s magic and punishing the entire world for the ponies own fight. Discord was right in that he should destroy the Crystals so it can no longer harm anyone else but also take away magic again and Sunny and friends were wrong in stopping him and her own ideals altogether from restoring magic in the first place since it was better after and before anyway. So that means Sunny should’ve given up trying to unite the races in the first place to prevent magic from coming back and hurting them. And the movie wouldn’t even kick off at all.
Is what your saying.
Posted 15 days ago Report
Link Quote Reply