(Well, happy BELATED Australia Day. I am super sorry for the delay.)

The best holiday from the best country in the world has come back! Even though this is a day late in the Land Down Under, I enjoy celebrating this wonderful day! Australia will always be my favorite country. Everyday I dream of going there, and see the sights, meet the people living there, encounter the unique wildlife, and much more. And if that isn't awesome enough, Jim Miller finally confirmed the equivalent of Australia in Equestria last year: AusTAILia! I was so ecstatic about this. And I'm sure you Aussie Bronies are happy to hear that too.

I know I apologized before, but I am so super sorry for not uploading anything on the actual holiday. For those who didn't see my latest status update, I've been struggling with a lot of creative and emotional turmoil over an idea. Artistic block is one of the worst things to ever exist! Originally, this was going to be this year's Aussie Day submission, but after I did new vectors of MLP:FIM's only Aussie ponies, I struggled over the background. However, when I had the epiphany of doing one featuring me and my Aussie friends with the Australian flag as the background, I decided to put in my new AusTAILia flag as the background. And now I'm content with how it turned out.

So here are the only Australian characters (or Austailians) in My Little Pony: Scootaloo's father Snap Shutter, his sister Aunt Holiday (Who would've known that Scoots was part Australian), and Washout Rolling Thunder. I know that episode, "The Last Crusade," was big in finally giving us Scootaloo's parents and lesbian aunts, but the fact that her father and aunt were Aussies just brought joy to my heart. Heart And I should've realized that Rolling Thunder was Australian as well. Sweating a little… I only wish that Austailia was featured in the show; I would've had fun recreating the background.

I hope you all love this and I hope my Aussie mates had a wonderful Australia Day. Heart Thank you for being such fair dinkum friends. Hug Heart

And let us pray for Australia. Bushfires are ravaging the ancient and beautiful land, and so many koalas have fallen prey. Let us pray that the fires stop and that we can save the koalas and every other animal living there. Pray

Here's the Oatstralian National Anthem from Oatstralia: On Air. Now that it has been confirmed that Austailia is Australia in MLP:FIM, it's now Advance Austailia Fair:

Austailians, all let us rejoice,

For we are all bronies.

Equestrian soil, with hooves we toil,

Our lands abound with strong friendships,

Of filly, colt and mare.

For every age, our love we'll wage,

With cutie marks, then let us sing: 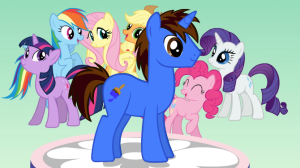