63 comments posted
Background Pony #1C2E
This design is flawed!
Posted about a year ago Report
Link Quote Reply
Background Pony #7C78
@Beau Skunky
My favorite season has no impact on the validity of what I'm saying. Those "rumors" were mainly memes and jokes that people didn't take seriously, and were on the lines of AJ being into incest, Rarity being a whore and RD being a lesbo.
I don't think she was exaggerated at all. Sure a little random, but she was funny and had more to her. Later on she just became flat-out stupid and there's a good chance she's going to be like that in Pony Life too.
"What you, and others consider "garbage" or "not garbage" is debatable"
Well yeah, that's why we're having this debate?

@northern haste
That was played off more as a joke for comedic effect. It was a quick way to further establish that she's a wuss in a jokey way. Sure there might've been some exaggerated character moments early in the run but they became very common later on.

Cute wittle skunku
@northern haste
Not to mention, some actually hated "Lesson Zero" for how it treated Twilight. (Though, I see it as just a harmless gag episode, and it at least does end on a touching moment.)

I think some fans forget MLP:FIM has always had some Looney Tunes or SpongeBob style humor sometimes. Regardless, despite all the craziness, the show never seems to lose it's innocence.

Enter if you dare
@Beau Skunky
Seasons one and two did have some Flanderized moments.just at the top of my head we had a team making a big grand entrance in dragon quest and fluttershy shame being scared of her own shadow in dragonshy
Posted about a year ago Report
Link Quote Reply

Cute wittle skunku
@Background Pony #ABFB
Let me guess, Season 1 is your favorite season. (The Season that gave us the "Pinkie is probably a psychopath" rumors/memes ironically.) So honestly, I feel Pinkie has been occasionally exaggerated, or Flanderized back then, as well.

What you, and others consider "garbage" or "not garbage" is debatable. In regards to that video game simile, there are constantly negative people that regard even "popular" or debatably "good" game franchises like Pokémon as "garbage." So frankly, just be prepared for people to disagree with you.

@northern haste
True, so G4 isn't quite dead yet.

Enter if you dare
@Beau Skunky
Also if you want to get technical if you count the comics we're still getting g4 content
Posted about a year ago Report
Link Quote Reply
Background Pony #7C78
@Soctavia
@Beau Skunky
there's a difference between pinkie pie being an annoying screeching retard and someone who's hyperactive and silly. It's not her entire character. The first ever thing we've seen of her regarding pony life makes her seem like it's going to be the former.

@Background Pony #7AAA
Well, judging by how the style looks and the amazing "quality" of the final seasons, the chances of it being good is very small. I'm going to judge by the information that's currently available to us, and the little we have doesn't seem promising. It's like when people get skeptical when a garbage game company is about to release another game. People don't typically go "wow, this could be amazing!", instead people with decent pattern recognition skills will predict that it's most likely going to be another cash-grab like all the others that came before it.
EDIT: And if it's good, then boom you're pleasantly surprised.

Cute wittle skunku
@northern haste
Yeah, and those likely aren't going to represent how the final show will look.

Meanwhile, "Pony Life" isn't even really G5, it's more like a break between generations.

Cute wittle skunku
@Background Pony #7AAA
Yeah, though then they accuse those people of being "blinded by love," and such…

I can't believe I'm actually still seeing people calling others "Hasdrones," just because of that… (Remember back when people hated Equestria Girls before it came out, and bashed people for wanting to give it a chance? Now it practically has it's own fanbase.)
it's funny how history keeps repeating itself.

Cute wittle skunku
@Soctavia
The only episode I can think of where she was surprisingly calm, and barely did anything crazy/comical was "Lesson Zero," AKA the "Twilight Snapple" episode. I guess they had to limit themselves to one crazy pony in that ep'.

Granted, Pinkie was hardly in that ep'. 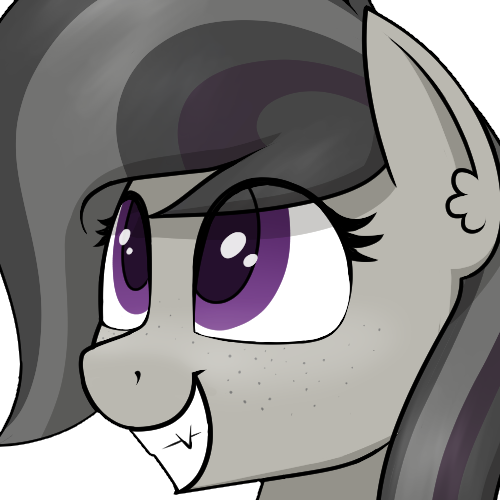 "THAT'S HER ENTIRE CHARACTER"
If we're talking about flanderized pinkie pie then sure I guess?

So are you trying to say that being a crazy, (not the bad kind of crazy, mind you) hyperactive, fourth-wall-breaking, constant-sugar-high-having, silly-face-making goofball isn't her character?

Now if you come back and point out the few moments where she's not any of those things, then that would be cherry picking. Obviously she has her down and more calm or "normal" moments, but you can't say that makes up more of her character than when she's her normal, hyper self.

In fact, Faust said she actually wanted Pinkie to be crazier then she was portrayed in the show. So the Pinkie we got was actually a toned down version. Let that sink in…

Leading Kirin Expert
@Background Pony #ABFB
How in the world is that cherry picking? There's hardly an episode that goes by without her making weird faces and doing crazy things.

Cute wittle skunku
@PonyMod2
What this?
This image is blocked by your current filter - click here to display it anyway


Though, it's not like Pinkie never looked weird/crazy before.
This image is blocked by your current filter - click here to display it anyway

PonyMod2
Alternate MK
She looks cute, but the series seems to be kind of bad as a whole. I do like the pony design, though.
Posted about a year ago Report
Link Quote Reply
Background Pony #EE55

Hash value is #55EE
@Beau Skunky
I'm coming at you.
Coming at you to say I totally agree.