And really, most villains in 80s cartoon shows were incompetent and laughable. I don't see what makes the 80s version of Grogar any different from Shredder, Megatron, Gargamel, Cobra Commander, Magica de Spell, Duke Igthorn, No Heart, Skeletor and Mumm-Ra.

Mainly because he was a one-shot villain who only appeared once, and yet he got a massive fanbase while most of the other g1 villains do not. Most of those villains you mentioned were major villains who appeared in nearly every episode of their respective shows, which means that whenever any of those shows are reimagined, that villain has to be included in some form, probably as a more nuanced and interesting character this time around.

Sure, of course Grogar could have been given the same treatment in MLP FIM, but they really should have done so way sooner than season 9, or at least have him do something before gathering the Legion of Doom. As he was, he really was more of a plot device than a character, so I didn't care about him.

Also, you still haven't answered what makes Grogar any special compared to the other g1 villains. Why should he be given this big important role in the series and why the others are left in the dust and forgotten?

This actually dovetails nicely with the picture itself. Before "Iron Man 3", the Mandarin was well-respected as a villain, and the Ten Rings were seen as legitimate badasses. After "Iron Man 3" came out, suddenly everyone was like "Mandarin was a racist stereotype in the comics!" and "the Ten Rings are a stereotype of Middle Eastern terrorists!".

My point is, all of this "I don't see what the big deal was with Grogar in the first place" wouldn't have happened if the twist hadn't happened.

And really, most villains in 80s cartoon shows were incompetent and laughable. I don't see what makes the 80s version of Grogar any different from Shredder, Megatron, Gargamel, Cobra Commander, Magica de Spell, Duke Igthorn, No Heart, Skeletor and Mumm-Ra.

Flufux Corporations
@Background Pony #0215
Are you for real? The Daleks were the sole reason Doctor Who survived past the 60s, and every time they've been brought onscreen has been an attempt to make them scarier and scarier. They earned their reputation by appearing again and again for decades, and have since become one of the most iconic pop culture monsters of all time.

Grogar on the other hand appeared in a single episode of the old My Little Pony cartoon, and was presented no differently than other g1 villains like King Charlatan, Lavan, Queen Bumble, Arabus or those three witches. He never made an appearance in any other piece of official media until season 9 of g4. Comparing him to the Daleks is extremely unfair.

With Tirek and the Smooze I can get why they would be so iconic, I mean Tirek was the first villain in MLP history, period, and was very dark and threatening for coming from something called My Little Pony…while the Smooze showed up in the full-length movie and had a very iconic musical number. Grogar on the other hand…I just don't get what made him any different than Squirps, Lavan or Arabus.

Heck, the only versions of Grogar I've seen where he is this dark, super-powerful necromancer that people claim he is comes from fanfiction. Seriously, I've heard so many people call him a necromancer for some reason, and I have no idea where people got that idea from.

@Lord You Know Who
Also, on a completely different note, I actually don't get what made him so popular in the first place. I saw 'Return of Tambelon' awhile ago, and he really didn't seem all that different from the other g1 villains, as he was just as goofy, incompetent and one-dimensional as pretty most Saturday morning 80s cartoon villains. At least g1 Tirek had an intimidating voice, turned ponies into dragons and threatened to cut Spike's head off…while Grogar himself didn't come near to the same level of intimidation.


By your weird logic, if villains aren't badasses when they're introduced, they're "goofy, incompetent and one-dimensional". Might as well add The Daleks to your little list while you're at it…

Hmm, perhaps it could've been an interesting idea to have Sombra get backstabbed, be caught off-guard in his scheming for once, and go crawling to the heroes for help, lol. (Hey, it would be something other than him just dying again, I suppose; perhaps he could've been the next Discord in a way)

The thing that would be iffy on "just about the same" would be Tirek getting up to his second form, and how proactive Sombra would've been in comparison.

And yeah, I think Tirek was definitely a more… imposing G1 villain.

Also, Sombra needing them when it's clear he got defeated under Celestia and Luna's combined power in his backstory would add up more than whyever "Grogar" didn't decimate Celestia before the series began, even if he were like, half as powerful as he was in S9 (that just wouldn't be the most ideal time to do anything, probably).

Flufux Corporations
@Lord You Know Who
They could have honestly done the Legion of Doom without Grogar period, just give Sombra the same role and things would work out just as well.

As for Grogar himself. If I was to use him in the show, then he should have been the main antagonist of a two-parter before the finale…and then have him join/form the Legion of Doom later on after being defeated the first time. As he was presented, I really didn't care for him all that much.

Also, on a completely different note, I actually don't get what made him so popular in the first place. I saw 'Return of Tambelon' awhile ago, and he really didn't seem all that different from the other g1 villains, as he was just as goofy, incompetent and one-dimensional as pretty most Saturday morning 80s cartoon villains. At least g1 Tirek had an intimidating voice, turned ponies into dragons and threatened to cut Spike's head off…while Grogar himself didn't come near to the same level of intimidation.

OK, fine, but why couldn't they have the Legion of Doom WITHOUT the Grogar twist?

As the first post in this thread said, they took one of the most iconic villains of G1 and wiped their asses with it.

I mean sure, when you break it down, Grogar wasn't "original" and he didn't have a personal vendetta against the Mane Six…but he was still menacing and powerful, so turning him into a punchline seems like a waste.

You can't pull that "Grogar isn't original" crap when the three villains who replaced him aren't original either.

Them teaming up is.

And those villains are "new" how?

Nightmare Moon was the first villain of the show period, so she's much more significant than G1 Tirek returning.

More powerful than anything seen before? Discord did it before Tirek.

Subverting the magic of friendship? Discord, Sunset Shimmer and the Dazzlings all did it before Cozy Glow.

You can't pull that "Grogar isn't original" crap when the three villains who replaced him aren't original either.

I feel like, if the twist didn't happen, people wouldn't be so harsh on Grogar.

Not necessarily. I was excited for Grogar when he first showed up in the premiere, however, as soon as the villains decided to betray him in Frenemies, I stopped caring about him very quickly since the trio were just so much more entertaining villains and I really wanted them to be able to pull off that double-cross.

I feel like, if the twist didn't happen, people wouldn't be so harsh on Grogar.

The whole "what makes this villain different than the rest" can be applied to any Equestria Girls villain other than the Dazzlings.

Flufux Corporations
@northern haste
That is a good point. I mean, what is it really that Grogar brings to the table that we haven't seen before?

He's a beloved g1 character who finally makes an appearance? Tirek and the Smooze did it first.

He's more powerful than anything we've seen before? Tirek also did that first.

He's got a powerful magical artefact that can steal magic? The Storm King says hello.

He's the first villain to think that the villains need to use the ponies strategy against them? That's Cozy Glow's entire philosophy with the whole 'friendship is power' shtick in a nutshell.

He's a goat? Okay, fine, no one's done that before I guess.

Honestly, the fact that it WASN'T personal made him MORE interesting, not less. Villains with personal vendettas against the hero are overplayed and overdone, and it takes away from the menace. It's far cooler AND scarier when the villain has his/her own goals and the hero is just in the way.

The fact that Grogar didn't have a score to settle with the Mane Six made him that much cooler.

MLP's finale might have been rushed and focused on the wrong things, but at least it didn't systematically ruin the world building and character assassinate all the surviving cast one by one. 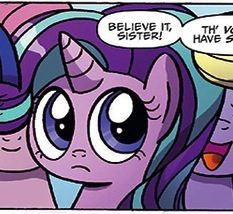 Posted about a year ago Report
Link Quote Reply
Background Pony #175B
@Background Pony #573A
Yyyyep.
And its not only getting tiresome, but now it starting to feel like this fad is "Beating a dead horse" ( literally) while milking it exploitively