Derpibooru Community Collab! It is time for us to make another community collab image! Let us all have fun and draw some pony. Learn how to participate here.
27 38 36 2 17
Subscribe
Galleries
Featured in
Sign in to create a gallery
Related
View VS Download DS
Uploaded 1 years ago by Mildgyth

17 comments posted
Background Pony #4EEC
@Prometheus labs CEO
Jumping spiders are awesome! I wish more people knew about them, because there would probably be less arachnophobia.
Posted about a year ago Report
Link Quote Reply 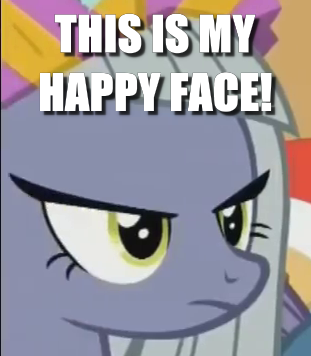 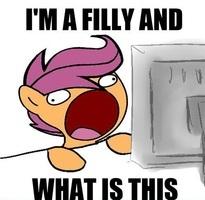 Exelzior
@Daneasaur
I actually sat down to watch it in italian to try and suss anything out, and you're probably gonna end up being on point that the epp is trash. I'll wait with the judgement until I hear it in english, but from the imagery alone, you can see where it's going pretty fast.
Posted 1 years ago Report
Link Quote Reply

Daneasaur
@Exelzior
When I see something that isn't in another language or a pocket cam leak, I'll let you know.
@QueenCold
Zecora's rhymes were supposed be how she was learning "ponish" by using words that sound alike and not supposed to be a perpetual thing. Cute new writers coming in and going LOLOLOLOLOLOL RHYMES!

Exelzior
@Daneasaur
Hold on, failed artist, genocidal tendencies…we got ourselves a real dragon Hitler right there.

Joking aside, I have been waiting for your take on this epp and this little development, I enjoy reading your takes.

@Masem
I wasn't expecting it to be amazing.

Honestly, how many characters with a specific gimmick like this are actually amazing at it in the show? Even Zecora's rhymes are often questionable.

@QueenCold
The impression I got (Based on reactions and timing) is that his poetry is not great, not Vogon-levels of bad, but not mind-blowingly amazing.
Posted 1 years ago Report
Link Quote Reply

Look how they massacred my boy!

@Starswirl
People often forget how awful the actions of other characters are in comparison to what Garble's done because he's been treated with much more negativity by the narrative. He and Ember were always a lot more similar than people like to think. The biggest difference between them doesn't have anything to do with any of their actions, but how much the show wants you to like them. This doesn't mean Garble is a particularly sympathetic character. In fact, it's the other way around. Ember gets much more credit than she deserves based on her actions alone, but the show has always wanted you to like her so the treatment she gets is completely different. (even when she threatens a world war over a kid voluntarily leaving)
Part of it is also timing. That bad first impression we got of Garble happened way back in season 2 and we wouldn't learn anything about dragons for years to come. Besides being one of the worst characters at the time he was also the face of the worst dragon episode for years. He didn't get dethroned until Sludge came along. This is why some people still seem to think that Garble is particularly bad for a dragon, even when the show constantly demonstrates there's no real reason for us to think he's an exception rather than the rule.

Starlight's actions weren't just going to doom the mane 6's friendship, they were going to doom Equestria. But she didn't even get a slap on the wrist. Heck, Rainbow Dash, one of the main characters, has some pretty bad stuff on her resumé, including but not limited to sabotaging a weather factory and trading one of her friends into indentured servitude.

With all this in mind, I don't think he's unfit as a candidate for reformation. As for the execution, I will reserve my judgment until I've seen the episode. Poetry seems like a very odd choice for him, though. If it turns out that he was faking being dumb as bricks and having a severely limited vocabulary, I'll have a really hard time buying that.

@Daneasaur
To be fair, Starlight was willing to ruin six ponies' lives forever for the sake of revenge. And I'm not talking about breaking up their friendship, she was out to take their Cutie Marks so they'd never get them back in the second episode she appeared in.
Posted 1 years ago Report
Link Quote Reply

Daneasaur
@Starswirl
As I said, still many bumps in the road.


@Masem
It doesn’t make garble sympathetic in the slightest. He’s been the alpha male of the "teen" dragons and has out performed every one of them. He was also going to win the gauntlet of fire and it required Spike AND Ember working together, along with a distraction of Twilight and Rarity in order to keep him away from the scepter. Why was it so important to stop him? Because his rule = Full on dragon war with equestria.

Garble is a dragon. A home grown dragon with no pony philosophy in his life. It’s been shown that ANY weakness is exploited by other dragons for personal gain. Ember was unique in that her father actually cared about her, so much he refused to let her participate in the gauntlet (with good reason as, without Spike, she would have died shortly after the starting line). Moreso, who was the one who smashed into her and made her fall? It was Garble.

Ember had a predisposition to kindness other dragons don’t showcase. Smolder, being a prime example of this point, relishes stories of abuse, loves dispensing harsh news to others, and was overjoyed to make Spike think his life was over. While showing that she HAS a soft spot she’s horrified to show is nice, it doesn’t change what she actually has done in front of, or to, others.

Garble had a chance for redemption, and the episode was called Shadow Play. So, did he calm down any? Nope, he was as aggressive as ever, and exploited a loophole in the dragon lord’s law so he could attack Spike. If anything, he was MORE aggravated than before.

But no, lets just forget about that, forget about his genocidal goals, and feel sorry that his art project isn’t going as planned.

@Daneasaur
They gave his a reasonably proper out — he acted mean because he does have a sensitive side and wanted to hide that. Doesn't massively contradict any other ep with Garble, and having Smolder as his sister that knows of this side, helped to explain why it was there.
Posted 1 years ago Report
Link Quote Reply

@Daneasaur
Chaos is his nature, being a jerk is not. He does that because he likes being one.
Posted 1 years ago Report
Link Quote Reply
Background Pony #079A
@Daneasaur

Did you even see the episode?

Daneasaur
It's official, the episode is trash.

Making Garble the brother we're supposed to have sympathy for is the stupidest thing in the world. It's not the same as the other reformed villains;

Discord IS chaos, it's his natural state of being and to try and get rid of that, he'll outright cease to exist. His reformation wasn't easy and still has many bumps in the road.

Starlight wanted to get rid of the mane 6's cutie marks. Ending the world as we know it wasn't her goal and when she was shown that doing the time travel shenanigans caused the death of all things, she stopped.

Garble has nothing positive about him. He is a home grown dragon, meaning he lives by the code of being a ruthless cutthroat and taking pleasure in the ruining of those weaker. His goal as dragon lord was to genocide equestria with a full scale war for no reason other than his hatred of ponies. He also is dumb as a bag of rocks, so being "artistic" makes even less sense since he's obviously a meathead who's interests are crushing the other dragons in sporting events or even in a literal sense.

Even when shown moments of compassion, what does he do? "Haw, knew you'd do it." and then takes off.

At least chrysalis could be excused with insanity.

FSin
What is it with brothers on this show being beatniks in later seasons?
Posted 1 years ago Report
Link Quote Reply