49 80 66 14 104
Subscribe
Galleries
Featured in
Register to create a gallery
Related
View VS Download DS
Uploaded 2 years ago by Background Pony #5538
1731x1737 JPEG 1.13 MB
This image is blocked by your current filter - click here to display it anyway

Lady of Ships and Birbs
@The Smiling Pony
I was in camp "They're teasing at the relationship but I doubt they'll go all out with it" so I was also glad to be wrong.
Posted 8 months ago Report
Link Quote Reply

✨DRAW MORE FLEETFOOT✨
I did not expect to be wrong on this. Am glad I was, though.
(though, it was a fairly small detail still…)
Posted 9 months ago Report
Link Quote Reply

Lady of Ships and Birbs
@Kibate

The tea is exceptionally good today. 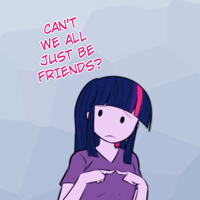 Because if we were, i would reply with something like:
This wasn't an exception. They laid out hints after hints. Sure, if it were only ONE instance, then one might say "they are just close friends, some friends do stuff like holding hands", but if several instances of closeness and valentine and comparison to het couples happens, that is more than just "eeh, some friends do stuff like that".

The fact that even NOW, after their marriage, there are still people who deny the canon just further laments the point that people willingly try to deny the evidence.

But like i said, that is something i WOULD say, if we were to try open the can of worms again. But we shouldn't ;)

@Kibate
let's be honest this was an exception. he still pretty right.

Why do people always ignore every other instance of Bonbon and Lyra together when it comes to "debunking" the lesbian theory?

Posted about a year ago Report
Link Quote Reply
Background Pony #36F1
>the CMC give a large, hoof-made gift to their teacher on the same holiday

A Jagged Metal Enchilada
@Commune
Best friend? I thought she was a streamer that got a boyfriend.
Posted about a year ago Report
Link Quote Reply

Mal Hearts
@DarkObsidian
Agreed on all of your comments. It's more of how you interpret them.

Which is why I am against the mods SJW-esq decision to make it seem Lyra and Bon Bon are a Canon lesbian couple. It's pretty much removing the interpretation.

Mal Hearts
Or they're very close friends who give each other gifts on a holiday meant for it. I do the same with my best friends on Valentine's Day, so it's no different.

@cheezedoodle
No they're not. They can't be officially a couple if they're unconfirmed.

It's just the writers teasing the fans.

Okay, I hope you understand me right. I'm a fan too. But you can't blame part of the fandom to be… suspiciously. Because the show IS teasing it. Without any clarification. ;-D

Well, nevermind. Just let us all be strong in our beliefs. In the one way or the other. There is no right or wrong about LyraBon. Because Friendship is epic.

Site Moderator
Friendly Neighborhood DM
@DarkObsidian
It's not teasing. They are officially unofficially married, or at least in love.
Posted 2 years ago Report
Link Quote Reply

Site Moderator
Undead inside
@DarkObsidian
It's not a teasing I was ever a fan of.
Posted 2 years ago Report
Link Quote Reply

Well, it's about the writers continuous teasing the fandom. On purpose. ;-D

Site Moderator
Undead inside
Just let people ship what they choose to ship. Some people don't even ship the married couples the show has to offer, if people don't like Lyrabon, that's perfectly fine.
Posted 2 years ago Report
Link Quote Reply

Posted 2 years ago Report
Link Quote Reply
Backgroundpony
@Background Pony #0CF1
And you try to enforce the oposite on others.
U No better

@Background Pony #0CF1
It's funny though that DHX choose out of all those friends in the series to ALWAYS feature Bonbon and Lyra to be in heats and hooves day and other related material. Isn't it an oddly huge coincidence?
Posted 2 years ago Report
Link Quote Reply