Looking at my past. Oof
@97blackbird
Lmao. Every holiday, a holiday late.
Posted 11 months ago Report
Link Quote Reply

Go fsck yourself
Happy Monday, everyone! No, wait…holy crap, how did so much of the last…what, page and a half, or more, slip by me?!

Anyway, glad to see you two still around. I’ve survived this holiday, luckily with minimal PTSD-triggering and subsequent usage of medications to control it. Thank Celestia that asshole firing a literal cannon at completely random times last year blew his face off (or so I like to believe 😊).
Posted 11 months ago Report
Link Quote Reply

97blackbird
@BigBuggyBastage
heh!
We love the neighbors most that were hear the least!
Posted 11 months ago Report
Link Quote Reply

Looking at my past. Oof
@BigBuggyBastage
Oh no! Well, at least you’re back now!
And that cannon thing, well, at least now there’ll be peace.
Posted 11 months ago Report
Link Quote Reply

97blackbird
I’m back from my vacation to Northern AZ. It was beautiful! 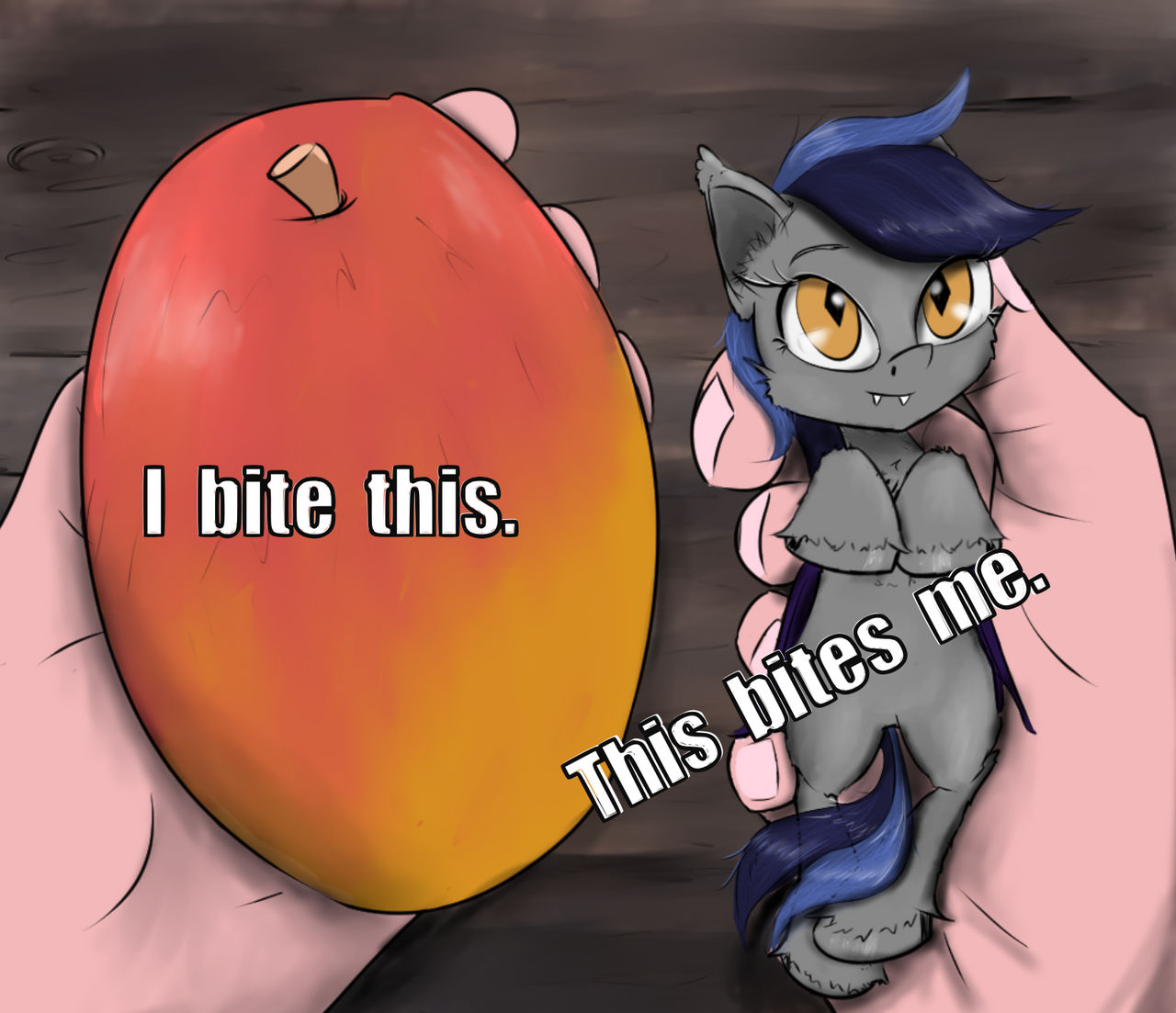 Looking at my past. Oof
@97blackbird
Ooh, Arizona? Sounds hot.
Bite the pone >:)

Looking at my past. Oof
@97blackbird
Nice! Got any pictures?
Posted 9 months ago Report
Link Quote Reply 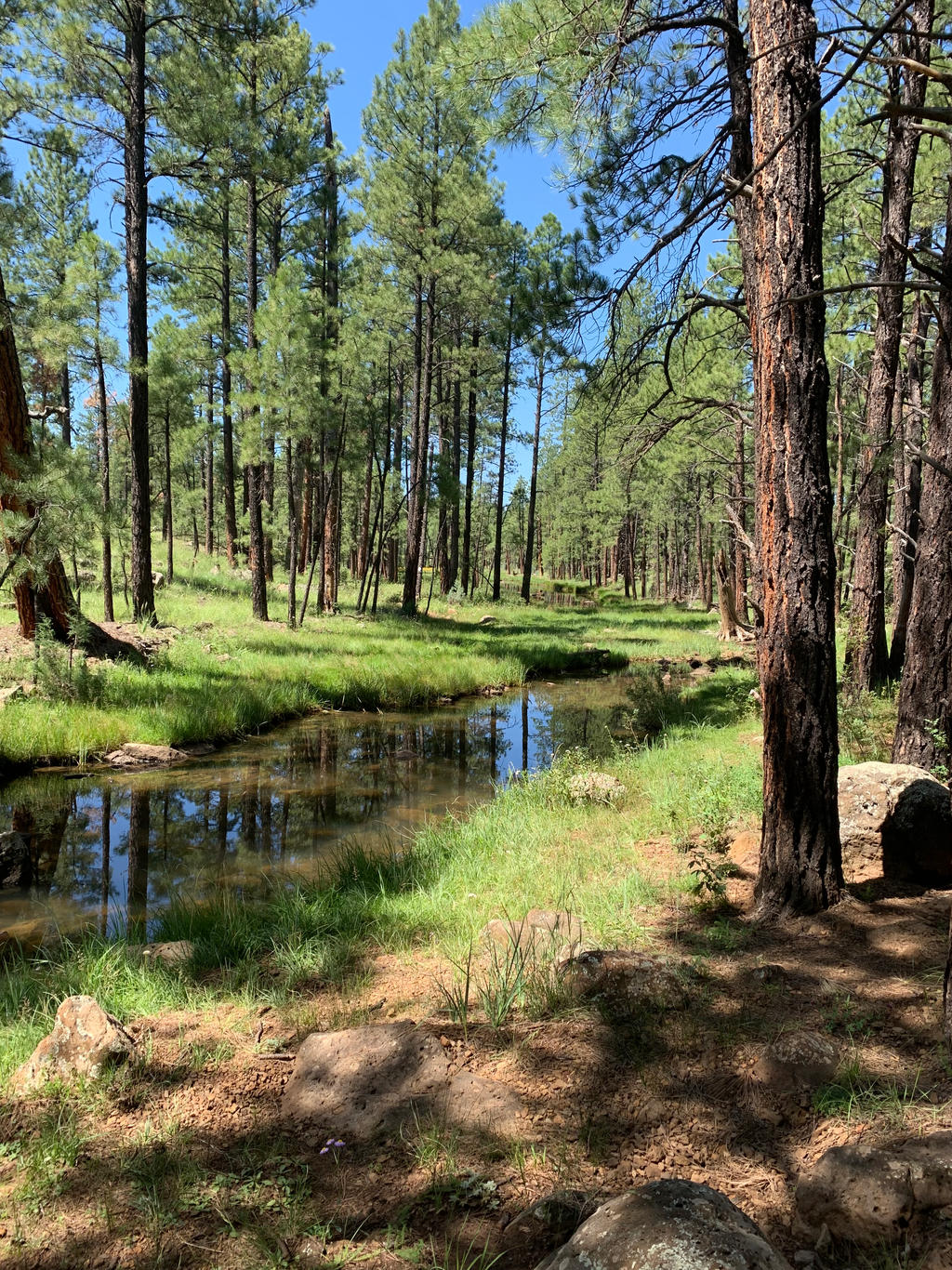 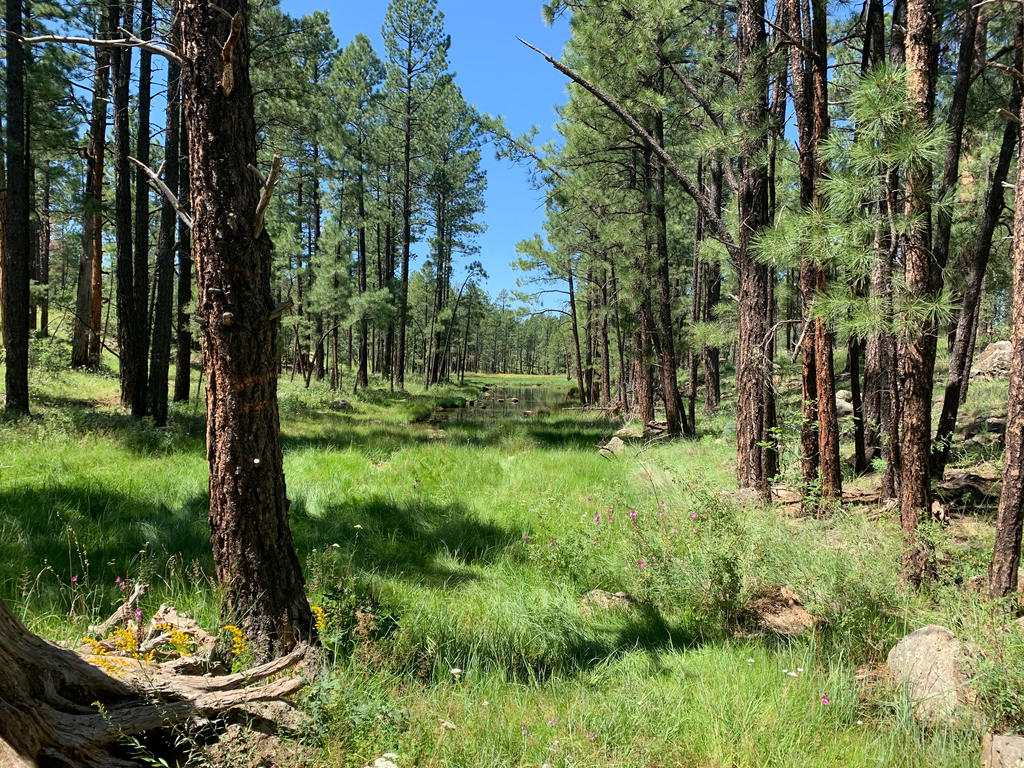 97blackbird
Sadly, the pics of the meadows full of wildflowers are underwhelming. The flowers are small get lost in green or just appear like a color highlight. 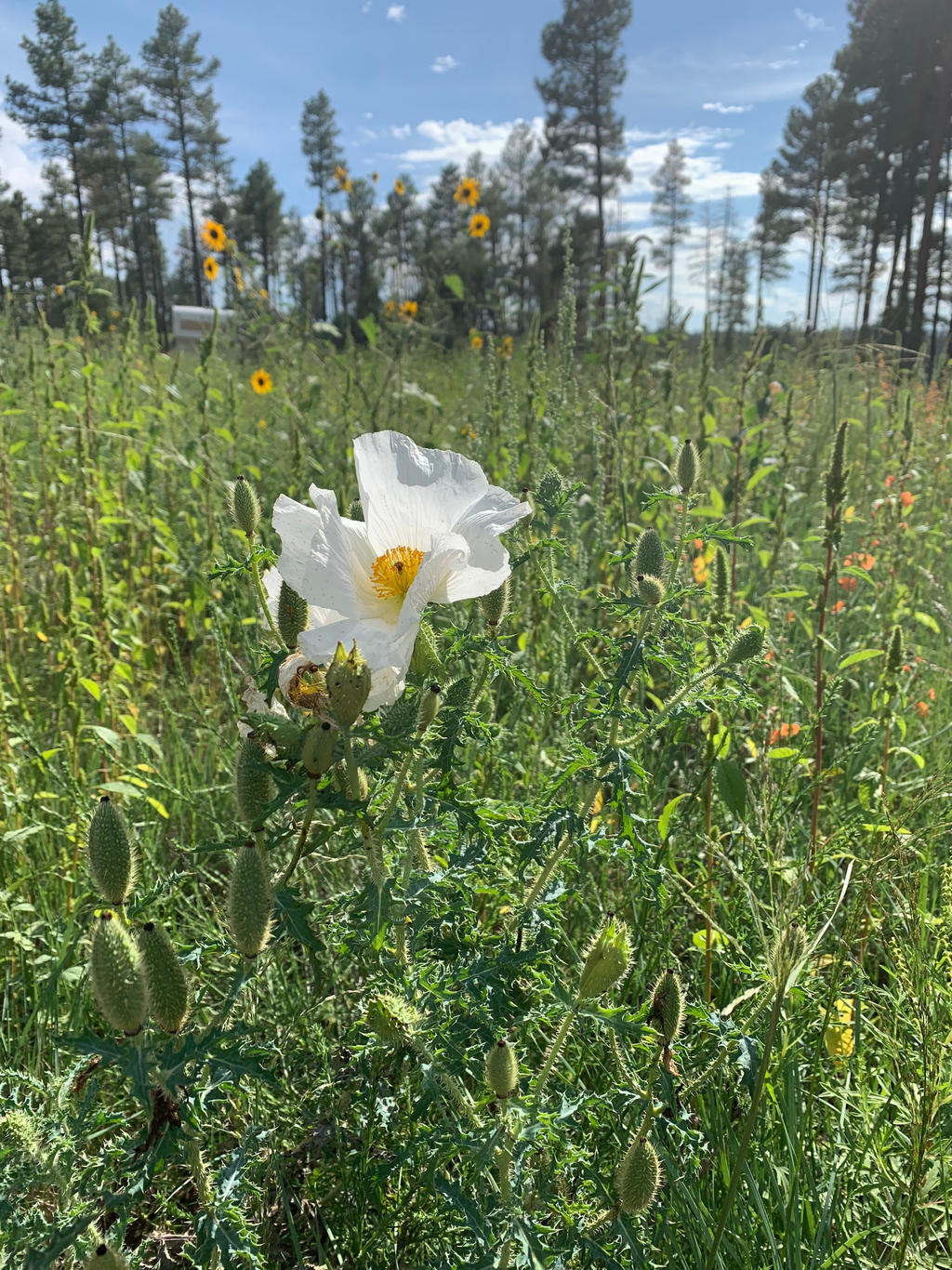 97blackbird
There were lots of great trails. Cool summer weather. Spent time with family.
It was a great trip!
Posted 9 months ago Report
Link Quote Reply

97blackbird
So Monday night my car broke down,(timing belt) but it happened right across the street from a 24 hour truck stop with comfortable seating, choices of food, and WiFi for my computer, where I proceeded to play games guilt-free while I waited for morning. The nearest Auto-repair shop was within my AAA towing range too! As far as cars breaking down, this wasn’t too inconvenient.

Then Wednesday afternoon I had to crouch down to get under and through my locked driveway gate because I left my key in my car. Somehow in that awkward maneuvering I twisted and broke my right leg. Tib-Fib. Tibia is fractured badly enough to require a Orthopedic surgeon who’ll screw me. (The repair will likely require screws) But my neighbor was on site a minute later as we had planned on him taking me to get my car from the shop. So I didn’t linger long on my driveway or have to endure the painful crawl for 500 feet back up the gravel drive to my house. Just had a change of plans. As far place and times to break a leg, this wasn’t too inconvenient.

In light of the events of these past few days, I’m expecting Friday to be mauled by a pack of Typhus-infected Hyenas in front of several animal-control vans whose drivers are studying disease control and trauma care in university. As far as random wild-animal maulings and disease are concerned, this scenario doesn’t sound too inconvenient…

Remember in the middle of life’s inevitable tragedies to always look for the hidden blessings. For me, I believe that God is there.

Looking at my past. Oof
@97blackbird
Wow.
Ok.
I would ask if you’re ok, but obviously you’re not, broken leg and all. I’m sorry all that happened to you!

Go fsck yourself
@97blackbird
Damn, man! That really sucks, to say the least, though you’re right: it could’ve all gone much worse. Hell, at least you didn’t get mugged, eh? To quote Monty Python, “could be worse, could’ve been stabbed.” This past week must’ve been written in the stars to be totally f@$ked up. Yours is probably the tenth story I’ve heard where it’s been nothing but a chain of shit going wrong. Obviously you survived, which is always a bonus. I just hope your recovery goes quickly and well.

A tip for finding a GOOD orthopedic surgeon: ask around, figure out who the BAD ones are first; use sources like people at physical therapy, or RNs that work at outpatient surgery facilities (sometimes they can even suggest good ones, too). This was all learned through experience, by the way. I’ve had a knee and shoulder worked on, thanks to being a runner and diabetes, along with several close friends who’ve needed ortho surgeries, plus my Mom being an RN. :3

Lovely pictures from ~10 days ago, above, BTW. Thanks much for sharing! 😊

I’ve been quite busy myself over the past three weeks, moving out of the apartment I’ve called home for ~14.5 years. I also have a new place to call home, but the move-in date is the 17th of this month, so I get a week to recover, while my stuff sits in three separate storage units. TBH, I’m kind of surprised I didn’t end up hospitalized again, having spent so much time awake during this move-out. The real bitch was that I spent July and the first half of August dealing with sciatica – basically, really painful muscle spasms in my lower back – that was so severe, I couldn’t even get out of bed around the last week of July. So even though I knew I had to move out, there wasn’t a damn thing I could do about it until my back healed itself, and OMFG was that frustrating.

The sciatica is mostly better now (some days it’ll spasm, if I lift something heavy), the move-out is complete, and I’m only stuck at my parents’ place for another week. I plan to do absolutely nothing but be as lazy as possible during that time, to keep my stress level low. My mind & body are screaming out “I need time to heal,” and I’m granting their wishes, so I don’t end up a broken, wretched pile of goo.

If there is a God, she’s a crappy engineer, and should stick to artsy stuff. LoL
Posted 9 months ago Report
Link Quote Reply

97blackbird
@BigBuggyBastage
I pray that you heal quickly, and completely.
I’m glad you have your move out completed. It would be terrible to be in your current physical condition but be only half-moved. My dad has dealt with sciatica, I know how painful and disabling that can be.
Fortunately, I know a good surgeon. He put my shoulder back together. I have every confidence that he’ll do a great job with my leg.
Posted 9 months ago Report
Link Quote Reply

97blackbird
Had surgery yesterday. Nerve block is still doing it’s job, so I have a numb leg.
Foot is now in a hard fiberglass cast. I understand that the surgery went well, but long; they had to remove a couple bone chips. My next appointment is in two weeks.
Posted 9 months ago Report
Link Quote Reply

Looking at my past. Oof
@97blackbird
Oh no! I hope it heals well.
Posted 9 months ago Report
Link Quote Reply

Go fsck yourself
I’m writing this between “sleep phases,” because a low blood sugar awoke me, I ate WAY too much to compensate, and I’m just waiting for the blood sugar to stabilize – so please forgive my randomness. 🤪

@97blackbird
Sounds painful, or at least it would be without that nerve block, I’m sure. But hey, if all went as planned, that’s great news! :D Are you at least able to move around on crutches?

I’ve completely finished dealing with the OLD apartment, the paperwork side anyway, and my back is on the mend, thank Lord Ganesh – I still experience very occasional spasming, though it’s now in areas of my back OTHER than where the sciatica was the primary cause. So, uh…yay? It might be showing my Midwestern roots, but I was thrilled to learn I only had to pay $14 to cover all “damages” to the old place, which the landlord said was “left in excellent shape”. Oh brother, if only they knew how much work I’ve done over the years to keep that place from completely falling apart. I even considered sending them a bill for my work at one point (probably when it felt like my arms were gonna fall off from having to sand so much plaster patch), but thought it better to simply pay up, and close that entire chapter of my life.

I’m still ‘recharging my batteries’ from the move-out, and it seems the universe is reinforcing the fact that I need a real break: the weather has been rainy, and will be through Friday, so there’s little chance I’d be able to move anything from storage to the new place – an open-bed pickup truck is all I have for transportation at the moment.

Ah yes, the new place! Very nice. A lovely view to the North, and my own washer and dryer. 🥰

The only thing I found less than optimal was that the vinyl floor is a bit dirty in the kitchen & laundry area, but it’s nothing a mop can’t handle, and I’m sure as heck not going to bother management about it. I’m thinking about washing the carpeting as well, just to be certain everything’s clean before I move stuff into the place – yes, I own a carpet washing machine, and a carpet rake. I’m that much of a clean-freak. Also, I’m just rambling at this point. LoL Honestly, I just hope I can get reenergized enough to do everything needed to actually get myself living in this place I’ve been wanting to call home for nearly 10 years.

With that in mind, I think I’ll pop a hydroxyzine, and crash.
Hard.
And long. 🍆😴👍
Posted 9 months ago Report
Link Quote Reply

Looking at my past. Oof
@BigBuggyBastage
I’m glad you’ve found a new home that is satisfactory!
Whats with the uh… whats with the eggplant emoji there
Posted 9 months ago Report
Link Quote Reply

Go fsck yourself
@Communist Starlight
I was hungry when I wrote that. 🤣
Posted 9 months ago Report
Link Quote Reply

Looking at my past. Oof
@BigBuggyBastage
Lol, hungry for what? ;)
Posted 9 months ago Report
Link Quote Reply