Applepie1973
Nostalgia Purist
One year had passed since Luna had returned at Nightmare Night. Applejack, Pinkie Pie, Twilight, Rainbow Dash and Spike was together in Raritys home while Rarity made Nightmare Night dresses for her friends. It were one of the last summer days while the sun was sinking behind the hills. Later that night was the ponies and Spike trying to sleep while they waited for that special night. The ponies was wearing the same dresses as last year while they all met in Raritys house. In the meanwhile was ponies busy with preparing for the festival. There was fruits and candy for sale everywhere, round balloons hanged all around while the band from Canterlot came up on the stage. Rarity was going to the yearly Nightmare Night in Canterlot in the meanwhile.

“I am going out and work with Applejack and Spike now so see you later tonight girls.” Twilight said to her friends in her Starswirl dress and beard.

So that night was Twilight working with Applejack and Spike at their carnival games. Some ponies was dressed up like ghosts, some like space travelling ponies and another like a shark. The Cutie Mark Crusaders they came also to the marketplace too that night. Luna came by in her chariot while the surprised crowd at the marketplace bowed for her.

“Hey Luna great to see you again.” Twilight said to Luna that came by at the farmer ponys carnival games.

“Nice to see you again too and I remember you Applejack from last year.” Luna said to Applejack.

“And now let the fun be doubled!” Luna shouted in her Canterlot voice

Later on was Applejack, Spike and Twilight going around at the marketplace to get candy. Applejack, Luna, Twilight and the baby dragon got some Nightmare Night balloons on a string. Applejack and her friends was going to the other carnival games too that night. The baby dragon and the farmer pony they both danced to the band on the stage too. The alicorn and her friends went to the park after the dance and there they met with Pinkie Pie, a crowd of fillies and Rainbow Dash on a cloud. Rainbow Dash had fun with scaring ponies by using her lightning. The party pony were dressed up as a chicken again and ran screaming ran away as usual by the sigt of Luna.

“Luna thats really you again and I thought you would show up tonight.” The pegasus pony on her cloud said to the alicorn.

The pegasus pony and her friends they walked around the park for a while under the moonlight. There was a view over the distant mountains and hills from that park. Nopony else was out in the quiet park at that time where the statute of Nightmare Moon was standing. Then the pegasus pony told a long story about how she and her friends went out at Nightmare Night for the first time as fillies. Applejack, Rainbow Dash and Fluttershy was like The Cutie Mark Crusaders at that time. At that Nightmare Night was they teaming up with filly Pinkie Pie. After the story was Rainbow Dash and her friends returning to the crowded marketplace. The farmer pony and her friends was at the marketplace until the farmer pony went to Fluttershy’s house where she spend the remains of the night. Applejack and Fluttershy went to bed while the crowd at the marketplace was at the festival until the early morning light.
Posted 7 months ago Report
Link Quote Reply

Applepie1973
Nostalgia Purist
“This has to be the last time I am visiting Dweebville.” Gilda told herself.

It was a sunny afternoon, as many guests including Berry Punch and Minty were arriving at the party in Ponyville for Gilda that had left after being pranked out of her party. There was cakes, games like pin the tail on the pony, blindfold games and more.

“And also a cheer for our new citizen Minty.” the pink pony told the cheering crowd.

It was a month after the prank party for Gilda. Nopony had seen Gilda after she had left the party after she had been pranked by both Rainbow Dash and Pinkie Pie. Rainbow Dash relaxed by a lake by Ponyville one sunny summer day in August. The pegasus pony and her friends had nothing special to do. Rainbow Dash laid on a beach chair by the lake and read a Daring Do comic. But soon had Rainbow Dash heard a thing run fast by her.

“That could only be Pinkie Pie or some fast animal.” Rainbow Dash told herself.

The pony thought she heard a pony shout in the quiet woods. Somepony were shouting for help. Rainbow Dash flew into the woods. There had Rainbow Dash been startled. A ghostly mare searched for her filly in the sunny woods.

“I am searching for my filly I had seen last time here one summer evening in the woods.” the ghostly mare told Rainbow Dash.

“But I haven’t seen any filly here.” Rainbow Dash told the entity.

Rainbow Dash had not seen any ghosts as long as she been here as a filly on vacation. Soon had the entity went away. Rainbow Dash flew quickly back to the lake. But there had a another ghostly entity that looked like the living corpse of a filly suddenly been coming up from the water. That must had been the filly the other entity searched after. Rainbow Dash left that area quickly. Later that day had Rainbow Dash found Granny Smith in the Ponyville market. The old mare knew much about Ponyville and the area’s history. Rainbow

Dash told what she had seen at the lake.

“I seen these entities too by that lake.” Granny Smith told Rainbow Dash.

Granny Smith told the pegasus that for many years ago a mare and her son went into the Ponyville woods to bath one summer evening. None from Ponyville could find these two the next morning. A group of pegasus ponies from Cloudsdale who searched for the two lost ponies only found their ghostly remains instead in the dark forest they fled from. 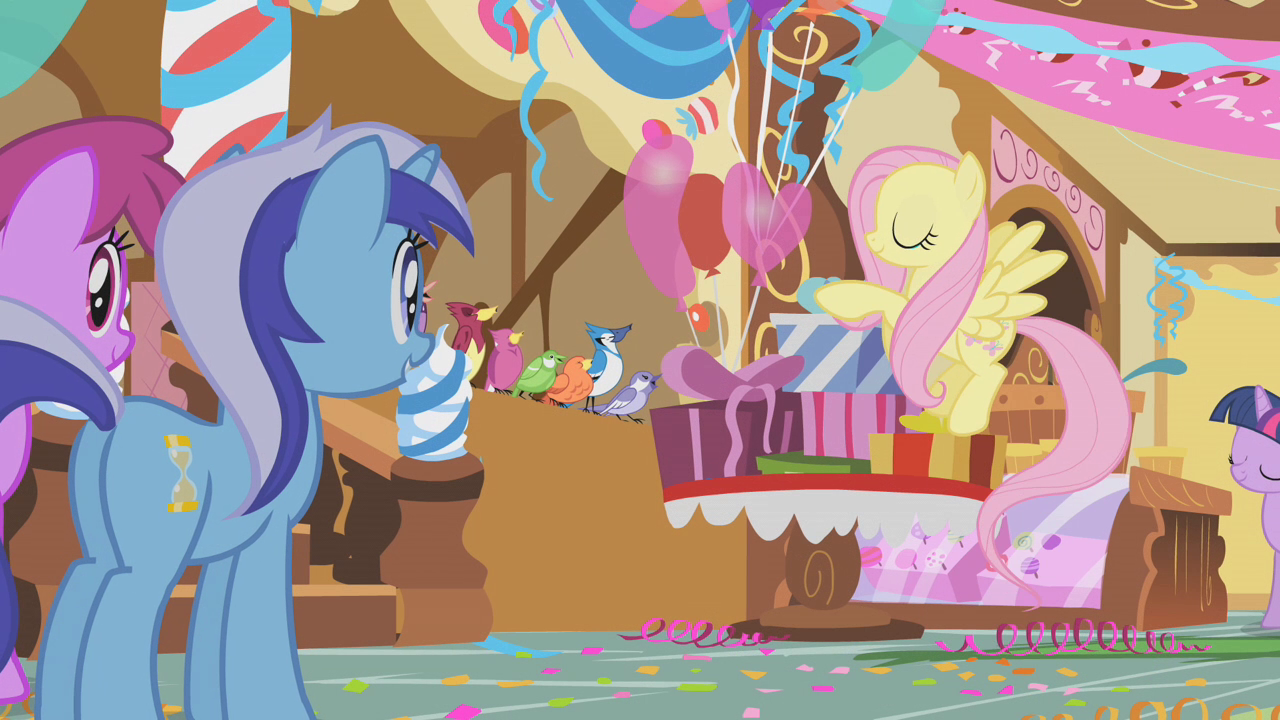 Applepie1973
Nostalgia Purist
The annual Sistershooves Social was held again in Sweet Apple Acres in the autumn. The last time Big Mac dressed up in drag as Orchard Blossom and Apple Bloom had been disqualified from the Sisterhooves Social. One of the three Sisterhooves Social judges had been missing too that evening after the event, as they went home at midnight through a nearby forest. The judge that returned to Ponyville the next day told Big Mac, Rainbow Dash and Applejack that the other two judges was chased away by a growling thing in the dark forest. That next morning Applejack, Big Mac, Granny Smith and Rainbow Dash went to the forest where the two judges had been missing. The four ponies could not find the missing judge that morning, but a part of the forest had bad smells of rotten flesh. As the four ponies they returned to Sweet Apple Acres had they been finding an over 100 moon old book in the barn about a torn down courthouse by the haunted forest. Three judges from the now torn down courthouse had been killed by the guilty filly of a 1000 year old swamp witch. Since then the forest had been haunted for years by the two swamp witches, and the three old judges.
Posted 6 months ago Report
Link Quote Reply

Applepie1973
Nostalgia Purist
Some ponies behind the hills where Applejack lived were missing, as they entered a forest where the witch Hydia was told to come back.

So Applejack and her friends they took to the forest, as Spike he had taken a cam with him.

At first they asked the ponies in Ponyville about Hydia, who still should be alive.

“It’s just a legend! did some say.

“Don’t go in there!” was another pony saying.

But the ponies was going to the forest, as it was a quiet and sunny summer evening in august.

No one was in sight, as they entered the forest.

It was like somebody shouted from afar, as the ponies wandered deeper into the forest.

“Is there anypony here?” was Spike shouting.

“I take a look from up here!” did Rainbow Dash say.

But none replied, as they later in found out that Rainbow Dash had not returned.
To be continued.

Applepie1973
Nostalgia Purist
Mathilda had her Birthday party on the evening that Rainbow Dash got a prankin a barn that last weekend in August, as the barn was decorated with bunch of shiny and clear round balloons. There in the barn that evening was the crowd of ponies and the donkey grabbing a creaking, round, shiny golden balloon with their hooves for over three hours. The party then went on at midnight with Nightmare Night stories, games and activities. Later that night was horny Sweetie Belle with a solid horn feeling how Pinkie Pie held a red squeaking balloon she brushed against the horn and static hair on the filly until the morning. One moon later had Twilight been finding out that an abandoned building laid in a small village by a forest across the barn. Twilight found an old book somewhere in her hidden part of the library with rare books. That book told about the abandoned
house where a filly and her family suddenly left the house that stood empty, and it was filled with old dolls and toys.

“For moons ago a family they lived in a house in a small village.” Twilight read.

“But then one day the filly in the family disappeared in the forest by the house, and was not seen again until many think they saw the ghost of her in that forest.” the alicorn read.

So that morning was the Mane Six, Spike and the CMC going to explore that abandoned house, as the thunder, lightning and rain began. While the ponies waited for the shower to be over, where they finding a lot of old toys like a Smarty Pants that Twilight also had as a filly.

Applepie1973
Nostalgia Purist
It was the morning after The Canterlot Friendship Festival in October moons ago as Granny Smith was a young pony. Granny Smith and some timberwolves grabbed a squeaking, red, big, very shiny, very clear balloon animal from the morning until the afternoon in the Everfree Forest as the pony got some balloon animals at the Frienship Festival. The pony was catching the balloon animal with her hooves as the timberwolves with hard twigs was catching the balloon with their paws. After that had the pony then been petting a timberwolf with a squeaking, yellow, big, very shiny, very clear balloon animal as the pony rubbed her other hoof between her legs from the afternoon until the early evening non stop. The twig dog felt relaxed by having young Granny Smith rub the soft balloon skin against his hardened twigs for loads of hours. 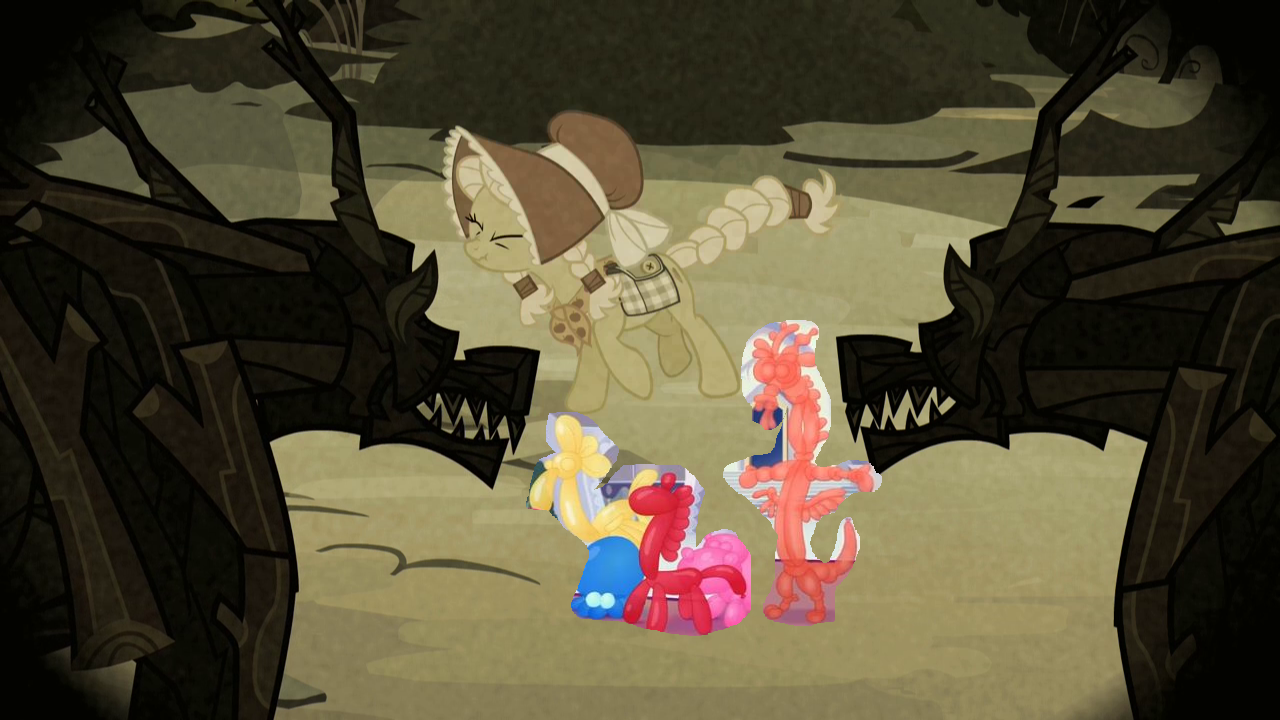