I Just Don't Have The Hearth NSFW

Autumn ended, and Christmas was on the way. Rarity she moved to Canterlot where she lived together with Prince Blueblood.

The ponies they held a farewell party for Rarity one evening, as both DJ Pon3 and Lyra played music. Rarity she held a speech for her friends, as midnight fell over Ponyville.

“I found my prince, but I always return if you need me!” Rarity she said to her friends under here speech.

The Christmas days passed, and Rarity she returned to help her friends if there was wildlife to fight or ponies in need. Then one day were Spike burping up a letter from the princess, and The Mane Six was invited to take part of a play.

“Interesting! We are going to star in an outdoor play about the history of Equestria the day before Hearth’s Warming Eve next week!” Twilight said to her friends.

“And I made the costumes for you!” Rarity said to her friends.

The Mane Six got instructions about the play, as the Canterlot ponies was decorating the outdoor stage.

“I know how you feel! You should see me before I entered my first rodeo as filly!” Applejack she said to the shaking Rainbow Dash.

Later was the two ponies falling asleep, as snow covered Ponyville that night. In the meanwhile, was Pinkie Pie busy with delivering presents to everypony in Ponyville.

Then the next day came, and everypony gathered in Canterot.

There was food and flags and on everywhere at the market. In the meanwhile was Soarin friends building the stage , and the ponies waited for the biggest show in the history of Equestria.

Later that evening, was a huge firework opening the show, as The Mane Six entererd the stage while the crowd cheered.
Posted 2 years ago Report
Edited 2 years ago
Link Quote Reply

The show began, and the curtain opened. Zecora she created the visual effects for the show, as DJ Pon3 made the music.

“This is how Equestria was founded, and everypony was created!” Twilight told the audience while visual effects showed the creation.

Then the Unicorns, Pegasi and Earth had each of their song with the orchestra in the background.

“But for thousands of years ago Discord he showed up and disturbed the harmony, and Princess Celestia she was fighting Discord back!” Twilight said.

A visual fight between the princess and Discord was shown, as the audience they cheered. Ligths, magic and fireworks illuminated the stage.

As the play ended with the Cutie Mark Crusaders song about Equestria, was the crowd giving them a long applause.

While The Mane Six went to bed after the play, was Twilight thinking back to Rarity’s speech.

“Good eveing! Nice to see you all gathered here!” Rarity said to her friends.

“As you know I decided to try and live in Canterlot for the remains of the year!” Rarity said.

Rarity she had that plan since they saved Equestria as superheroes, but not everypony was happy while Appleck and her family was not a good friend with Upper Crust and Jet Set.

“There are some friends here I knew since I was a filly, and it includes Rainbow Dash and Applejack!” Rarity said.

Both Applejack and Rainbow Dash was about to cry, as Rarity said that.

“But I’m no longer far away than Canterlot, and you know that you can count on the big and strong Big Mac if you need help!” Rarity said.

The ponies laughed, as Big Mac gave his trademark word.

“Thanks! I hope I see you again soon in Canterlot!” Rarity said as the ponies gave a cheer.

Discord was haunting Twilight in her nightmare again after her Birthday party, as Twilight she felt how her cutie mark felt like it burned. So Twilight she woke up in the morning, and found herself in the mess after greedy Spke had stolen from The Mane Six while they was sleeping. Raritty she came by to visit Twilight that day, as she showed her the fire ruby.

“I was buying this in a store here in Ponyville, but that fire ruby was told to come from another place!” Rarity said to Twilight.

“That fire ruby comes from where Princess Celestia’s bird lived, and she knows somepony over there who are planning the wedding of the decade!” Twilight told Rarity while they studied the globe.

“Anything more about that place?” Rarity asked Twilight.

“I heard we are invited over there to a royal wedding, and meet four main characters!” Twilight told Rarity.

Then was Twilight showing Rarity books about Princess Cadence, and her stories.

“By the way how is Applejack doing after all this that happned to Ponyvlle?” Rarity asked Twilight.

“Having trouble with sleeping, and having a hard time to decide if she is in love with Spike or not!” Twilight told Rarity.

While Rarity later was on the way through Ponyville to talk with Applejack, was she watching how huge Spike had marked Ponyville with his feet. As Rarity came to Sweet Apple Acres, was they taking a walk through the sunny forest where Spike had taken the apples and leaves.

“How is Ponyville going to handle Spike after his rampage?” Applejack asked Rarity.

“No worry about that! Twilight will talk about that with the princess today!” Rarity said to Applejack.

Applejack needed to talk with Princess Celestia about Spike’s past, so she went for a visit later that sunny summer evening.

Later that evening, was Applejack visiting Princess Celestia, as Applejack needed to know more about Spike.

“I raised Spike, and he came from the village where also Princess Cadenece and my phoenix comes from!” the princess told Applejack in her library.

“Years before I knew Twilight, was I given an egg where Spike was inside so I knew him since that very beginning!” Princess Celestia told Applejack.

Princess Celestia told more tales about Spike, until Applejack went home at midnight. Some months later after that summer where Spike had made terror in Ponyville, was Hearth Waming Eve coming around. The Hearth Warming Eve vacation it ended with a celebration for the new year, and it was held in Canterlot.

“Dear Mane Six! You are all invited to the end of year party in Canterlot for the first time!” Twilight she read to her friends in her library the day before the party.

“You will also get the honor to decorate Canterlot with me, and get the VIP room!” Twilight she read.

So early the next morning, was The Mane Six in their dresses taking the train up to Canterlot. Rows of ponies waited to get inside the castle under the brunch, and as The Mane Six went into Canterlot where they greeted by Princess Celestia.

“Good morning Mane Six! I hope you all slept well because we have a long night before us!” the princess said to The Mane Six.

After the brunch, was Princess Celestia, Pinkie Pie and Applejack decorarting Canterlot. In the meanwhile, did the other ponies help with the tables, chairs and drinks. The hours passed, and evening fell while thousands of ponies arrived at the gala.

“Hey Zecora! Nice to see you again after you helped my sister over with The Cuitie Pox!” Applejack said to Zecora that also came by.

The evening went on with dancing to the Canterlot orchestra, and at midnight was everypony cheering while they sang At the Gala. Both Applejack and Fluttershy they needed to come away from the crowd, so they went down and visited relatives of the many animals that Fluttershy had. The gala ended early in the morning, as The Mane Six took the train back to Ponyville.

Applepie2010
Nostalgia Nerd
It was Hearth’s Warming Eve once again, and it came earlier and earlier that first Weekend in November. The Mane Six had returned to Canterlot with a possessed Holly doll they locked into the room with dangerous items in Canterlot’s basement that included love poisons and Smarty Pants dolls. Applejack broke her leg under the fight with the demon so one of her backlegs was in wraps. The many Hearth’s warming festivals in Canterlot and Manehattan began the first Weekend in November and the six ponies and Spike that was in a fancy and Hearth’s Warming decorated suite all grabbed a large, creaking, pink, shiny Christmas balloon they got at the Canterlot Hearth’s Warming festival from noon until the afternoon as they waited for the annual royal Canterlot fireworks at midnight. Then was Pinkie Pie brushing the large, creaking, pink, shiny Christmas balloon against Applejack’s static hair as Applejack rubbed herself under her legs until the evening. That evening later on was Rarity and Spike both fine dressed up as VIP guests going to one of the many festivities in one the castle wings. Spike was brushing a large, creaking, pink, shiny Christmas balloon against the tip on Rarity’s hot hard horn static hair as the pony rubbed herself under her legs until midnight where the fireworks began. After that was fine dressed Rarity and Spike about to enter a ballroom where there was a VIP party hosted by some rich ponies from Manehattan until the morning, but the guards was missing. 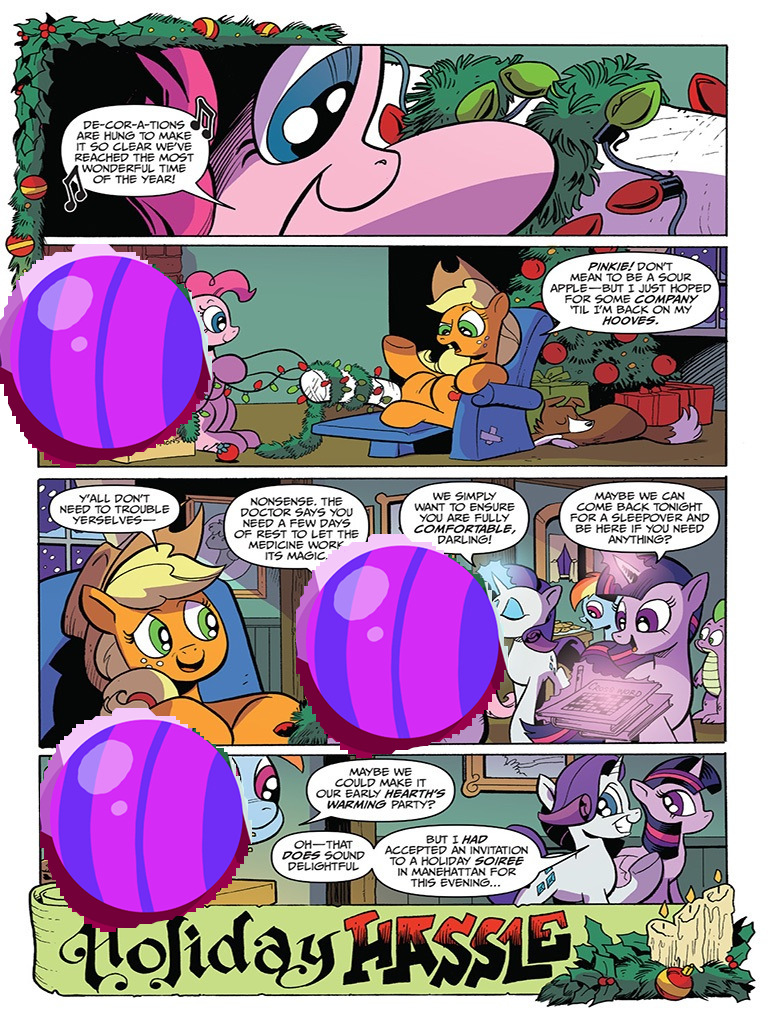 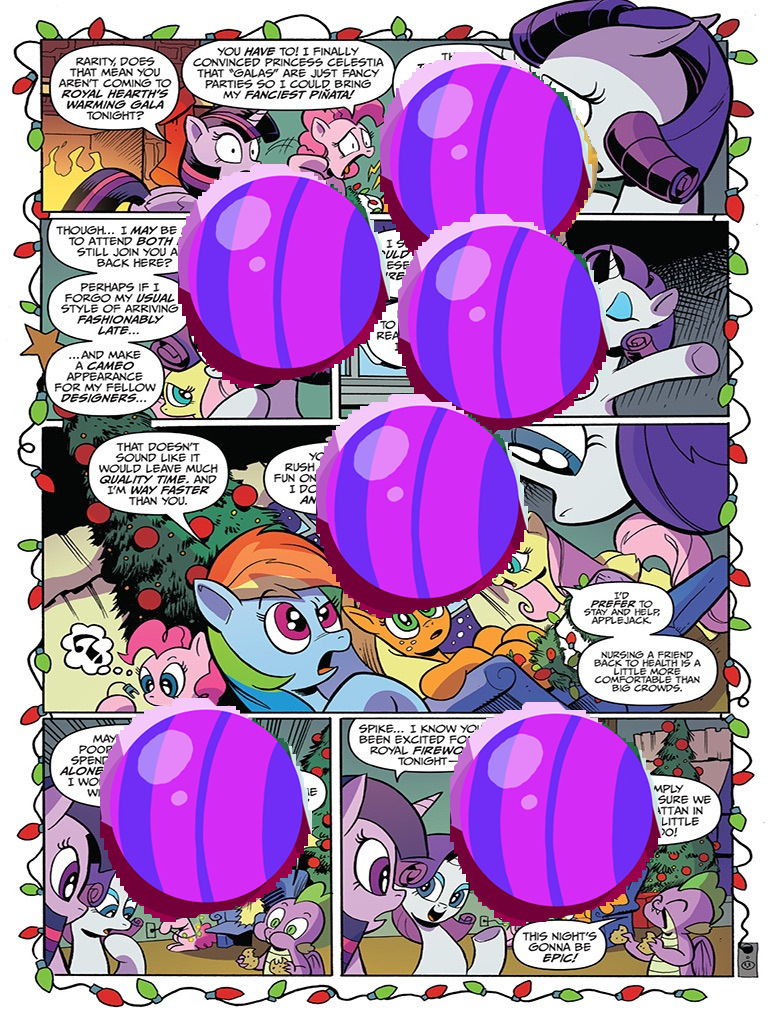 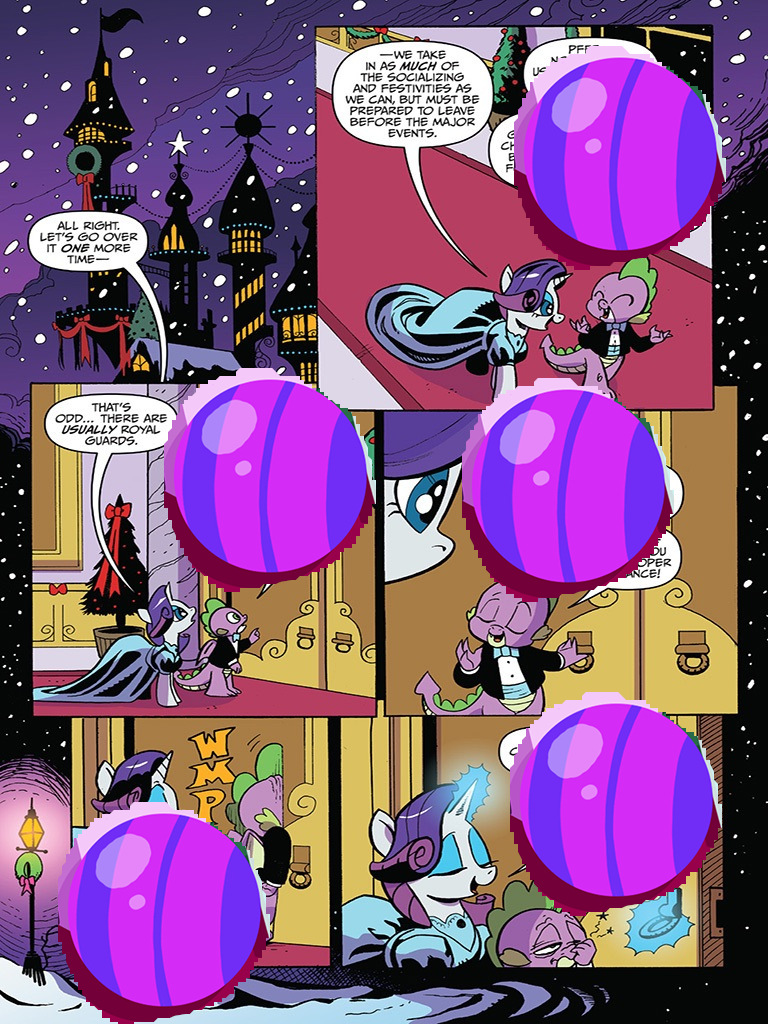