Witch Dagger!
@Zeb
Actually, in terms of that, she's actually more commonly known as Alula, as I've seen that used more often than Pluto. Though, I do agree with Princess Erroria implying Alula.

For Chip Mint, it's a fanon name like Rain Catcher.

White Lightning is the canon name for Lightning Bolt, though I do think Lightning Bolt is still used for her.
Posted 4 years ago Report
Link Quote Reply

Spinister
@Zeb
I'm not entirely sure, but I think Alula (pegasus Erroria) might have been depicted as all four main pony races.
Posted 4 years ago Report
Link Quote Reply

Tag-Bot
Huh, didn't even know Alula was one of the names. Well dang, pony's got 3 of 'em~

Given that, And the likely hood "pluto" was just given to her cuz of her Nightmare night costume. I'm thinking of makin Alula stay the character tag, remove character status from Princess erroria and Pluto. And then repurpose the "pluto" tag to be for the planet itself. Replacing the pluto (planet) tag.
Posted 4 years ago Report
Edited 4 years ago
Link Quote Reply

The Green Meanie
Weapon: Paddle
@LightningBolt
I'll just change your name to WhiteLightning and change the tag over.
Posted 4 years ago Report
Edited 4 years ago because: Guess how serious I am ;D
Link Quote Reply

Dogman15
I'm not famous.
This image is blocked by your current filter - click here to display it anyway

Also Blackthorn and Bramble
I think I might have spied some images in there that are not the canon characters. Not sure.

Adding on Gaffer and Praiser Pan 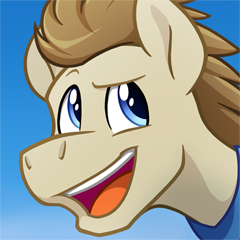 Fire Streak Fan Club
whitewash (brolly is his other tag here, do I need to make a separate request topic for a tag implication? media)
band pony (derivative fan-name, colored tag is thunderclap; ditto to above)
Posted 4 years ago Report
Edited 4 years ago
Link Quote Reply

Word Bug
I am an idiot, ignore.

@chainchomp2
As for the secondary tags: I'm thinking of Aliasing them into the current character tags. Will wait a bit to see if anyone thinks they shouldn't be aliased.

Dogman15
I'm not famous.
@chainchomp2
"Band Pony" comes from how he was voice-credited in "It Ain't Easy Being Breezies". The people who write this show's on-screen credits are weird and sometimes it seems like they don't care enough to check for mistakes or inconsistencies.
Posted 4 years ago Report
Link Quote Reply

Just to stir the pot a little I rediscovered the not-thunderlane tag for the same character, which is colored. Like the some blue guy tag on the level of "wat" I suppose.

Thunderclap/Band Pony/Not-Thunderlane has an "official-ish" name, but said name is aliased to cloudchaser. It probably would make sense to alias the three listed since the situation on his name doesn't appear it'll improve otherwise. (And maybe a note added to the current cloudchaser tag the same way sunburst refers to warm front.

In the case of brolly/whitewash, the latter is arguably "official" on the same level as white lightning, which is linked by implication (rather than alias) with its fan-name counterpart, while the former is the predating fan-name.
Posted 4 years ago Report
Link Quote Reply

Dogman15
I'm not famous.
@chainchomp2
I'd like to add a note which may be obvious to some: He was called "Band Pony" in the script or by the credits writer because of his headband.
Posted 4 years ago Report
Link Quote Reply

Fire Streak Fan Club
Working on the shooting star (pony) tag since the Wikia uses the name from the CCG card and the orion tag does not mention it. Most instances of the "shooting star" tag (as now it's used for the astronomical object; like I've said before, a note/description on the tag may be useful here) on orion-tagged images were removed without replacing them some time ago, otherwise, they're the same pony.

Since the orion tag is colored in, there's a separate tag for just the astronomical constellation.

Tentatively suggesting cappuccino (with compass star being the merch name) which was mixed somewhat with chocolate sun, especially since mochaccino is implication-linked with rare find. There aren't many entries in "cappuccino" despite some images referring to the beverage (or both) so if anything I'm just throwing it out there rather than actually requesting action.
Posted 4 years ago Report
Edited 4 years ago because: shooting star as an astronomical object a la crescent moon
Link Quote Reply

Was Graphite a fanon name initially?