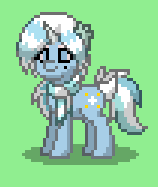 What Don't Kill Ya
('Ello. Just looking for someone who'd like to join me in a little-or not so little-adventure roleplay. Reply or PM if you'd like to join. Here's the prompt.)

(Takes place in an AU where Celestia became Daybreaker at the pilot episode and went psycho, Luna escaped the moon and became NMM, fought and defeated Daybreaker, and took over as Princess. This'll be important, trust me. Open RP.)

Canterlot was silent, quite a rarity nowadays. The streets were devoid of ponies, the streetlamps abuzz with energy, and the night sky shimmered overhead. You took in a deep breath of the night's fresh air, and continued on to the Canterlot Secret Archives. Princess Nightmare had opened a few wings of it to the public, and you were interested in a particular choice. The doors creaked as you entered, the librarian and guards giving you a passing glance. You headed to your favored wing, and reached for your dream title, and then…somepony fell over you, and you both toppled to the ground.
Posted 2 years ago Report
Link Quote Reply

Skaven
@Whirlguy
The mare, startled, looked about for her surprise assailant. Her eyes resting on the pony that had fallen upon her, she tries to stand while simultaneously trying to help the other mare stand. "Jeez, careful now- are you alright?"
Posted 2 years ago Report
Edited 2 years ago because: Shameful spelling error
Link Quote Reply

What Don't Kill Ya
The pony that had used her as a ladder slowly rose up from the ground, shakily putting herself back onto her hooves. She then lifted her head slightly, allowing Mayo to gaze into her cloak for a second before the mysterious mare looked away. A glimpse of a horn, purple eyes, navy blue hair… Then the mare's voice rose.

"Urm..thank you… S-sorry about running into you, I'm just…in a hurry…"

The unicorn mare shifts her eyes around anxiously, as if anticipating an attack. She wobbles on her hooves and avoids Mayo's eyes, as well as levitating the book she was holding out of view.

Skaven
@Whirlguy
"Don't worry about it. Just be careful- you could hurt yourself, or even one of these books. Can I help you with anything? You look like you need it."
Posted 2 years ago Report
Link Quote Reply

What Don't Kill Ya
At the mention of "help" and "need", the mare's eyes widened, and she shifted even more than before. She looked as if she wanted to leave quickly, but didn't want to seem rude or suspicious. She pawed at the ground lightly, and finally looked at Mayo properly.

"I guess, I could…Is the occult and ancient section open? I know where it is, and I've been to it before, but I'm not sure if it's available…"

Skaven
@Whirlguy
"I…don't know…I stay out of there at this time. I don't know what it is, but it looks like you're connecting me to something- I'm not going to hurt you, and I don't even know who you are, lady."
Posted 2 years ago Report
Link Quote Reply

What Don't Kill Ya
She gave Mayo a look not quite angry, not quite confused. It was almost…calculating? Whatever it was, it sent a chill down Mayo's spine.

"Oh, well…I didn't think you were going to hurt me anyway, I'm just a little antsy. You know, because of…" She glanced away, trying to think of an easy lie. "The cold. It's going into winter and all, and I'm…not…I'll just be…"

She moved to leave Mayo and the wing behind, getting ready to almost bolt out of the hall. One thing struck you about that comment…

It was the middle of summer.
Posted 2 years ago Report
Link Quote Reply

Skaven
@Whirlguy
She blocked her way. "You're not a very good liar. Just spill the beans."
Posted 2 years ago Report
Link Quote Reply

What Don't Kill Ya
She doesn't quite sound hostile, but she nearly hisses: "It's not something that anypony besides me needs to know. Besides if I told you, sh-" The mare freezes for a moment, glanes around her, then returns her eyes to you. "She'd know, and she would not be happy."

The mare then attempts to work her away around you without shoving or running past.
Posted 2 years ago Report
Edited 2 years ago
Link Quote Reply

Skaven
@Whirlguy
"Wait a second. If it is this important or dangerous, perhaps you could still use some help- even if I know nothing. Acting lone star is the best way to be unsuccessful." The mare seemed friendly enough, albeit firm enough to show she was not lacking basic intelligence.
Posted 2 years ago Report
Link Quote Reply

What Don't Kill Ya
The mare finally seemed to give enough to stop trying to squirm her way past, though she continued to fidget in place as if she were about to be attacked. She then gave a cold stare at- no, past Mayo. She seemed to be staring past her, into the dark library…

In a split second, she yanked Mayo down onto the ground, almost slamming her head on the wooden floor. She remained half hunched as… something whistled by, and crashed into the wall behind them. A loud crash sounded, and when Mayo looked behind her…the wall was completely annihilated. Obliterated, as if Princess Nightmare had unleashed the Moon's force on it.

Skaven
@Whirlguy
This was certainly probable cause to panic.
She moved to get up, consequently making the mare stand upright while pushing her to move out of that spot in case the caster decided to double tap.
"We should scram-" was all she could force out, her lips sealed as she was now focused on her surroundings and making a possible evasion.
Posted 2 years ago Report
Link Quote Reply

What Don't Kill Ya
The mare used her telekinesis to push Mayo back down, not allowing even a slight rise. She raised her head oh-so-slightly to scan the area, then immediately bolted down. "Absolutely not," she whispered. "That wasn't a Nightmare creation, but I recognize it nonetheless. If we move up, it'll see us instantly and vaporize us before we have a chance to blink. Do. Not. Get up."
She then turned directly to Mayo. "You're a thestral, right? Can you use sonar to figure out where it is now?"
Posted 2 years ago Report
Link Quote Reply
Background Pony #DAFE
@Whirlguy
I'm in
Posted 2 months ago Report
Link Quote Reply
Interested in advertising on Derpibooru? Click here for information!