Snips and Snails were hated? Jesus.

I mean, I don’t necessarily love these two characters, but they are completely secondary characters. There’s no reason to hate these two.
Posted 4 months ago Report
Link Quote Reply

@Sadrai
I heard they got some hate back in 2011, but not as hated as I’ve read here.
Posted 4 months ago Report
Link Quote Reply

If Snips and Snails created more problems that would affect the safety in Ponyville, I’d get it. But they didn’t. Apart from Boast Busters, I don’t remember any single bad thing they did.

Posted 4 months ago Report
Link Quote Reply
Sadrai
@Ring Team
Exactly this is what I been saying! People say they were also annoying an stupid but that never really bothered me because many cartoons have dumb characters plus they were usually minor in there appearances excluding the buckball episodes an boast busters. I would also understand if they were trouble makers who did bad stuff all the time but they only did one bad thing once in boast busters an they apologize for it yet it seems fans still hated them after that an never forgave them until the buckball episodes.
Posted 4 months ago Report
Link Quote Reply

Latecomer
@Sadrai
First impressions stick hard. Especially since they didn’t have another notable role for a while.
Posted 4 months ago Report
Link Quote Reply

For many years, what they ‘contributed’ to the show was the Ursa Minor mess and being Sunset’s bullying lapdogs in the first Equestria Girls movie. Plus cameos. Didn’t have any good side shown to make up for it before… season six?

Hate’s maybe a strong word. Maybe related to Trixie’s treatment. She’s kind of a darling to many in the fandom.

But even without hate, for a long time, I figure there was a “why do you even exist?” thing to them.

Never minded them. Actually nice to see there’s more to them than just being idiots, even if I never watched those episodes.
Posted 4 months ago Report
Link Quote Reply
Sadrai
@Latecomer

@Roseluck
Okay you both bring up good points, also another question if boast busters never happen but all there other appearances happen do u think the would still be disliked by the fandom?
Posted 4 months ago Report
Edited 4 months ago
Link Quote Reply

Brass Beau
Howdy from Shimmer Pope
@Sadrai
Considering the lack of male roles, if they were only ever shown being dumb boys then there would still be dislike. Maybe not to the extent they were given but a lot of people would have written them off as annoying I’m sure. Especially if they were still cronies in Equestria Girls.
Posted 4 months ago Report
Link Quote Reply
Sadrai
@Brass Beau
To be fair they were only cronies in that one film
Posted 4 months ago Report
Link Quote Reply

Brass Beau
Howdy from Shimmer Pope
@Sadrai
Yeah, but when it comes to any fandom, that would leave a bad impression of the characters. They didn’t get any positive characterization up to that point and wouldn’t for a couple more years. All anyone would know them for is being idiots and bullies. Which isn’t really to far off from how they were already presented. If Snips was shown to be too smart by half early on then things might be different though.
Posted 4 months ago Report
Link Quote Reply
Sadrai
@Brass Beau
True tbh I always thought Snips was the smarter of the top an the buckball episodes kind of prove it, with his money making ideas being really smart.
Posted 4 months ago Report
Link Quote Reply

So in Student Counsel we have Starlight who, despite considering Sunburst and Trixie her best friends, not only deliberately ignored Trixie, who had prepared a picnic just for her to spend the time together, but she also forgot a promise she made and continuously ignore her in the process of preparing a party instead of just making a schedule to avoid this type of problems.

Welp, there’s another reason to add to the list of why Starlight is not a good friend or even a good pony. I haven’t disliked her that much since Uncommon Bond.

EDIT: I also watched The Last Crusade. So… Scootaloo happens to have aunts and parents right now, I guess? I love the conflict of Scootaloo in this entire episode and I like the ending. But there are some details I’m not a fan of, like Apple Bloom’s ideas which kinda makes the episode slower than it should be. Also, the designs of Scootaloo’s parents are very generic, which is kinda odd considering how much I love Scootaloo. They look like a ponified fanart of Uncharted or something.

But still better than Student Counsel.

It’s almost like the moral of the episode was about making schedules or something. 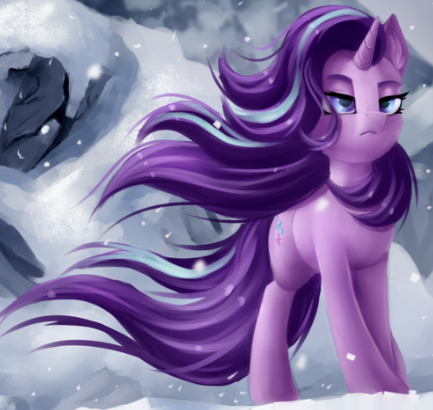 Star Seeker
Annoying fan has arrived
@Ring Team
You only ever seem to pay attention to the possible downsides of Starlight. Oh well.
Posted 4 months ago Report
Link Quote Reply

Also, the designs of Scootaloo’s parents are very generic, which is kinda odd considering how much I love Scootaloo. They look like a ponified fanart of Uncharted or something.

Because they’re supposed be based of Steve Irwin and Jane Goodall.

The Last Crusade was an episode that really soured on me the more I thought about it. Like, her parents are genuinely horrible parents and the fact that the show tries to not only ignore that bur act like they’re the greatest ponies ever(especially after basing them on real life heroes, one of which usually made time to be with his family) is pretty shitty. There’s also the fact that the episode ignores what was previously established in Parental Glidance where Scootaloo outright says that no one has ever been around for her, yet this episode comes in and they’re one big loving family. I was always against the “Scootaloo is an orphan” but this episode somehow made me wish that was canon instead

Also her aunts and her living situation. Like, can we talk how miserable of an experience that must have been? Did they really need to make an explanation for that? They really should have just “Shining Armor’d” them and just have them be taking care of her the whole time
Posted 4 months ago Report
Link Quote Reply

@Kiryu-Chan
I understand what you mean, but, even though I have zero problems with Scootaloo’s aunts and her parents, I think the fact that this was revealed in season 9 kinda says a lot about the inconsistency of Friendship is Magic. It’s basically “Scootaloo has now parents and aunts in the nineth and last season of the show”.

The episode is ok, mainly because of the conflict and the ending, but I wish it was less funny than it had to be.
Posted 4 months ago Report
Link Quote Reply

Latecomer
@Ring Team
I guess you and her are just not suited.


@Ring Team
It could be presumed she had some kind of family or guardians - the odd part is how little it turned out she has.

One part I don’t like is them making her a hybrid birth - I usually like mixed families (like in Common Ground), but here it feels like a subtle “explanation” for her flight problems, which is not a geat implication.
Posted 4 months ago Report
Link Quote Reply
Interested in advertising on Derpibooru? Click here for information!