It's not only her self-serving tendencies, is her overall attitude with basically everything and everyone in Ponyville that goes beyond season 7.

Starlight basically encouraged Twilight to reopen her new school that was shut down for valid reasons. 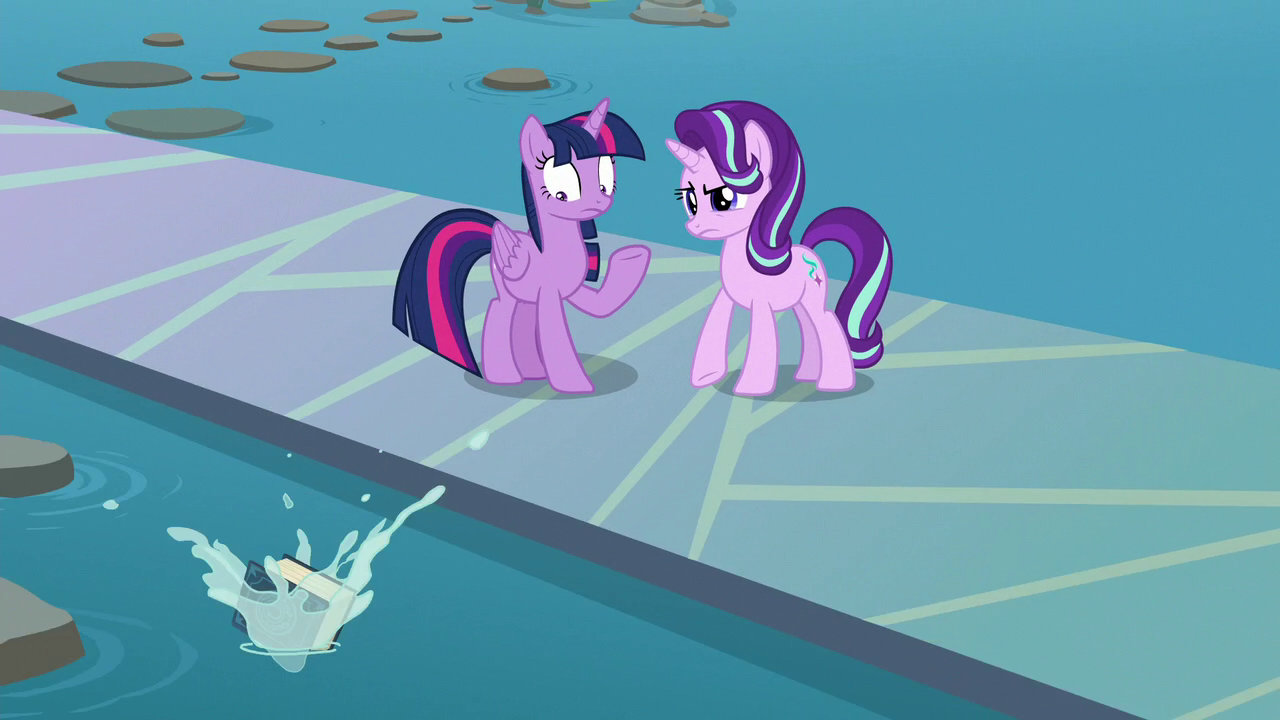 She told Twilight in a condescending way that she's not a princess-princess. 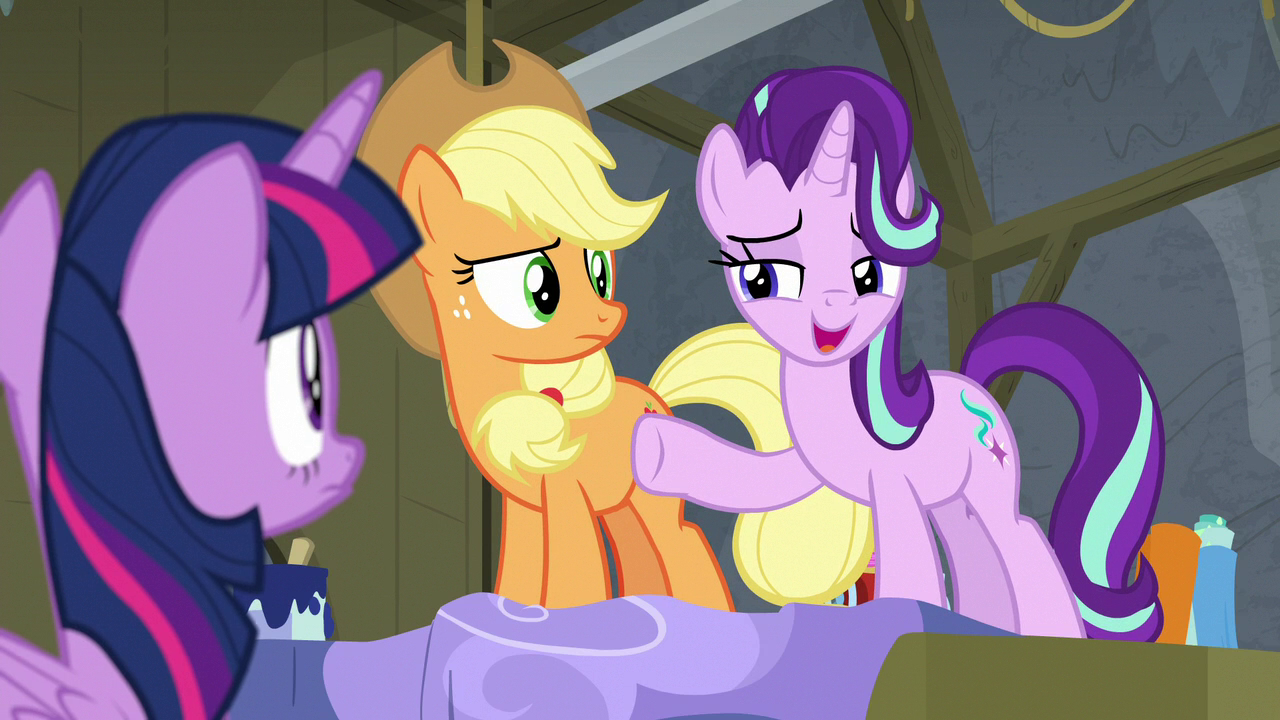 She blasted Discord to kingdom come for heckling her. 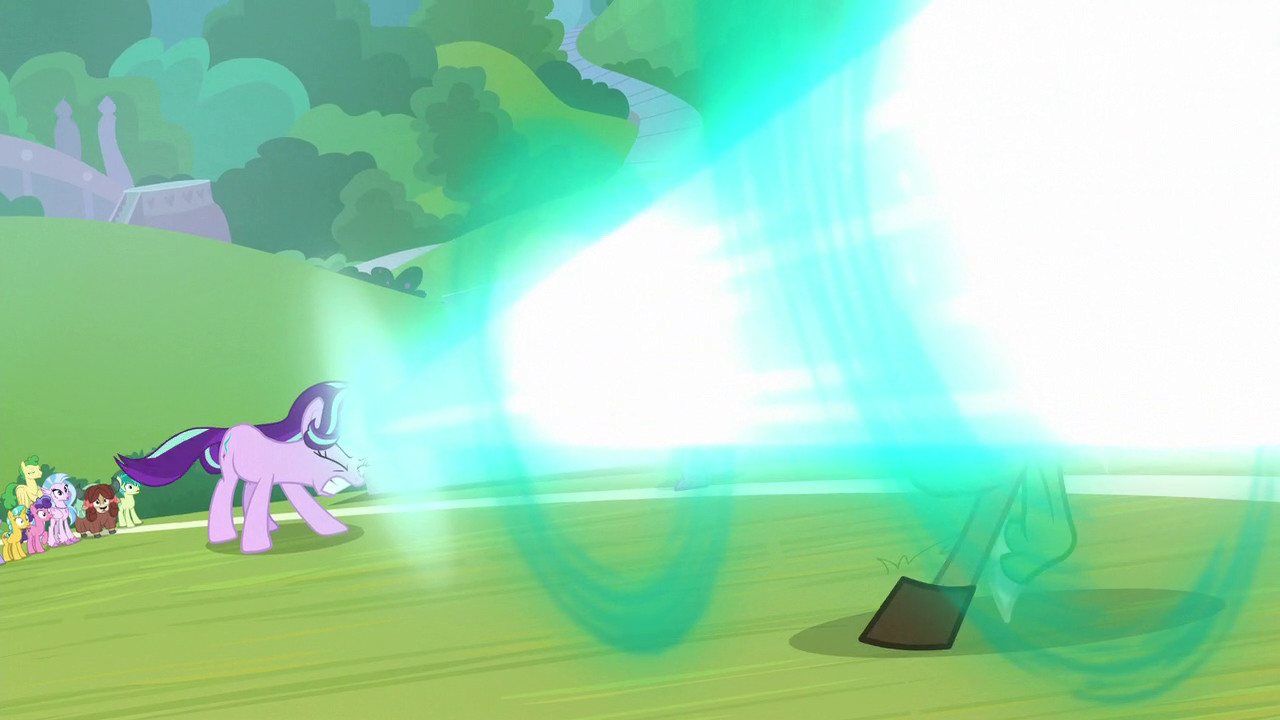 Despite considering Trixie one of her best friends, she traded away her home without her consent and gets angry at her for being upset about it. 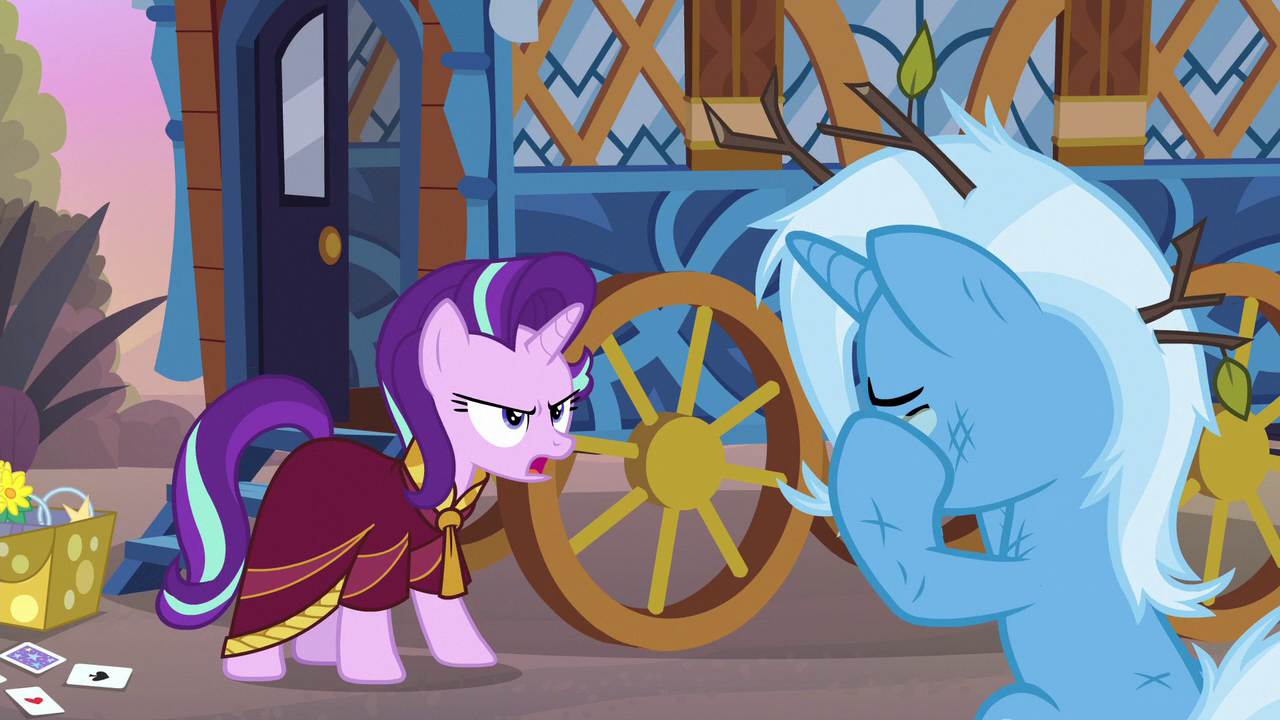 And speaking about Trixie, despite considering her and Sunburst her two best friends, she constantly ignored not only Trixie, but also her goal to properly prepare a party for Sunburst. 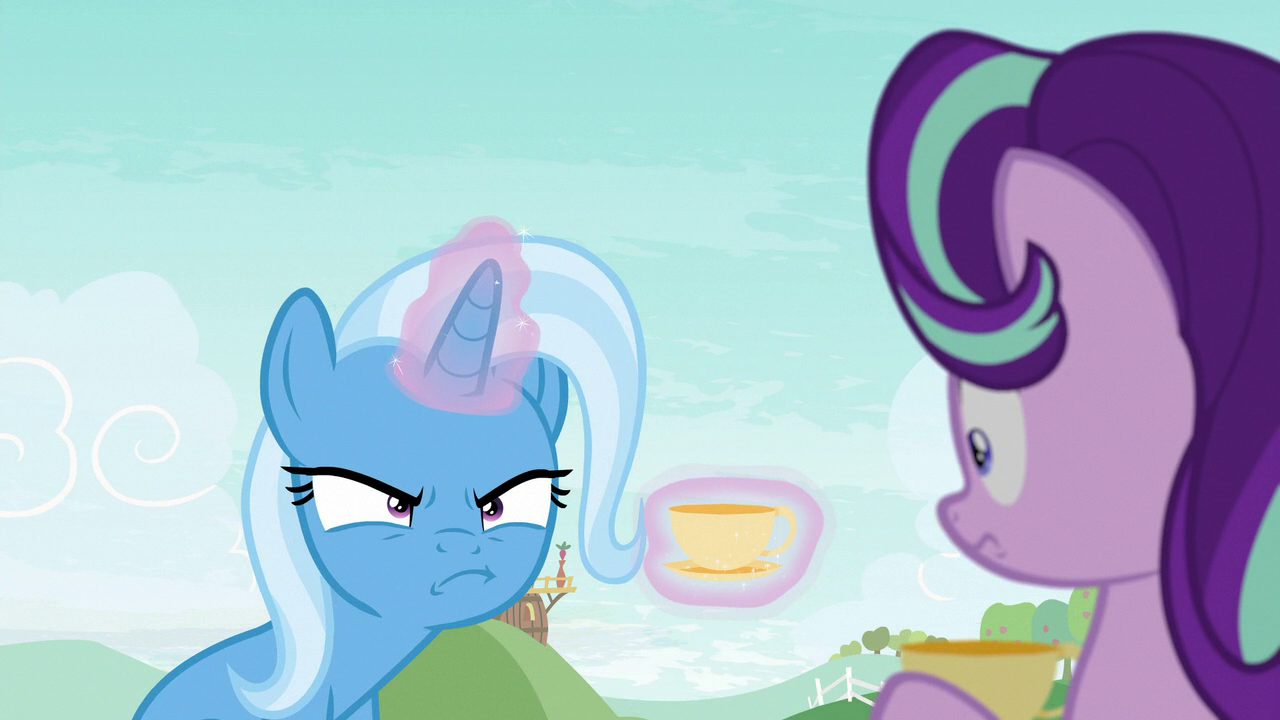 Starlight's character is fundamentally toxic and unchanged by the end of the show, because she wants to do whatever she wants and wants to avoid any kind of responsability. And that's a horrible thing to do.

Many people would point out this attitude if she was Cozy Glow or another villain, because antagonists tend to have this behavior in kids shows. In a show where she's supposed to be one of the main characters, she's horrible. She's at the same level as Superman from Man of Steel or Leonard from The Big Bang Theory: Someone who doesn't question her ultimate decisions.
Posted 3 months ago Report
Link Quote Reply

Fluff Appreciator
@Ring Team
Because the philosophy of the series shifted from morality and collective wellbeing to one's own will. It might not have been a conscious shift, mind you.
Posted 3 months ago Report
Link Quote Reply

I'm going to try not to mention motives for any of these. Just the actions themselves. These are also all Post-reformation for both of them.

. Tricked Cadance and Twilight into doing things for them and lured them into getting attacked by a Taltzwurm.
. Betrayed Equestria by siding with Tirek to help him drain the magic from ponykind.
. Invited the Smooze to the grand galloping gala and stood by while it ran amok.
. Tried to banish Tree Hugger to another dimension.
. Befriended Twilight's friends for the sole purpose of messing with Twilight's mind and making her jealous.
. Sucked Big Mac and Spike into a dangerous DND world where both of them could feel pain and harassed them.
. Tormented the students at the School of Friendship and fucked with Starlight.
. Brought back Sombra and let him mind control the entirety of Equestria.
. Tricked the mane 6 into thinking he'd been killed.
. Brought back 3 other villains and planned an attack on Equestria, leading to them almost killing the mane 6.

. Mind controlled the mane 6
. Infected 3 ponyvillians with her anger.
. Swapped the cutie marks of Celestia and Luna without their consent.
. Lured the dread Maulworth back to the Changedling hive.
. Turned Sunburst into a child without his express consent.
. Was a general bitch to Trixie.
. Sold Trixie's wagon against her wishes.
. Forgot about her commitments with Trixie.
. Indulged Trixie's incompetence for longer than she should have.

Posted 3 months ago Report
Link Quote Reply
Background Pony #6709
@Ring Team
With only blasting Discord and selling Trixie’s wagon as exceptions- well, just the latter, really; Starlight was in the right when blasting Discord, and you won’t convince me otherwise- everything else is just grasping at straws, especially the last one. So if someone has multiple activities competing for their attention, they’re the bad guy if the activity they prioritize is work, to the point that friends in the other activity have to pressure them to take a load off? I hope I’m not expected to find a simple-minded complaint like that persuasive.

Considering how many people I’ve seen go to bat for Cozy, as if she really did nothing wrong, that statement has virtually no credibility. You are literally the only person who’s explicitly made Starlight out to be the bad guy for prioritizing her guidance counselor duties.
Posted 3 months ago Report
Link Quote Reply
Background Pony #6709
@Dustcan
She got Phyllis.
Posted 3 months ago Report
Link Quote Reply

That's not a pet that's a plant.

It's below a pet but above a person.
Posted 3 months ago Report
Link Quote Reply

From what i've seen, more often than not, their main, when not only, line of defence for Cozy is her age. There'd be nowhere as many people defending her if she was Starlight's age, and nothing else changed about her.

He actually released 4 villains. People forget that he brought back Sombra as well.

The finale is what everyone talks about, but lest we forget that he also signed off on Sombra mind controlling untold numbers of Crystal ponies and Equestrians, and was willing to stand by in order to teach Twilight a lesson.

Like, with the finale, it wasn't his plan for the Villain Trio to run amok with Grogar's bell. With Beginning of the End, he was making the choice to tolerate Sombra doing whatever he wanted in that story. It's made very clear that he could've stopped him at any time, but he just didn't.

It's not the first time I said this, but Starlight reminds me of Marie Antoinette. Maybe too much.
Posted 3 months ago Report
Link Quote Reply

I can't see any similarities.

Posted 3 months ago Report
Link Quote Reply
Background Pony #2BCA
Enough about Starlight now. She's done. we'll most likely never see or hear from her again except in ancillary media like the comics. And even they have been using her exceedingly rarely.

Here's an unpopular opinion. Derpy hooves name is dumb and it'll never be used in media or in merch which limits her role and exposure. Woulda been smarter to Stick with Ditzy Doo. It nails her character and implies a relation to Daring Doo which coulda been a good story Hook.

Posted 3 months ago Report
Edited 3 months ago
Link Quote Reply
Background Pony #6744
I think the rule 34 content MLP is the core of the MLP experience for me. It's both what introduced me to the fandom in the first place and it's mainly what I remember among fan content.

I don't know if that says more about me or the culture of the fandom. Maybe both?

Latecomer
@Ring Team
Bear in mind that "a nice person to know" and "a fun person to watch on TV" aren't necessarily aligning categories. For instance, I'd put Princess Cadance above pretty much all the Manes in the first and below them all in the second.


@Mildgyth
I'd still argue against both sending her to Tartarus and stoning her. (Perhaps not quite as hard, though.)


@Background Pony #6744
Yeah, this is the bit that made me seriously wonder if the premiere was written already knowing the big twist or not…

@Ring Team
Well, Marie Antoinette was pretty much accused of things she didn't do. So I don't think that's a very fair comparision…
Posted 3 months ago Report
Link Quote Reply

@Latecomer
The only thing Marie Antoinette was innocent was the whole diamond necklace story, but other than that, she made too many mistakes to even deserve a second chance.
Posted 3 months ago Report
Link Quote Reply

Latecomer
@Ring Team
I'll have to research her again, but I don't recall her ever being particularly guilty. She certainly didn't start any cults, or end op getting off lightly, so I really can't see the Starlight comparison at all.
Posted 3 months ago Report
Link Quote Reply

From what i've seen, more often than not, their main, when not only, line of defence for Cozy is her age. There'd be nowhere as many people defending her if she was Starlight's age, and nothing else changed about her.

Not true! There's also the complete mystery of her home life which easily could have ended up explaining at least some of her actions, and it's definitely irritating how few people consider it to be something worth taking into consideration.

And, of course, there's the fact that she was so callously thrown in Tartarus with zero due process because she was written off as irredeemably evil, which is just preposterous. Not to mention how she clearly didn't belong there in the first place since she doesn't have the raw power to pose a threat to Equestria on her own, and those sorts of threats are exactly what Tartarus is intended to contain. And we can't forget how it was LITERALLY NO ONE'S job to feed, water, or even so much as check up on her, given that her and Tirek's escape went completely unnoticed for so long. Sending a damn child there was fucked up beyond belief.

Oh, and I have to say that Cozy being a child is still a valid defense for her because she still has a developing mind.
Posted 3 months ago Report
Edited 3 months ago
Link Quote Reply
Interested in advertising on Derpibooru? Click here for information!