@100SGX
Or an independent person or comoany make an sculture of Twilarina? (Like those high quality plushies the fans do)
Posted 3 years ago Report
Link Quote Reply
000
@SomeponyfromCHL95
That’ll work too.

And just imagine if it was a working Twilarina… She would talk and everything!

But the only thing we can do is wait or just dream about it.
Posted 3 years ago Report
Link Quote Reply

Twi’s Engineer Hubby
Twilight Sparkle is the Reason why I’m a brony for life. <3

Since it looks like it’s becoming a nostalgia feel trip in here. I’m going to put in my two bits. ;) I started watching My Little Pony Friendship is Magic when I found out about it as a sophomore college student studying late at night in the engineering lab. I found out about MLP:FIM through a friend I was working with finishing an assignment. Now both of us are anime nerds so he showed me some memes about the show and I was like, “Is this really My Little Pony now? Like I mean they look totally different then the ponies I know…” He said, “Dude they are totally different now.”. I replied, “Wow, they look really cute. You know me man I’m all about that moe shit.”. XD

After class he was like, “Yup, I knew you’d like it. This is like the very definition of cute girls doing cute things. Knew you’d freaking love it and their personalities dude damn. I didn’t show you one pony in particular she is purple and in the first episode” I told him, “Why did can’t you just show me?”. He replied, “You gonnnna love her, I don’t want to spoil the first episode.”.

I then said, “I’ll watch it in the dormitory tonight, with the room shut, lmao.” Long story short after the great exposition of the elements of harmony and upon seeing Twilight Sparkle move, talk, and display her personality. Celestia, the things I’d do to Twilight Sparkle. >:3 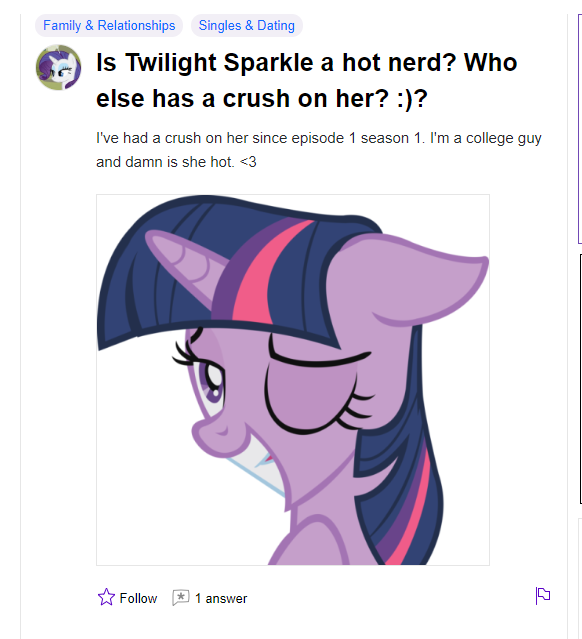 I'll rule the world
And now, ladies and gentlemen, a message from our favorite purplesmart, sharing her honest feelings with us, her devoted fans.

Twi’s Engineer Hubby
@Twi_Clown
Lmao. I poured my heart out only to get a “I hate you”. XD
Posted 3 years ago Report
Edited 3 years ago
Link Quote Reply

Twi’s Engineer Hubby
I wonder how Twi would react to a fan club about her. XD I would totally be Star Tracker. <3
Posted 3 years ago Report
Edited 3 years ago
Link Quote Reply

I would probably be a mix between fantroll and fanloud. I must admit I would be like Discord, except unlike Discord I would like Twi and no Flutters, and I would genuinely appreciate Twilight.

I must also admit I would be the guy who snarks at her instead of being the “you are always right Twilight” guy. Don’t get me wrong, in an odd way that’s how I show my appreciation. If I dislike or feel apathy to her, I probably would not talk to her at all.

Twi’s Engineer Hubby
@Twi_Clown
I get you. We all show our love for Twilight in our own special ways. :^) Like for me I would ___ then ____ and hug Twilight after. :3
Posted 3 years ago Report
Edited 3 years ago
Link Quote Reply

I'll rule the world
After noting that most of my faved funny pics about Twilight puts her in losing situations, I decided to make something different and I looked for comedic/random pics where Twilight either wins or is just not suffering.

Ꮖɦɛ Ꮖɛxǟռ.
This image is blocked by your current filter - click here to display it anyway

Hali the Emoji girl
❤ Moroha ❤
@Twi_Clown
#5 reminds me of Patrick’s dream from spongebob and #7 is so freaking cute!
Posted 3 years ago Report
Link Quote Reply

Mods-Matthew 23:25-27
This image is blocked by your current filter - click here to display it anyway

This thread should be renamed to the, “I worship Twilight Sparkle thread”.

Twi’s Engineer Hubby
I like posting Twilight Sparkle all over the internet. <3 Also other ponies in general. <3

I'll rule the world
Have you noticed the different postures we take when we post about our faved pony?

I'll rule the world
Your images are cute, adorable and sweet.

Mine despic Twilight either as a punk, a nutcase or a badass.

I like moe stuff. XD I always have the mane 6 either in cute or sexy shots. XD