yelling_into_the_void
The Hell?
I was going through my Favorited images, and these two are next to each other:

That's him, officer
@yelling_into_the_void
I can see why: They’re both adorable
Posted 5 months ago Report
Link Quote Reply

I would love to see a fanfic where Fluttershy is a hero like Superman.
Whose altruism will save ponykind.
And she would do the same things as Superman did in Kingdom Come or All-Star Superman.
Posted 5 months ago Report
Link Quote Reply

I love how in the early seasons ghe Mane Six were mostly thinking just about their own lives.
But as you get to the middle to later seasons, they start to have a greater purpose of helping all from around Equestria and beyond.
It became for greater than just being a wonderbolt or having a boutique. But something as grand as helping a griffon village or the CMC having cutie marks to help others.
I like that.
Posted 5 months ago Report
Link Quote Reply

@Cosmas-the-Explorer
There are fanfic where she does become a persona user or kamen rider, so there probably is one.
Posted 4 months ago Report
Link Quote Reply

@CORDZ2000
I have finished Season 7. And the pilot episode of Seadon 8 School Daze.
I hope to eventually watch the MLP Movie 2017 before I go onto the rest of Season 8. The movie seems to be an interesting mystery to me since School Daze references it so much.
@Latecomer
I understand. And I definitely love those personal stories too. I guess MLP is great because it can give both sweeping larger than love stories and more personal ones.
edit: And I actually think this development from small to large scale makes sense. The early seasons, the ponies were still probabably just got out of high school. They had to learn wisdom before they could really help others and change society itself.
But once you get to the mid to late seasons, now they’ve learned a lot since then and are ready to tackle bigger challenges. Like running a school for the next generation and uniting the different races of Equestria. The same goes for the CMC how they went from students to teachers.
And of course it’s always fun to see their personal activiries and dreams come ro fruition.
@phoenixacezero
That sounds epic.
Posted 4 months ago Report
Edited 4 months ago
Link Quote Reply

School Daze in a nutshell:
Twilight: I recognize the EEA has made a decision, but given that it’s a stupid butt decision, I’ve elected to ignore it.
Posted 4 months ago Report
Link Quote Reply

Mlp has a lot of different fangame ideas. Like fighting games, rpgs, platformers even grand strategy games.
But one genre I think is neglected is point and click adventure games. Just like Syberia or the Spongebob Movie point and click adventure games (those are the one I played).
And of course the ones I havent olayed like Grim Fandango, Longest Journey, Broken Sword or Monkey Island
But I think it would be quite nice to go on an adventure and solve clues and puzzles or even try to resolve problems. It would also encourage you to be curious as you explore and interact with ibjects and creatures.
And I think it fits the genre of MLP in ways actions games probably couldn’t do as well. Since point and click can focus things besides fighting and focus on more slice of life things or maybe even mysteries.
TLDR: WHERE’S MY POINT AND CLICK ADVENTURE MLP GAME?!
Posted 4 months ago Report
Edited 4 months ago
Link Quote Reply

simpler is happier
@Cosmas-the-Explorer
You’ve reminded me of some very old games, like the Legend(s) of Kyrandia, Myst or Timelapse.
If memory serves, the latter two games’ graphics were basically nothing more than scenery. Interiors or landscapes. So, technically speaking, ‘all’ it’d take to cover the assets would be fanarts. A Kyrandia-like would need moving characters and voices in addition to that, and the voices might not even be required.
So yeah, it’s strange that there’s no such game if what you say is true. Then again, I’m not sure how popular point’n’click adventure games are nowaday. And I think the grand strategy game you mentioned is a mod rather than a game, which is also a little different.
Oh, speaking of Kyrandia…
This image is blocked by your current filter - click here to display it anyway

School Daze in a nutshell:
Twilight: I recognize the EEA has made a decision, but given that it’s a stupid butt decision, I’ve elected to ignore it. 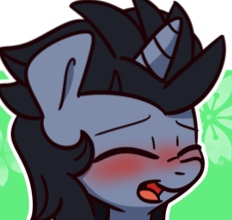 @Roseluck
Man I gotta check these games out maybe on Youtube.
If MLP came out in the 90s and early 2000s, when point and click games were more relevant, there probably would have been a fangame or actually even official game like that.
Other games were popular in the 2010s, and only a tiny niche even played of those games at that time. After all those games can be a bit “boring” to many compared to action games.
Sigh. I’m the guy who thinks the Spongebob Movie PC game was cooler than the platformer.
There needs to be revival of that genre!
Posted 4 months ago Report
Link Quote Reply

Man watching the MLP movie from 2017, really was awesome. It was just such a visual spectacle. It felt like a Disney movie.
Of course, it did seem strange why Celestia wanted to get the unknown Hippogriffs instead of the trustworthy Changelings. Probably since this movie was made in Season 4 or 5 I believe, before the Changelings or Dragons became allies.
I wish I would have watched this before School Daze. Going from Shadow Play straight to Season 8 was an awkward transition. It makes more sense why Twilight wanted to build a School of Friendship after the chaos of the movie and also how helpful other creatures could be. I think I’ll watch School Daze again with this movie in mind.
This movie was just a great time overall especially with its worldbuilding and grandeur.
Posted 4 months ago Report
Edited 4 months ago
Link Quote Reply

@ichiban iceychan 1517
So Gabby is a real pony then!
Posted 4 months ago Report
Link Quote Reply

Man I gotta check these games out maybe on Youtube.

Chances are those old games are abandonware if you want to try them yourselves. Never understood whether that’s legal though… but predictably enough, they’re also available on Good Old Games for the lower price you’d expect from games old enough to drive.
Of course, it’s still a good idea to check a let’s play to make sure you don’t buy something you’ll dislike.

If MLP came out in the 90s and early 2000s, when point and click games were more relevant, there probably would have been a fangame or actually even official game like that.
Other games were popular in the 2010s, and only a tiny niche even played of those games at that time. After all those games can be a bit “boring” to many compared to action games.

Bronies have been ridiculously productive, but I don’t think there’d have been fangames if Friendship is Magic came out one or two decades earlier. I don’t recall any fangame (other than mods) in the 2000s and the 90s, well, official video games were in their infancy, so fangames, yeah.
Might have been licensed games though. Kim Possible, Teen Titans, Avatar: The Last Airbender got video games, on the TV channel’s site if nothing else. Hell, even freaking NEOPETS got an adventure game on PS2, and that was a browser game.
Apparently Hasbro doesn’t see any future in MLP video games. Plenty of Transformers games, but MLP? Apparently a virtual pet one in 1998 and that one mobile game. Yeah. I don’t know why. Unicorn Tails is the closest ‘pony’ game I found.

Sigh. I’m the guy who thinks the Spongebob Movie PC game was cooler than the platformer.

I think the fangame Remains is the better version of Fallout: Equestria. Beat that.
I like the first Dune video game’s storyline better than the actual one, too…
Posted 4 months ago Report
Link Quote Reply

(Foil Hat)
@Roseluck
I wonder if it has anything to do with the fact that everything is a first person shooter now? What genre was the latest Transformers game?
Posted 4 months ago Report
Link Quote Reply

Moderator
TagZombie: AC15, Atk +8
In the G4 finale I wanted Vinyl Scratch to just utter a gravelly Neo-like “Woah” while lifting her sunglasses, watching some craziness from the sidelines.
Posted 4 months ago Report
Link Quote Reply

(Foil Hat)
@Cosmas-the-Explorer
I know, we have Freddi Fish and the like. But when was the last such game made?
Posted 4 months ago Report
Link Quote Reply
Interested in advertising on Derpibooru? Click here for information!