Was talking about Fix’s plotholes. Namely, the fact that despite twilight giving power to these two, seems she still has power.

If Twilight was so bothered by what the two of them did, and she had so much time to think about it, plan it out… why wouldn’t she instead consider giving Cadance control over Equestria? Would that just not let it happen in their desired rant-y way?
@Background Pony #2215

@Penguin Dragneel
I never get why some people think that someone ‘having a reason’ for doing horrible things somehow absolves them. Everyone has a ‘reason’, usually one they consider to be good* whether IRL or fiction; how does that make them automatically worthy of forgiveness and their acts nothing important?

@Background Pony #F853
I think it was more or less something like them moving on because they weren’t needed anymore, and Discord was in part motivated because of that, because he was scared to move on.
That’s what I think I recall, anyway.
Posted 7 months ago Report
Link Quote Reply
Background Pony #EB52
Less of a rant thing, but thoughts on IDW possibly losing the comics license?
Posted 7 months ago Report
Link Quote Reply

Ocs,Boops,Tickles&Memes
@Background Pony #EB52
A mixed bag
On one habd sad to see them losing pony, on the other hand hopefully the next company that gets it does the comics better
Posted 7 months ago Report
Link Quote Reply

Moderator
TagZombie: AC15, Atk +8
So there’s the Tails of Equestria RPG, I thought I remember hearing about a year ago about an actual MLP D&D license. Is that a thing yet?
Posted 7 months ago Report
Link Quote Reply

Offline
I wish people would quit fuckin’ with the staff.
If they’re anything like me, they’re not gonna respond to threats very well.
Posted 7 months ago Report
Link Quote Reply

Zamasu
Is it just me, or are the colors a little washed out in the DVD releases of FiM? In any case, they need a remaster should they release it on Blu-ray.
Posted 7 months ago Report
Link Quote Reply
DoctorWTF

@Background Pony #EB52
A mixed bag
On one habd sad to see them losing pony, on the other hand hopefully the next company that gets it does the comics better

If we’re really really lucky, the new company will have the resources to maintain G4 and G5 comics simultaneously - the fandom being what is, one would think there’d be ample demand.
Posted 7 months ago Report
Link Quote Reply

Tensa Zangetsu
@Goku Black
The series is already in HD, so a Blu-Ray release shouldn’t be too big an issue.
Posted 7 months ago Report
Link Quote Reply

World's Okayest User
Between the copious amounts of traced/stolen artwork, the premise being centered around the school, the over-emphasis on original villains, and the fact that it took 4 issues to get to the main selling point, the G1/G4 crossover is really getting up there with “RD becoming a Wonderbolt” and “ Scootaloo’s parents” on the list of things that should have been impossible to fuck up
Posted 7 months ago Report
Link Quote Reply 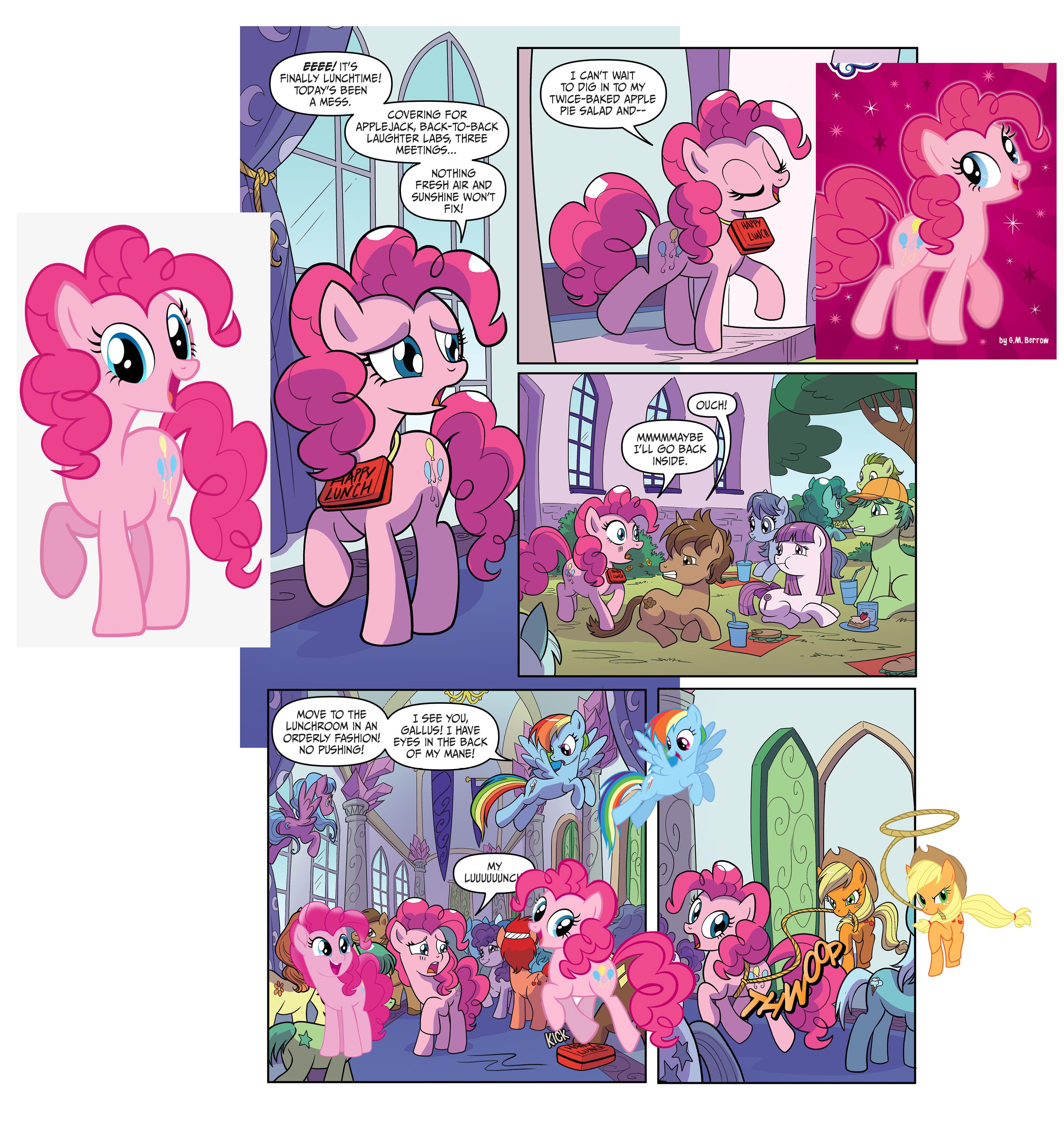 Some of the more egregious examples. Got to the point where even Uotapo is starting to point it out

Music Connoisseur
So there’s this comic that caught my eye called “Fix” which like the title says, is a fix fic/vent piece towards the Season 9 finale. I skimmed most of it because I knew what I was getting into but on one of the recent panels, I read the description and I do have something to say there. I can understand his frustration over the Princesses choosing to stone the Trio instead of trying to redeem them and I can somewhat get his point about how it goes against the idea of friendship and all that, but I drew the line over the claims that it “ruined the entire show” cause it just sounded like exaggeration. That entire finale coloring their perception of the whole show is just absurdly ludicrous and I really can’t get behind that thinking. It sounded like they were treating the whole thing way way too seriously and it’s just dumb to me. That and another description I read where they said that they can’t watch G5 because of the finale is also pretty stupid.
It’s pretty much why I’m not a fan of fix fics cause most of the time it just seems like excuses for the author to vent out and whine by using the characters as mouthpieces.
Posted 7 months ago Report
Link Quote Reply

Est. Late 2010s
@Myoozik
Do you think it’s better to have bad endings than good ones?
Posted 7 months ago Report
Link Quote Reply

Tensa Zangetsu
Since I’ve semi-retired, I figured that I should at least make one last post here, specifically about that “fix-fic” comic that’s dominated the last several pages.
It’s a repost of the comment I made on the most recent page as of today (aka the point where I decided I couldn’t take being in this fandom anymore), with minor tweaks for redundancy reduction. And considering my status, unless the author manages to do something incredibly disgusting, I won’t be making any more comments regarding it going forward.

The author continues to ignore the fact that most of the villains they claim “deserved a chance” already had one. Some took the opportunity (Sunset, Trixie, etc), but others squandered it and chose to stay evil.

THAT’S HOW REALITY WORKS. Not everyone wants to be good, even IF they have a reason to be the way that they are. Some just want to see the world burn. Something that the series (and this fandom) seem to have forgotten during the last half a decade.

Whether you like it or not, Chrysalis, Tirek, and Cozy Glow had a chance to get better. Chrysalis in particular had two chances. But each and every time, they squandered it, and went right back to their usual evil selves. At this point, being banished to another world is what they deserve, not a damn pat on the back.

Asking for those three to be redeemed is like wanting redemption for Fire Lord Ozai, Thanos, Dio Brando, Albert Wesker, and so on. It’s an incredibly messed up ideology that leads to countless tragedies, both in and out of fiction.

Someone in another thread put it best. This feels like a first draft of a comic. One that the author wrote out of an extreme hatred they had for the finale of a show about technicolor horses aimed at ages 2-11. And it SHOWS.

(Foil Hat)
@Penguin Dragneel
I wonder what this person would think if they saw some of the pony-like-alien villains I’ve written for an original IP, including a serial pedophile with over 1000 victims*, an abusive mother and misandrist wannabe-conqueror, and a teenage mass murderer who kills 415^ people in a school shooting for “ethnic cleansing”, about half of whom are children. Would they try to redeem them?
*For reference, the worst offender I know, Jimmy Savile, had about 589
^For reference, the highest death toll in a single mass shooting is between 100 and 150, depending on who you ask.
Posted 7 months ago Report
Link Quote Reply