Music Connoisseur
I just saw a thread here regarding G5 and my God was the guy such a perfect representation of the wojack doomer meme.
Posted 1 years ago Report
Link Quote Reply

@Myoozik
I posted a list of Depressive Logical Mistakes in the G5 Speculation thread. Once you know what to look for, you see them everywhere in the fandom.
Posted 1 years ago Report
Link Quote Reply

@Myoozik
Yes and no. The list can be applied to a lot of things. A couple of examples:

The idea that because Twilight’s Golden Age of Friendship eventually ended, it means she failed and that her accomplishments don’t matter.

The fan comic “Fix”, which tries to redeem The Legion of Doom, is riddled with these. 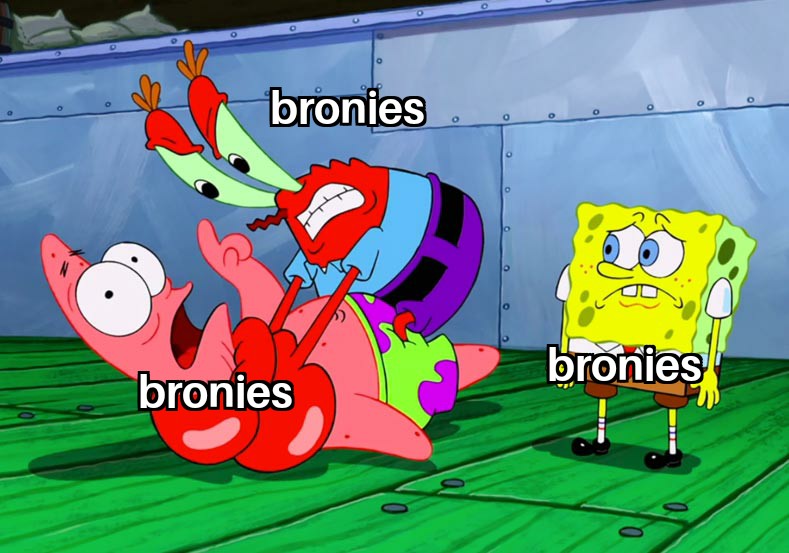 Music Connoisseur
@northern haste
Really, you can replace bronies with any other group and it’ll be as effective
Posted 1 years ago Report
Link Quote Reply

Latecomer
@Brass Beau
Fandoms? You could swap that with any major religion or political party.
Posted 1 years ago Report
Link Quote Reply

Shiny Bug
Something occured to me that I haven’t really thought of before:
The episode What Lies Beneath, where the Student 6 face their fears, has scenarios that could have been fleshed out into fantastic episodes on their own.

The three that spring to mind are Ocellus’s fear of the changeling’s bad past, Silver Stream’s fear of the Storm King, and Sandbar’s fear of disappointing his idols.

For Ocellus, this could have been a great episode, where we delve into guilt and how it can affect us. An episode really putting into light how some changelings have trouble forgiving themselves for their past actions. Sort of similar to Do Princesses Dream of Magic Sheep, but with two main differences: A fear of relapse, and guilt for collective actions rather than that of an individual.

The Silver Stream episode also could have been powerful if done right, basically delving into PTSD. If her speech was at the climax of an episode of buildup rather than as a small piece of a larger ep, it could have been much stronger.

Sandbar just needed some character development and definition. If he had an ep that cut past his easy-going exterior, and showed that sometimes he pushes himself too hard out of a fear of failing those he respects the most. Heck, could have a great moment where Applejack has a talk with him that she had gone through something similar herself, and relating to him what she learned.

The Student 6 had a lot of opportunities to delve into really interesting topics, themes, and morals, as well as further exploring non-Equestrian culture, but it was squandered, and that will always bug me.

Flop it to the princess
Yep, more examples of the show adding great concepts/locations/etc then forgetting to ever use them again. So much was introduced so fast then just set aside; here’s hoping the new show actually utilizes the concepts and ideas it introduces
Posted 1 years ago Report
Link Quote Reply

Passionate opinionator
I feel worried that the story for G5 is a possible attempt from Hasbro to tell us to piss off because they hate us. Hopefully that part is wrong but they should be fucking GRATEFUL that we saved one of their franchises to begin with. Unexpected audience or not, any publicity is good publicity.
Posted 1 years ago Report
Link Quote Reply

Flop it to the princess
We aren’t the target audience, so whether it appeals to adults or not isn’t especially relevant.
Posted 1 years ago Report
Link Quote Reply

Latecomer
@EquusStorm
Some say that the prescence of vast untapped potrntial is the fuel that drives fandom.


@Red-Supernova
…I really don’t think it has much to do with us. The target audience is probably the same as always - or perhaps a bit more cross-gender at this point.

@EquusStorm
@TheFinite
I think you’ve got it backwards, though. It’s not so much that they set the stuff and then didn’t use it. It’s more that they suddenly got a bunch of ideas late in the game. They wanted to at least get the ideas out there before the show ended, so that the other species weren’t left completely undeveloped. I actually made a list of the themes each species explores:

Credit where credit is due, we got a respectable exploration before The Student Six even showed up.

“Lost Treasure of Griffonstone” was about greed and selfishness.

“The Times They are a Changeling” was about Thorax’s guilt.

“Gauntlet of Fire” was about feminine Spike teaming up with the more masculine Ember.

“To Change a Changeling” was a thematic tour-de-force. It was about the changelings adopting a new cultural identity. It was about Pharynx’s struggle to fit it. It was about Thorax’s own guilt blinding him to his brother’s needs.

The Student Six were honestly one of my favorite things they ever added to the show. I would have loved a Season 8 part 2 where any two characters can just bond over overlapping themes.

Music Connoisseur
@TheFinite
About your Ocellus point, it also would’ve helped to have her be put in the spotlight or at least make her have a much bigger role since the rest of the Students had their chance, even Sandbar had his moments deposited still being a flat character.
Posted 1 years ago Report
Link Quote Reply

Brass Beau
Howdy from Shimmer Pope
@DerpyFast
I thought the griffons and yaks would make a great episode about personal and cultural pride. Plus, Gallus seemed to either be egotistical or self doubting and Yona teaching him pride and earned confidence would have been interesting to see.
Posted 1 years ago Report
Link Quote Reply

@Brass Beau
The show going back to its roots with an entire season of character studies would have been amazing.


@Myoozik
Here’s the thing: The struggles of The Student Six are the struggles of their respective species, but on a more personal scale. It would be weird not to have a changeling character, but so much of what you’d actually do with Ocellus had already been done with Thorax, so she kind of got the short end of the stick.

I thought Sandbar was commentary on just how inert and unaffected ponies are by most things. Luna returns, Discord returns, Canterlot gets invaded, a lost civilization returns, a new princess is crowned, ect. Most of this has no effect on the daily lives of ponies. Compare that to what a difference the defeat of Chrysalis and The Storm King made for the changelings and hippogriffs respectively. Sandbar’s Hearth’s Warming story is about how something could have gone badly, but then didn’t.
Posted 1 years ago Report
Link Quote Reply

Brass Beau
Howdy from Shimmer Pope
@DerpyFast
And then there was Sandbar’s “nightmare” about having to make a choice from a vending machine.
Posted 1 years ago Report
Link Quote Reply

I thought Sandbar was commentary on just how inert and unaffected ponies are by most things. Luna returns, Discord returns, Canterlot gets invaded, a lost civilization returns, a new princess is crowned, ect. Most of this has no effect on the daily lives of ponies. Compare that to what a difference the defeat of Chrysalis and The Storm King made for the changelings and hippogriffs respectively. Sandbar’s Hearth’s Warming story is about how something could have gone badly, but then didn’t.

That’s another good way to put it. I’ve always thought about it as a joke that he’s so mundane in comparison to the others, to make them stand out more, with his intentional shallower depth, though really there’s no reason both can’t be simultaneously true.
Posted 1 years ago Report
Link Quote Reply

#1 Spikeabuse Fan
I hate that the writers ruined the show after Season 2. There was some good stuff in Seasons 5-8, but 3, 4 & 9 were trash.
Posted 1 years ago Report
Edited 1 years ago
Link Quote Reply

Latecomer
@UserAccount
I think every season has people who love it and people who hate it.
Posted 1 years ago Report
Link Quote Reply
Interested in advertising on Derpibooru? Click here for information!