Pony Discussion » MLP G5 Discussion and Speculation Thread Search Posts
Started by Lord WyrmSpawN
Posted 5 years ago
15762 replies
Subscribe
Background Pony #78EE
Man, I love reboots! Reboot Transformers again even though it is already being rebooted for the 100th time. Reboot Avatar. Reboot Digimon. Reboot Reboots. I can’t get enough of them. The best thing is that after G5 there will be a reboot. Imagine seeing the same story from MLP FIM but with just some differences.
Posted 3 months ago Report
Link Quote Reply
Background Pony #78EE
G5 as a reboot in the leaks… It was everything G5 should have been. Oh and the villains! That hedgehog was such a great villain! And that comic relief villain, too! A small villain disguising himself as big!? How original! “But Misty joining the good guys is cliche!” No shit Sherlock. But you can accept cliches if they are from a series or cartoon you love, can’t you? The cliches from One Piece, My Hero Academia, Chainsawman, Dragon Ball, Smiling Friends, Ugly Americans, Bojack Horseman, Naruto, Bleach etc are a-okay!
Posted 3 months ago Report
Link Quote Reply

Dogs
@Hali the Emoji girl
Princess of I Really Like Her Mane.
Posted 3 months ago Report
Link Quote Reply

@Mr.Myoozik
You’re assuming I need favors. I never needed any. My purpose is to share my opinions and I don’t care if people agree with it or not. I don’t care if people like G5. Good for them if they do. I don’t hold taste against anyone because everyone’s different. Especially for fans who haven’t lived that long. The only time I react is if people tell me to stop saying my opinions.
Posted 3 months ago Report
Link Quote Reply

Pegasus
Mare: Zipp
Stallion: Rocky
Alicorn
Sunny! (Felt she should be listed as my favourite alicorn and somepony else as my favourite earth pony)
Posted 3 months ago Report
Link Quote Reply

@Hali the Emoji girl
Princess of what?

Hollow and Cold
@CORDZ2000
You should eventually be a princess of something, if the title wants to mean anything.
Posted 3 months ago Report
Link Quote Reply

Opaline, Arcana Mistress
Hey guys! I got an Opaline card! 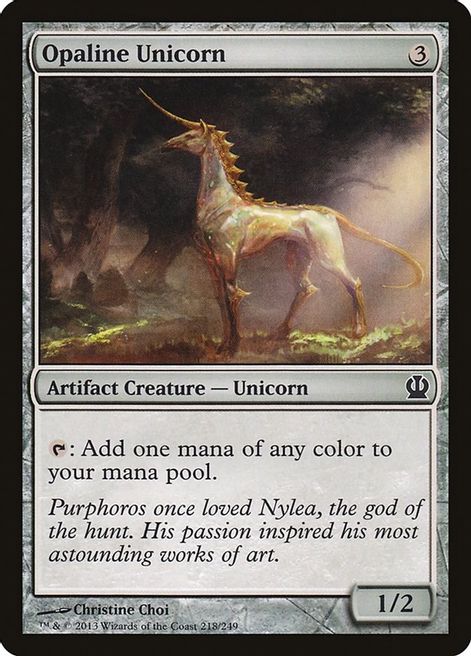 Adorable lil' antichrist
@Mr.Myoozik
I have no idea; it’s just a thought I come up with when I heard she was adopted by opaline.
Posted 3 months ago Report
Link Quote Reply

sTs trinity
@Dustcan
Well sunny wears a saddle bag, so I don’t know.
Posted 3 months ago Report
Link Quote Reply
Background Pony #808E
What if we get an episode focusing on Posey, and the episode is about an average pony having to deal with the craziness in Maretime Bay, and various inconveniences, such as not being able to get to the post office because the ponies are running in a panic and making it hard to navigate through the town?
And at the end, Posey has had enough, and lets out an angry rant over the insanity of the ponies in Maretime Bay, and how she’s just trying to get on with her day?
Posted 3 months ago Report
Link Quote Reply

Opaline, Arcana Mistress
Alrighty! I’ve finally watched until Ali-conned. Here’s a quick summary of my reactions by episode start to finish:
Izzy does it
-Going strong with the classic theme even for a few seconds.
-And Kenneth gets namedropped, who’s that other seagull?
-Hitch smoothwalker
-Alright, a simple intro, sung by Pipp herself. This must be the first ever intro in the history of mlp to feature villains since they don’t appear except for episodes only. Neat.
-Sounds like Izzy, or Pinkie alright
-Animations do feel iffy
-that’s a giant berry
-lightning in a glue bottle - Izzy said it
-Is Pipp gonna sing every song?
-She writes them too? Wait do ponies of the old ever need to write songs? Or is that music magic?
-So it’s Canterlot Boutique all over again? For 5 seconds
-Did Opaline really saved her? I doubt it.
-Hey! Name reveal! Too little too late. Still a nice name.
-Remember the Cutie Map? Kinda surprised this age old alicorn hasn’t found out about it already. The cutie mark magic I mean, not the map. It’s an age old thing since forever. She lived long that century. How does she not know?
-it appears she doesn’t know about Earth pony magic. That’s interesting.
-So that was Opaline’s mirror, and this is where she first got it even though TYT shown she already had it?
-Tank sounds better but Curtle Turtle is okay.
-Replacement scooter?
-She has like one assistant, witch

Growing pains
-That… Sounds like something Sprout would say, and he’s in the episode too
-I’m… Alright with Sprout’s new voice. Also don’t disrespect red boy!
-Maybe some classic spellbook might help
-He is, the animal whisperer
-Ouch, he’s gonna feel that all day
-Dad pun!
-I’m already spoiled what Sunny and Hitch meant by that
_Misty tried
-Don’t dragons eat gems?
-But why is it powerful?
-Title drop!
-Hitch made a tutorial, a super brief one
-Wings attained, flight not learned
-So that’s why Discord sees Fluttershy in her
-Funkin tree
-who’s the paranoid one now?
-So Hitch thought about that first, needless to say, he’s not gonna have Discord repeat his mistakes
-Well look who showed up, seems like Twilight was prepared for this
-will she be with them? Find out next time
-Weakest but cutest evil laugh ever
-Sunny face
Portrait of a princess
-Glamorous and rockin!
-Opaline is sure cunning alright
-Would that be Earth pony magic or unicorn sorcery?
-That’s Pipp’s salon, Zipp
-She needs to work on her laugh now
-Wink
-Wow, she really can sing. It’s in the family.
-Blink and you’ll miss it
-A nice and heartwarming song
-Saved by kiddies, yippie ki yay!
-Zipp hits a growth spurt
-Cool trick
Ali-conned
-Sunny goes vegan
-French fries have potatoes
-Twilight must be lucky they ignored her despite being one
-“Whatchu got there? A smoothie”
-There’s a reason why I don’t like Pipp, her sighs
-Just did the monkey
-Why do they have monkeys anyway?
-Sparky Sparkeroni’s Spark, say that 10 times fast
-You can’t kid. She’s the chosen one.
-These ponies like to please their princesses, except Twilight
-Dat squeeing
-What happened to the fourth? Oh they rotate
-Sunny and Sugar were classmates? Neato!
-Are you sure about that, shadowy alicorn?
-That’s gonna go in Pipp’s cringe compilation
-That awkward voice
-Ghost whisperer izzy?
-Her kind?
Posted 3 months ago Report
Link Quote Reply

Opaline, Arcana Mistress
Alright so for my calm and collected thoughts so far. I’m liking it, it’s a neat show so far. 1st episode was average but otherwise enjoyable. Can’t get enough of Izzy’s antics. Now comes Growing Pains and… Why is Hitch trying to undo everything he just did in ANG? To be fair, Earth Pony is super new and otherwise not in G4 but still I feel like Sprout would be the more paranoid one. Which reminds me, hey, Sprout’s back! Good to see momma’s boy return after running away and hiding for so long after getting fired. The new voice feels really off compared to the other replacements but oh well. I am a little disappointed that even when being questioned by his friends Sunny and Hitch, they don’t react more personally since they are foalhood friends right? Adding on to the fact, he nearly started a war and almost killed Sunny. Nope, just an average way too normal conversation. He did the time, he is fine. Also, Sprout’s the strongest earth pony magic user it seems. Not sure if that’ll go anywhere. Also I don’t how long has it been since ANG but Sprout’s even cooler with magic than Hitch was, alright. So cut to Hitch planning to remove the Crystal, did anyone notice the resonance when he touched it? Immediately after that he changes his mind. I think that’s why anyway, it doesn’t look voluntarily. Also hey, Twilight’s back, but how back? She said she’ll be with them but in what way does she meant and if she can mean it.
Now on to Portrait of a Princess, looks like your standard FIM quarrel episode but for the minute details… Opaline can conjure a flower even though Earth Pony magic is just unlocked, I think it’s just her standard sorcery since she implied she doesn’t have it. Queen Haven is surprisingly a good singer. Must be in the blood for the family to be excellent singers. I’m no expert in the music industry but their dad should sound as mesmerising. Don’t have a specific singer in mind. Also, is there a screencap of the middle painting where Zipp looks taller and grumpier?
And finally Ali-conned, as usual the townsponies are being ungrateful just like the ancient times. I mean in fairness, Twilight despite being an alicorn isn’t considered an official princess yet so Mr. Stripes have every entitlement to disrespect Twilight or her friends and she can’t do anything because that’s against the rules. Meanwhile Sunny gets worshipped like a goddess and only because of that. Polar opposites I say. Also, French fries? Dining must have evolved over time if they no longer eat hay fries. And yeah, I do ironically feel the population more than Sunny but hey, nice to see her try something like the activist she is. I mean has she ever thought of unbanning mayonnaise as an alicorn? To answer my least favourite pony, I’ll say Pipp, I am from gen z myself but am otherwise not a zoomer and Pipp regardless of episode but most prominently in that one, is nothing but annoying. Her stature and height fits her level of immaturity at least. Though the cringe compilation itself amused me when Sparky made it so yay to him. Also I know Sugar Moonlight is a background pony, but I sure as heck wasn’t expecting they were classmates. So Sunny’s friends with her but are not close friends anymore. If anything Sugar found her own group of besties that look like her and found a career as a influencer too. Good on her and good on them!
Now for Opaline, so according to her she acted like she really was an alicorn and that there are more of her? If that’s true, this could mean the Discord comic arc took place after chapter 2 since Twilight didn’t spill too much other than “EPM unlocked, Opaline steals magic, too powerful, you’re the chosen one”. But Discord gave a slightly more detailed story to the cataclysm. Only being Mr unreliable, he either has skewed or genuinely got some details wrong. Maybe Opaline disguised herself as a unicorn but otherwise didn’t actually care for them? That would explain why even Fluttershy didn’t noticed, she would know since it’s outright impossible according to even Celestia and Luna. Maybe there are others out there. Too bad the olden g4 heroes will never get to see that. But yeah, kind of interesting. It also ties in Sunny’s knowledge on other characters and old locations assuming she knows as much as we did but simply didn’t mention enough and the fact Hitch was going to do a similar thing to Discord but remembered that its definitely a bad idea. Only continuity error is the Lighthouse not being renovated but yeah. Those are my thoughts on the first half of the chapter.
Posted 3 months ago Report
Link Quote Reply
Background Pony #808E
Maybe it’s just me, but Queen Haven can be surprisingly wise.
Posted 3 months ago Report
Link Quote Reply

Opaline, Arcana Mistress
@Background Pony #808E
Or a great singer. There’s a lot to her than we thought.
Posted 3 months ago Report
Link Quote Reply
Background Pony #808E
What if it’s revealed that none of the unicorns in Bridlewood like Alphabittle, and they only put up with him because he owns the teahouse?
Posted 3 months ago Report
Link Quote Reply
Interested in advertising on Derpibooru? Click here for information!