Moderator
TagZombie: AC15, Atk +8
I missed last week (which is why none of the episode 29 tags were updated) but I have to say now that I’m caught up, Misty’s evil laugh attempt sent me.
Now, to watch the movie and all of MYM for the first time…
Posted 4 months ago Report
Edited 4 months ago
Link Quote Reply

Zipp is secretly cuddly
We haven’t seen Rocky in TYT for a while. Wonder if it’s a plot-related thing or they just don’t use him
Last time we saw him was in “Another Pony’s Trash” the 23rd episode. 7 episodes ago.
Sure, I like Jazz way better than Rocky. But it is still odd he hasn’t at least appeared in the background somewhere
Posted 4 months ago Report
Edited 4 months ago
Link Quote Reply

Zipp is secretly cuddly
@Dustcan
I loved that!
She looked so great! Sunny is my favourite alicorn! (“Favourite earth pony” goes to someone else)
I would say she’s my favourite of the M5 but that keeps changing so I guess I like each of the M5 equally
Posted 4 months ago Report
Link Quote Reply

Zipp is secretly cuddly
Also. In the episode You can see Spike’s wings on the clothing racks when Jazz is running around looking for something to wear
This image is blocked by your current filter - click here to display it anyway

Dogs
Nightmare Night Party
I got a bit excited seeing the 30 min length on the Youtube thumbnail. On a hunch I skipped ahead a bit to see if it really was an extended episode but no, it’s just a new episode put inside a compilation. I know they’ve been doing that a lot with these shorts but this is the first time they debuted a new episode with one.
It’s great to see which tradition survived the ages. I wonder how much of Nightmare Night’s story is intact, and how much do ponies remember Luna. I mean, even by the time of FIM we already saw that Equestria had forgotten that NMM and Luna was the same pony.
I’m almost certain we’ve seen rarity wear Pipp’s costume. Or at least something like it, or somepony has. But I can’t figure out who it was or where.
I recognize the creepy twin girl reference with the Pippsqueaks which I’ll now be using since that’s what they’re refered to in MYM and “nuovo-CMC” is unwieldy but I’ve never actually seen the movie or know who they are.
Surprised at the “Princess Zephyrina” line. Weird of Pipp to say it and weird of Zipp to no flinch over it.
Hitch must really like that disco costume of his. And I almost wonder of Pipp was being sly with him by saying the getup wasn’t any different than usual and the mustache was the entire costume.
I’ve already mentioned the amount of bae with Nightmare Sunny (reminder:it’s a lot), but I think this is the first time TYT has alluded to Sunny being a history nut. It is a surprise that she picked NMM of all ponies and not Twilight though. I also wonder if the wings are a part of the getup or they just painted Sunny’s ethereal wings.
Well. There’s always been fusion with lead characters, and I don’t think Izzy’s costume will change that one bit.
Misty is here and in costume. I’m thinking this is half due to Opaline’s pestering and also as an unadmitted desire to partake in the festivities.
Pegasnails may or may not be a recent phenomenon if Opaline’s reaction is anything to go by.
Song’s okay. Maybe something to throw in in the background every once in a while but eh.
I like how Misty’s just been a background annoyance in these last 2 episodes. She and Opaline have been more entertaining as bumbling mischief makers than they were in MYM as semi-actual threats. Still, hope future episodes find a nice middle ground between 2 before the big spectacle where they take center stage as actual villainy.
Still wondering if “sparkles” are an actual thing or if Izzy is just being Izzy.
Oof. I too thought Opaline was working her way up to complimenting Misty, but the moment I saw those hopeful eyes I knew we both were in for disappointment. Opaline is not just her boss, she’s technically her stepmom after all.
Before it was earth ponies who were scrubs. Now pegasi have the least flashy magic. How the turns have tabled these unknown number of moons. Unicorns are still the master race so all’s right in Equestria though.
Izzy’s still trying to break Misty out of her shell. Misty’s totes gonna join the Mane 5 and Izzy will finally get that unicorn friend.
Yeah this was a pretty good episode. Still sour about being wrongfooted with the length but hey I’m already well used to the 5 min runtime. Seeing the Pippsqueaks laughing with Rufus over him spooking them was nice and makes me want to see a future episode showing them beings friends. Seeing side characters develop is always fun, and since Rufus isn’t a stranger to them we know the Pippsqueaks won’t have a problem getting into his unmarked van for free ice cream.
I wonder if Misty will get that compliment before or after she betrays Opaline though?
Posted 4 months ago Report
Edited 4 months ago
Link Quote Reply

Hollow and Cold
Okay, we get it, Misty is gonna ‘join’ the group.
Say it so much, you’re gonna jinx it.
Posted 4 months ago Report
Link Quote Reply

Zipp is secretly cuddly
The eyebrows on the G5 characters aren’t actually eyebrows
They’re markings above the eye (like how some dog breeds have those markings above theirs! Like rottweilers for example. But they are more thin and long. Plus most ponies have them)
Posted 4 months ago Report
Edited 4 months ago
Link Quote Reply
Background Pony #808E
Could G5 become the Star Trek: TNG of MLP? A sequel to a massively popular show that had a rough start and was stuck in its predecessor’s shadow, but eventually got better and could stand on its own?
Posted 4 months ago Report
Link Quote Reply 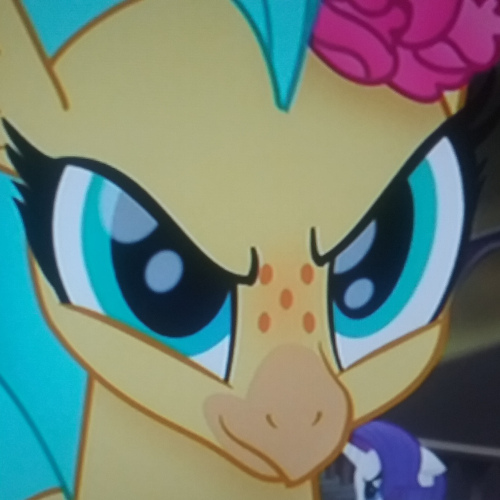 @Background Pony #808E
Funny you should mention that. I recently finished Star Trek: The Original Series, and started TNG. Like ANG, the TNG premier had a bunch of things that were definitely going to catch the attention of returning fans:
It’s funny, because The Original Series is great, but it can be hard to take seriously sometimes because of the lack on continuity, Shatner’s acting, and general 60s cheesiness. It’s G5 that has a similar stigma, because of how the animation looks.
But you know what G5 actually reminds me of? The big picture reminds me of The MCU. The setting is evolving, and there are distinct phases separated by big events. On a smaller scale, it reminds me of The Simpsons. The setting is developed enough that you can just grab a couple of characters and pair them up for a story.
Posted 4 months ago Report
Link Quote Reply

your current filter.
do they have mirrors more advance then ours or something?
Posted 4 months ago Report
Link Quote Reply

Zipp is secretly cuddly
@Shimmering Spectacle
Mirrors like that has been shown in many episodes before that one
But Jazz totally rocks that mask!
Posted 4 months ago Report
Link Quote Reply

Zipp is secretly cuddly
@Shimmering Spectacle
Well… there’s possibly more but… in “Mane Melody” Pipp was showing Izzy what some manestyles would look on her before she tried them. Which was the one that covered her face for the rest of the episode.
In the beginning of “All That Jazz” Dahlia was seeing what certain patterns would look on her hooves using a similar mirror.
If you meant the mask then…
Dunno. It just looks good on her, matches the dyed part of her mane (assuming the purple is dye). I guess it’s just my opinion
Posted 4 months ago Report
Link Quote Reply

So here’s something:
We know that Zipp and Queen Haven used to have a good relationship that deteriorated at some point. Now, Queen Haven wants to rebuild that relationship, but it’s a two-way street. In Portrait of a Princess, Haven is willing to call Zipp “Detective Zipp”, but Zipp has to show some affection first.
There’s a parallel between this and the Portrait Day song. I think this is a song Queen Haven came up with, to get her daughters to cooperate. It’s two lines that are requests, then two lines that are an emotional reward. The final scene of the episode bookends this idea; Zipp willingly showed up for portrait day, and it looks like Queen Haven let them get it over with as quickly as possible.
Posted 4 months ago Report
Link Quote Reply
Background Pony #808E
Sugar Moonlight sees that Sunny is an alicorn. She then humblebrags.
“Wow, you’re an alicorn now! And I’m just a rich and successful model/influencer with tons of followers”.
Posted 4 months ago Report
Link Quote Reply

Dogs
@Background Pony #808E
Besides the depressing reasons, most fan songs were remixes. G5 Doesn’t have that many songs.
Posted 4 months ago Report
Link Quote Reply

Ocs,Boops,Tickles&Memes
@Dustcan
by “depressing reasons” you mean that the majorty of brony musicians have moved away from making MLP related music?
Posted 4 months ago Report
Link Quote Reply

Dogs
@icicle wicicle 1517
Well sure go ahead and say it out loud and make a guy sad.
Posted 4 months ago Report
Link Quote Reply

Music Connoisseur
Tirek, Chrysalis and Sombra cosplays when?
I liked the newest episode of Tell Your Tale, it was fun seeing Misty act like a villain
Posted 4 months ago Report
Link Quote Reply
Interested in advertising on Derpibooru? Click here for information!