@Hilcenias
What do you mean by that?
Posted 3 years ago Report
Link Quote Reply

The leaks, i hear theirs gonna be alternate worlds but it was never explained in detail.

This actually sounds too deep/complex for a team like DHX :]

Hilcenias
G5 Optimist | Tumblrina
@Background Pony #D55B
Yeah, I agree. But I don't know for certain. I haven’t got the full details of what we know so far. Only that the new designs look…interesting, and that there’s a movie that this Moliminous guy claimed isn’t happening anymore, and I don’t know WHERE he got that information from or if I misheard him and he phrased it as a hypothetical scenario instead.
Posted 3 years ago Report
Edited 3 years ago
Link Quote Reply

Abandoned By Hope
@Hilcenias
One world for each pony race, I believe.

And balancing that is rather high-fantasy stuff.

Hilcenias
G5 Optimist | Tumblrina
@PonyPon
I just hope the morality system isn't of the “Black and White” variant. It gets boring after a while.
Posted 3 years ago Report
Edited 3 years ago
Link Quote Reply

Worldbuilding Addict
There's little enough to go on, no question, but as for thoughts on and what I would like to see from G5…

I'm happy to see it's going to be a fantasy series along the general lines of My Little Pony 'n Friends and FiM — no big surprise, I think, given that the more fantasy takes on MLP seem to have been the ones that proved more popular.

I'm not particularly surprised by seeing the ways characters like Twilight, AJ and Fluttershy have been reimagined, and to be honest I'm not entirely sure why so many people are so shocked. By and large, Hasbro seems to be doing what they've always done with the franchise: you have a more or less stable core to each character that connects all the incarnations, but the additional details and personality change or don't as needed. For instance, I could see the issue with Applejack if this was a continuation of G4, but G4 Applejack is not a continuation of G1 Applejack, either — they both like apples, they're both outdoorsy and they both tend apple orchards, and they have the same color scheme, but besides that they're clearly different characters.

Earth pony Twilight is going to take some getting used to, though. Maybe earth pony magic is going to be more overt this tame around?

To be honest, I hope the main cast won't consist entirely of reimagined G4 characters. I'm very happy at least four are, if nothing else, being considered, but I'd like to see some other characters introduced in the main roster. The franchise restructured the main casts between most reboots, and I think introducing some new main characters (whether more or less straight up invented like Rarity was or as revamped versions of older characters) would help make G5 feel more like its own thing rather than G4 take 2.

Of course, I hardly expect to see the other characters just not appear. Even in G4, the entire main G3 cast has appeared as at least secondary or one-off characters.

I'm not entirely sure how I feel about the many worlds thing, but I don't think I'll form hard opinions until we get more official info in that regard.

And of course, it's probably worth keeping in mind that this is all still at the design phase and there's two years to go before release. It's entirely possible things present in the leaks will be changed or dropped outright, or new things added, between here and 2020.

All in all, I remain hopeful. 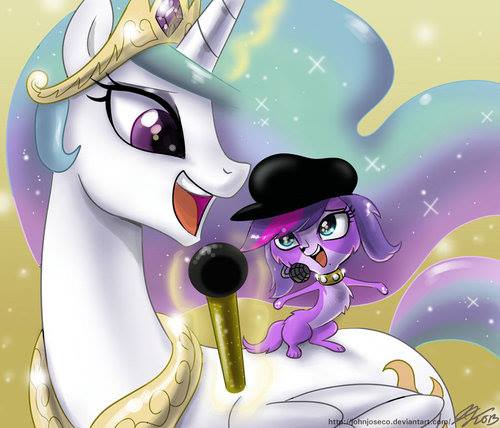 The leaks, i hear theirs gonna be alternate worlds but it was never explained in detail.

Hilcenias
G5 Optimist | Tumblrina
@Applepie2018
Yeah, if Megan Williams gets a comeback in all for it.
Posted 3 years ago Report
Edited 3 years ago
Link Quote Reply

Maybe that’s how Spike will be introduced. Saying something about how it’s not a “Mane Eight” but instead it’s like “two support groups”.

Now that’s very interesting to me.

One thing that sounds interesting is that apparently the morality isn’t all Black and White?


Because that sounds rather appealing to me.

Personally, I'm very much on board with a unicorn Fluttershy for G5. The concept art for it is very good and the inevitable G4 Fluttershy x G5 Fluttershy fics will likely be an absolute delight
Posted 3 years ago Report
Link Quote Reply

Hilcenias
G5 Optimist | Tumblrina
I’m excited for all of this.

The idea of going to alternate worlds reminds me of Michio Kaku and this video he presented on Big Think.

Hilcenias
G5 Optimist | Tumblrina
It also kinda of reminds me of Zeeya Merali, and her idea on creating other Universes.
Posted 3 years ago Report
Link Quote Reply

Hilcenias
G5 Optimist | Tumblrina
@Darth Sonic
Oh trust me, I know. That was just the first thing that came to mind.


Either way, the alternate universes is a trope I’m warming up to because of Michio Kaku and Merali. That’s why I brought them up. I wasn’t trying to say it would be a Space Opera.


It’s just, people traveling to younger Universes to escape the death of their own is probably THE most beautiful and powerful thing i could ever witness.

What do you think of G5, based on what we know?


Sounds good to me

Worldbuilding Addict
Thinking of it now, three things I really hope to see in G5 are dragons (besides Spike, obviously, since I feel it's a given he'll be in G5), cloud cities (maybe more than just the one, even) and zebras.
Posted 3 years ago Report
Edited 3 years ago
Link Quote Reply
Interested in advertising on Derpibooru? Click here for information!