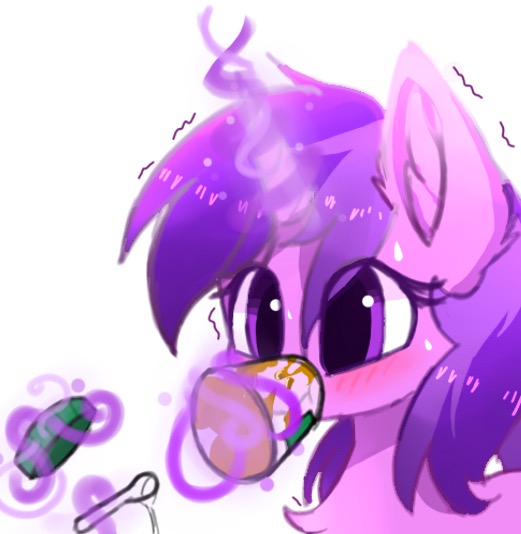 Background Purple Smart
Crack shipping is something I never thought I would get myself into.. until I did… and I took them pretty seriously (my gallery is full of Amethystlane and DoubleBlaze, I support Maudwich, DinkyRumble,… ). The thing I really like about crack shipping is that you can make your own "meeting each other" story, opens up scenarios for your pair(s). I'm a hunger for stories.
Posted 3 years ago Report
Link Quote Reply

nobody's favorite
Here's one I just thought of: Perhaps Bon Bon and Zecora had a thing going back when Bon Bon was still Special Agent Sweetie Drops, long before Lyra entered the picture. If nothing else, Zecora knows how to keep a secret.
Posted 3 years ago Report
Link Quote Reply

Commissions Open
Its like 3am where I live so this might just be sleep talking. But Garble and Limestone Pie is an attractive ship to me. Just sayin.

I've hit a bit of an impasse as a next gen artist. At first I shipped Garble and Ember. I thought they looked cute together. But over time I've gotten less interested in Ember. Like, she's a bit boring. And the whole thing about being a DragonLord is really ill-conceived, I don't know what to do with her as a character.

Once I've settled on a ship I tend to not change my mind, but seemingly over night the idea of Garble and Limestone hit me like a wrecking ball.


Posted 3 years ago Report
Edited 3 years ago
Link Quote Reply
Background Pony #3BA7
Now that Cheerilee is free who's up for some crack shippings for her? For my choice, I recently re-discovered some ancient ( read: Spring of 2013) Sombra x Cheerilee pics and I thought she'd make for an interesting companion with her much sunnier disposition compared to Sombra's USMC Vietnam War veteran levels of grumpiness and dourness in a redeemed/reformed Sombra AU. She would fill a role similar to what Fluttershy is Discord at the start and then things would progress from there.
Posted 3 years ago Report
Link Quote Reply

Steel/Lonely type
Would it count to say the show is taking Sugarmac too seriously? I know I sound like and ass, and all my information is secondary, but come on! They never met, or even live close enough to justify it, and the first ep they meet it's the start of their ship!
Posted 3 years ago Report
Link Quote Reply

Because COLORING!!
@Meanlucario
Well at least they were each separately established as their own characters prior to this. Can you imagine if Big Mac's first crush was somepony we had never seen or heard about until this episode?
Posted 3 years ago Report
Link Quote Reply

Steel/Lonely type
@LanceOmikron
Sugar didn't have much before hand, so it's practically the same as Pinkie's image of Maud before her appearance. Also, no one has told me yet, but did they bounce off each other well? That may make me easier on the ship if someone told me.
Posted 3 years ago Report
Link Quote Reply 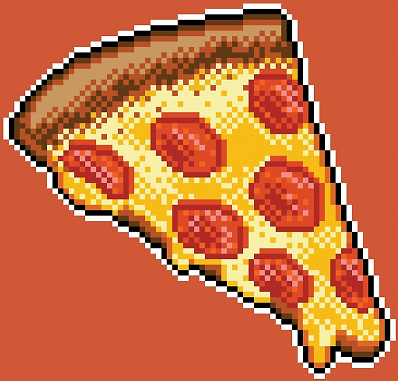 @Meanlucario
Words cannot express how much I agree with you, I feel very sad, and angry… okay make that 99% sad 1% angry. When Images and the premise of "Hard To Say Anything" were revealed I'm not gonna lie, they were enough to make me worry about the supposed future of Macora, I never thought I would want something to turn out badly for Big Mac. I kept telling myself that "No matter what happens, Macora will always be my OTP." But yeah… having possible evidence for it in canon would've been nice added bonus. For Sugar Belle there was no prior evidence, the whole thing coming out of nowhere like that just sounds like someone in the Dev room just took a random ball and ran with it. the episode should have been about learning to deal with rejection, letting go, respecting the other's choice, moving on, and getting over love that was lost. A happy ending just would not have been an educational or helpful for a show that teaches lessons like MLP. Yes those lessons were passed onto Feather Bangs, but all that did was reduce the impact of the lesson a character we never met before learning something just feels empty, while the same thing happening one we have known for years is priceless. Instead of those valuable lessons all we got was Don't interfere with romance. Seriously? Didn't the crusaders already learn that same exact lesson in the Hearts and Hooves Day episode? Sigh I try my best not to be a slave to canon events, but damn this was real blow to my ego.

Background Purple Smart
@Careless Whisper
I really hate this episode… I can forgive that it crushed my ship… but the writing is awful as hell and all of the reason you said.
Posted 3 years ago Report
Link Quote Reply

Kegworth
@Amethyst Star
The only comfort i can take is that I'm not the only one who hates it. Becky Wangberg, why did you think that was a good idea? Because they're both country bumpkins? By that logic I could pair off Derpy with Bulk Biceps for no other reason than because neither one of them are very smart.

Background Purple Smart
@Careless Whisper
I'm just gonna paste my mini-rant about it on MLP wikia: I just found a new episode to go to my top 10 worst episode list… Not only that it crushed my ship, it's also super stupid. CMC's worst presentation is in this episode, I can forgive them in Hearts and Hooves Day because they were kids back then, now they're not young kids anymore but acting all stupid in this episode. Why did they choose Sugar Belle but not Marble Pie? Although I ship CheeriMac but MarbleMac is better than SugarMac, and Marble Pie at least have a personality, what do we learn about Sugar Belle in this episode? She likes cakes! That's all! The two side of the songs are awful, Feather Bangs's one is okay but Mac's is simply awful to hear. The good of the episode? Let's see… I like Feather Bangs (he's handsome) and… the storyboarding for the song and… The Show Stopper call back? This felt like a script for another show, not MLP, I think the writer take a little too much risk for this episode.
Posted 3 years ago Report
Link Quote Reply
Scrounge

nobody's favorite
How about Fleetfoot and Feather Bangs? A strong, famous, gifted flyer who sometimes doesn't notice she's crossed a line when she's going after what she wants and her cute, vapid, eager-to-please boytoy, so stereotypically cool on the outside but secretly desperate for approval.

@Ranch
Next gen? Those two? Yikes. Their kid's gotta be a holy terror…


@Careless Whisper
It's highly unlikely to happen in canon, but theoretically they could still break up.

But yeah, this is basically everything people threw a fit about Flash Sentry over, except they actually become a couple instead of just falling over each other like idiots. She probably won't get the hate over it that Flash gets (and seriously, anyone still on his case at this point is just kicking him while he's down), though.

Steel/Lonely type
@Careless Whisper
@Amethyst Star
I haven't seen the episode yet myself, but even before you mention how flat a personality they gave Sugar in it, quite possibly making it shallow on Mac's part, I wasn't looking forwarded to seeing it.
Posted 3 years ago Report
Link Quote Reply

Witch Dagger!
@Scrounge
Sad thing is, Sugar Belle is quite likeable and had a better introduction over Flash, so no one is going to give her any heat over this, unlike poor Flash, who had the tar kicked out of him over the entire thing with Twi (but another reason is that's because of Twi being a mane character while Sugar is more of a minor/side character).

Not to mention hearing about how flat Sugar Belle is AND the fact she's with Big Mac took my already low expectations of the episode and just made them even LOWER than they already are.

Commissions Open
About the most recent episode…yeah.

If it's any consolation to you I think a lot of people who already had BigMac ships will just ignore this. As a LunaMac shipper I already knew my ship was never going to happen anyway, so I happily ignore this canon, as I'm already eyeballs deep into AU territory long before this.

What did this episode even have going for it?

- Finger- I mean Feather Bangs was probably the only positive I can give this episode. How many times do male characters even get to sing? Not counting Spike who is voiced by a woman and is a terrible singer anyway. I liked everything about Feather but in a joking sort of way since he was given no depth until the VERY END.

What was bad about this episode?

- Everything else. The fact that they treat the love life of a beloved character as something that can be resolved in a single episode, this is far and away worse than anything the Equestria Girls movies did, but nobody will care because BigMac isn't a waifu. But it is safe to say this is one of the worst episodes of the season so far.

SugarBelle is boring, we know she likes to make cakes, so what? So does Pinkie Pie. Why doesn't Mac wanna be with her? In fact just thinking about it is making me like the idea of PinkieMac.

The CMC are doing their stupid shit again, instead of handling this like adults and just having Mac talk it out with SugarBelle, they're basically doing the stupid love poison thing but without the love poison. They should know better by now. And why does BigMac go along with this idiocy?

I love how they give Feather Bangs some depth right on the ass end of the episode, something the CMC could properly work with, but now we'll never see that happen. That could have been a better episode.
Posted 3 years ago Report
Link Quote Reply

Because COLORING!!
Erm… do you think that maybe you could all just be blowing this out of proportion?
Posted 3 years ago Report
Link Quote Reply
Background Pony #3BA7
@Ranch
Ew, Lunamac. One of the very few ships I never got the deal of. I mean, if you wanna ship Mac with a princess, Celestia seems much more compatible with Mac.
Posted 3 years ago Report
Link Quote Reply

Ew, your opinion, to the trash with it.

Wow you're a bit of a cunt.

"Oh woah woah back off before we derail the thread even though we're talking about shipping in here so really nothing was derailed at all."

I don't think I'm overreacting. I think for this to be an episode focused on romance, they did a bad job with it. And if this is the best they could do then I don't ever want them to write a romance episode ever again.
Posted 3 years ago Report
Edited 3 years ago
Link Quote Reply
Background Pony #3BA7
@Ranch
You wanna play rough, hijo de puta? Lunamac is a below trash-tier ship and your taste is shit for supporting it. Go ahead respond. Besides I don't really give a damn about your opinion. And you seem like a bit of a thundercunt.
Posted 3 years ago Report
Link Quote Reply

Oh my god you used Spanish. I actually laughed. I feel better now.

So anyway. Does anyone actually like the ship this episode has created?