3-3/4" Army Man Fan
@Cyborg_pony
Which human characters was it that made people uncomfortable and got banned? Because I’m not remembering any of that.
Posted 1 years ago Report
Link Quote Reply 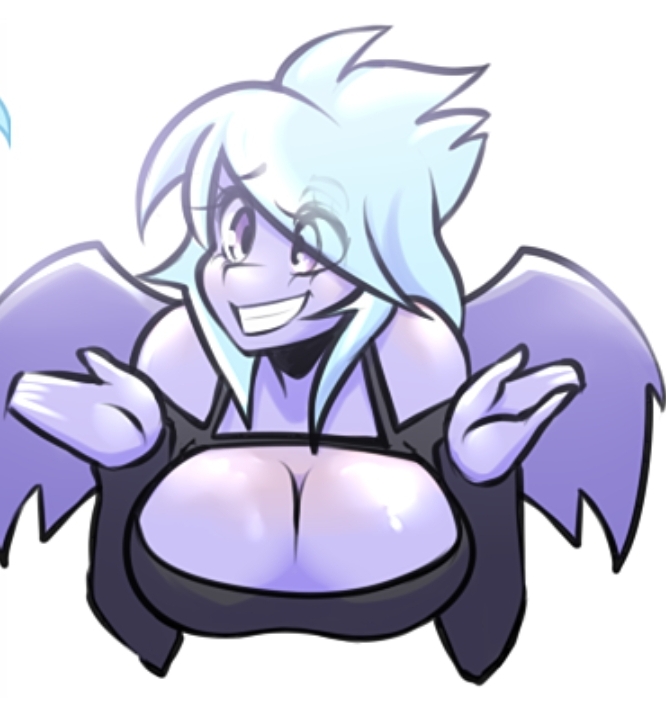 And the reason why the mods needed to take that down is because it’s actually illegal from where the server’s are being hosted, and if the site kept up images that had a naked child on here, then the site would have gotten into a ton of legal trouble and would possibly have had the plug pulled. 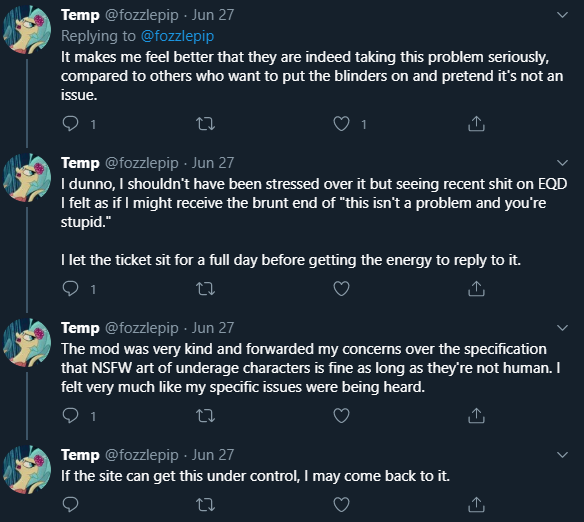 Derpy Whooves probably didn’t expect this message to be posted on twitter, but it was. Good to know that we are all part of an “undesireable” group in their eyes. Maybe even “deplorable”?

I wonder if foalcon is also an “undesireable group”, that they are just looking for an excuse to get rid of.
Go on, ban foalcon, and drive even more people from your site… you should totally do that :)
Posted 1 years ago Report
Link Quote Reply

Imagine being called undesirable because people don’t like you shut out Nazi images but continue to allow communist ones.

Pomegranates :P
@Background Pony #1714
I’ve heard from a former user on this site that he’s good at “quelling” people out of most tensions towards what they do here. Kinda like a PR guy.

Trust me, I for one have seen the true faces of some of the staff members on this site regarding this issue. The know what they want.
I’m not surprised in anyway except for the fact it took them this long to go through with it.

Either way, calling people “undesirable” is a quick way to start more shit.

You know, here’s the craziest thing: going through the “nazi” tag, I’m finding that outside of most Aryanne images and some obvious shitposts, a number of the “nazi” images are also images that are in context related to World War II - you know, the time period where there would be Nazis. Of course this would probably be understood right away if the people uploading them had also bothered to add the “world war ii” tag as well, but once again too many people just won’t fucking tag their shit properly!

@Crade
I don’t know why he was complaining about having to manage the DNPs since it looks like this DNP pledge is exactly what he wants: “undesirables” leaving the site.

Maybe he just likes complaining, because it makes him seem like the poor innocent victim of the mean nazi users who are mad because they cant be racist anymore.

Don’t forget Patreon and Exhentai. Patreon banned pretty much all anime art because they think it’s all pedophilia and soon probably will be MLP too because according to them it’s all zoophilia. Wouldn’t be surprised if it happens, they already went after the people who created Besti. Only thing that seems to be acceptable to them is if people slap a wolf head on a human body.

Country where Exhentai was hosted banned loli content, so the site closed but thank god they found another country where they were able to host it. If that wouldn’t have happened, tons of work could have been lost just like that.

Censorship always leads to more censorship, this has been said multiple times but people never care until they come after the shit they enjoy and then they start complaining. What’s happening with the internet really worries me. Looks like it’s just getting worse and worse every day. It doesn’t help either that people are trying to make internet more kid friendly when they clearly should know that internet isn’t a place for kids, never has been. I have seen so many underage’s especially on Twatter harassing artists because they just happened to see their art and didn’t like it because they’re underage and can’t handle seeing porn, so they gotta bitch and complain about it instead of just you know, block them. Same with YouTube COPPA shit, so many videos have been marked for kids and that means you can’t see old comments either anymore or add them to your playlists. Worst part is that they mark shit like Happy Three Friends for kids too.
Posted 1 years ago Report
Link Quote Reply
Background Pony #5E45
@Zerowinger
I’ve seen two separate people include that dude who just makes ponies in WWII uniforms (including Nazi uniforms) in their Nazi witch hunt, one posting a fraudulent report to brag about it on Twitter, the other commenting on one of them to complain about fascism.

Then again maybe it wasn’t fraudulent. After all the rule at the time was against “trivializing Nazis”, which like I said could feasibly include just juxtaposing ponies and Nazis in any context, with enough mental gymnastics.

Pomegranates :P
@Zerowinger
It’s not like HISTORY has ever stopped them from making a huge fuss over the things.
These are the same kind of folks who have no shame about rewriting, deny, and misappropriate historical events and figures.
Posted 1 years ago Report
Link Quote Reply
Background Pony #81CE
@Crade
I can’t wait to see what excuse is used now that the mask is off.
Posted 1 years ago Report
Link Quote Reply
Interested in advertising on Derpibooru? Click here for information!