What about the 3D remake of 2? The entire reason Dread is the way it is, is because of that game. Many of Samus’ movement are from that game
Posted 3 months ago Report
Link Quote Reply

Monado User
@Background Pony #F865
So you were close to the 3D Maze.

Yeah you were about 2/3 of finishing the game.

I wanted to find the running animation for Samus in both games, but found this:

I dunno why, but the tarp just looks badass.
Posted 3 months ago Report
Link Quote Reply 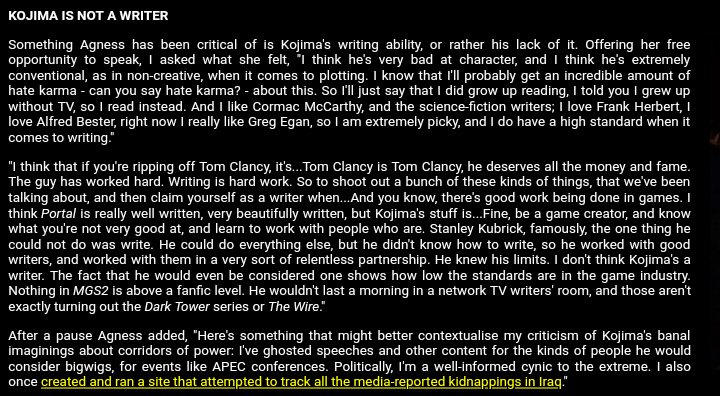 She’s like… the third person - and the second translator - to repeat the exact same thing about Kojima. Just FYI.

@Terminal Red
Imma try defend Kojima on only one point: Man can write about any theme he wants, even on themes he knows nothing about.
The whole MGS series has always been a parody of American / Western Militarism in popular hollywood movies, anyway. He’s been writing fanfics for entertainment.
Posted 3 months ago Report
Link Quote Reply

Forest of Sin
Who wants some Monster Hunter horror?

“Watching a bunch of Michael Bay movies does not [teach you about Western Media]”.

Ouch. That’s a burn you don’t recover from.

But more to the point, yeah. She’s got a lot of points. It’s long been known that Kojima really wants to write movies. Like I contend with Kojima not knowing how to write characters or entertaining plots, but when you make dozens of 20 minute to hour long cutscenes you’re kinda taking the easy road to explore your character’s motivations. He very much does not have the ability to do more with less.

That and MGS are typically my only exposure to political/war thrillers, so I don’t know if he’s any good at that compared to his peers or if the novelty of the genre is artificially boosting my enjoyment.
Posted 3 months ago Report
Link Quote Reply

I think Kojima is the type of writer who writes great stories but doesn’t know how to write these stories in a way that many people will love or even localize it to other languages (in his case, japanese to english). That part has to be insanely stressing for a translator.

For example, I really like Death Stranding, but I don’t like the characters, the writing, the dialogue or the constant use of continuous shots, because most of this information is either dense or redundant, which is a problem. You could argue that the e-mails tell that story you’re interested to read, but I think there are better options. Different camera angles, different timing, concise lines, emotion, etc.

Even though I like Kojima, I think he needs to know how to make it concise or simple, especially if he’s really interested in the language of cinema.
Posted 3 months ago Report
Link Quote Reply

Forest of Sin
So Kojima is an idea guy like George Lucas.
Posted 3 months ago Report
Link Quote Reply

@Terminal Red
Kojima’s big dream is he wanted to be apart of Hollywood. He’ll say and do anything to feel like, and try to be Hollywood - and knowing he has such a cult following, he thinks they’ll eat up whatever.(Reminder; he made Lords of Shadow) There’s many reasons why they’re selling Death Stranding “Director’s Cut” (can’t get more director’s cut then the first) onto PS5 at $70 just two years removed from release date.
Posted 3 months ago Report
Link Quote Reply

Do we really have to see George Lucas’ Howard The Duck abomination?

Forest of Sin
@igotnopicks
I’m sure that Kojima has his share of terrible products that aren’t nearly as well known as Metal Gear. 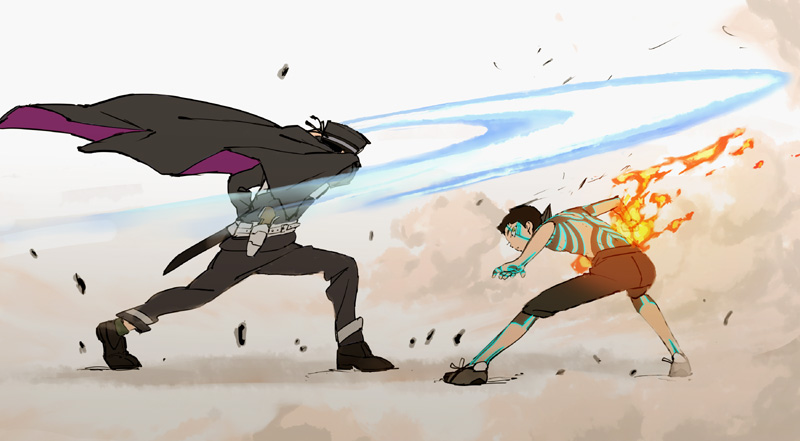 The King in Crimson
I’ve just beat Ys:Memories of Celceta. And with that I can officially say that I’ve passed the halfway mark of my playthrough of the Ys series.
Next up, Ys V, the black sheep of the franchise, and the only one to not have any kind of release in the west. Luckily translation patches are a thing.
Posted 3 months ago Report
Link Quote Reply
Interested in advertising on Derpibooru? Click here for information!