SO CLOSE YET SO FAR 🌌
NASA shared on Saturday a photo of a galaxy located in the constellation Pisces, a home to two interesting astronomical events.
“It only looks like these galaxies are colliding from a certain point of view. In reality these galaxies are millions of light-years away from each other,” NASA said.
“Because both astronomical events have predictable luminosities, they help astronomers measure how fast our universe is expanding,” NASA added. 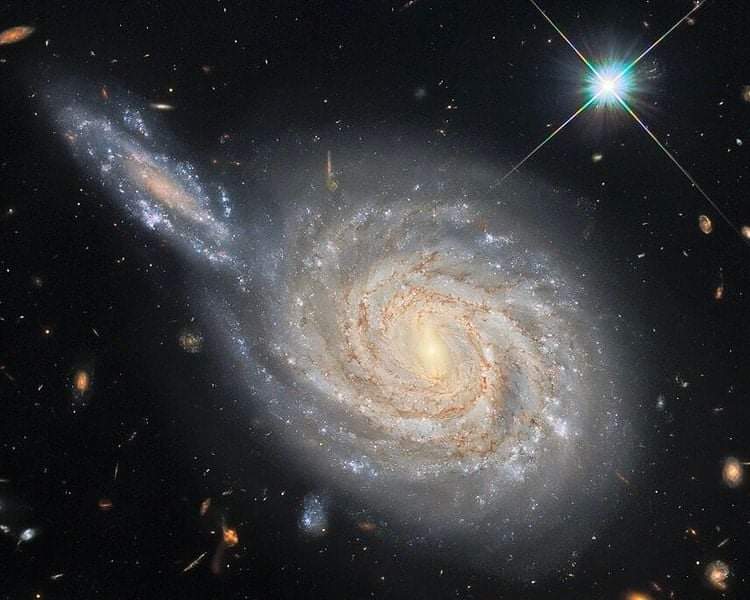 EFC Lightweight Champion
@Mellow Rhythm
Imo, from an another perspective, these two galaxies prettily looks like Milky Way and Andromeda based on their assumed size and colors.
And yes… Milky Way and Andromeda will eventually collide and merge 4.5 billion years from now and this photo is like the most perfect visualization of our galaxy’s far future.
Posted 5 months ago Report
Link Quote Reply

💙Glass Sight's Chocopon💙
@Khauntzat Adramélekhizarovich Searmaev
Thinking about the aftermath of that phenomenon is disturbing and haunting for me. Thankfully enough though, I’ll very likely not be alive by then. That is unless reincarnation hits me… then I’d rather be a particle or something at that point.
Posted 5 months ago Report
Edited 5 months ago
Link Quote Reply

EFC Lightweight Champion
@Mellow Rhythm
For me, it’ll be a spectacular spectacle of the night sky as you see these two galaxies come close and fuse into a one big galaxy. Also, all the stars in both galaxies will not collide at all because of their great distances and the movement is millions of years slow.
Earth at that timeline are no longer inhabitable anymore because of the increased luminousity of the Sun, Sooooo… assuming we have ascended into a Type I or II civilization, humanity may be living in other worlds and had adapted and evolved into a sub human-alienlike figure on those planets according to that planet’s environment.
Posted 5 months ago Report
Link Quote Reply

I II II L
That feeling when you have to miss a week of work because your mom has Covid and all the testing centers are booked up for 6 straight days.
Posted 5 months ago Report
Link Quote Reply

Offline
As Fairchild explains, 2022 is the Year of the Water Tiger, according to the ancient Chinese Zodiac — a time of renewed personal vigor, focus and physical activity — and for fun feng shui decorating considerations designed to create a peaceful home.
https://amp.detroitnews.com/amp/9082623002
Cerulean blue, fiery red, mint green and imperial yellow are the lucky colours for 2022. These colours are derived from the four elements of Feng Shui — wood (primary element of the tiger), water (element of the year 2022), fire, earth and the Yang polarity.
https://www.lifestyleasia.com/ind/culture/entertainment/lucky-colours-for-feng-shui-elements-year-of-the-water-tiger/
Posted 5 months ago Report
Link Quote Reply

EFC Lightweight Champion
Instantly terraforming Venus at the present times would only last no less a second due to the fact it’s a too close to the Sun. You will need to dim out the star so that the habitable zone would shrink down the size of Venus’ orbit.
Difficulties include the fact that the production of organic molecules from carbon dioxide requires hydrogen, which is very rare on Venus. Because Venus lacks a protective magnetosphere, the upper atmosphere is exposed to direct erosion by the solar wind and has lost most of its original hydrogen to space.
The habitable zone of the Sun is currently expanding at a rate of one meter per year because of it’s increasing luminousity. So in a billion years from now, we would eventually end up becoming Venus.
Posted 5 months ago Report
Edited 5 months ago
Link Quote Reply

EFC Lightweight Champion
I CAN’T LET YOU GET CLOSE!