Generals » Don't blame me, I voted for the other guy. (Politics General) Search Posts
Started by Archonix
Posted 5 years ago
135430 replies
Subscribe

Dogs
Another day, another report on just how involved the plot to steal the 2020 elections was. This time by the GQP reaching out to right wing media, especially Fox News, to validate their claims on Arizona election fraud. It was stated that the hosts never got back to them, but considering how Fox News was already and still are pushing any and every election conspiracy they can, it’s safe to assume they would’ve been all aboard with the idea.
Combined with the infamous powerpoint presentation where the Trump administration planned to utilize non-Fox News mainstream media and their insistance on “neutrality” to push these lies, it really doesn’t look good for how our news networks are run when their incompetence, and some cases intentional malice, was a cornerstone in a plot to overthrow our democracy.
Posted 6 months ago Report
Link Quote Reply

Somehow Omnipresent?
On the coattails a school in the great state of Tennessee banning a comic book about the Holocaust aimed at 8th graders because of “cursing”,

Groups purporting to be “grassroots” efforts have frequently led the charge, petitioning school boards or elected officials to remove certain books. Though some of these organizations present themselves as a local effort that sprang up around groups of parents united behind a cause, many of the groups involved in banning books are in fact linked, and backed by influential conservative donors.
Most of the books relate to race or gender equality, at a time when some Republicans are mounting an effort to prevent teaching on race in schools by launching a loud campaign against critical race theory, an academic discipline that examines the ways in which racism operates in US laws and society. Conservatives are a mix of delicate snowflakes that can’t stomach the idea that “their past” isn’t glorious perfection, and those terrified that the status quo they benefit from over others might be upset if people wise up to how the system has been rigged and slanted for so long.
Posted 6 months ago Report
Link Quote Reply 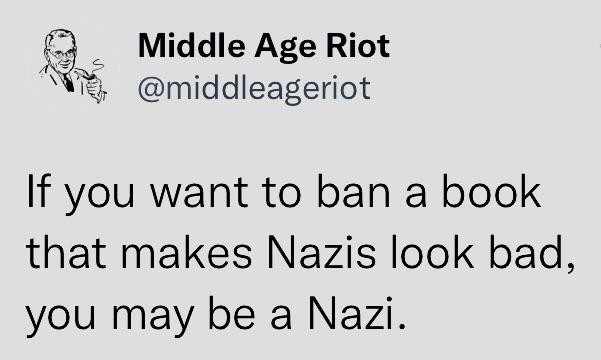 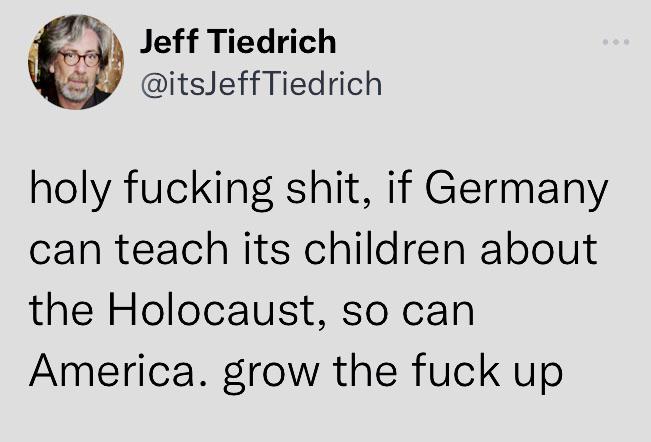 There was a third tweet I can’t find that basically says “Conservatives think their kids are strong enough to use guns but not strong enough to know why their Grandpa cosplayed as ghosts outside Halloween”.
–
Unrelated to the above, but this basically sums up the “Let’s Go Brandon!” crowd after Biden called a stupid son of a bitch a stupid son of a bitch. 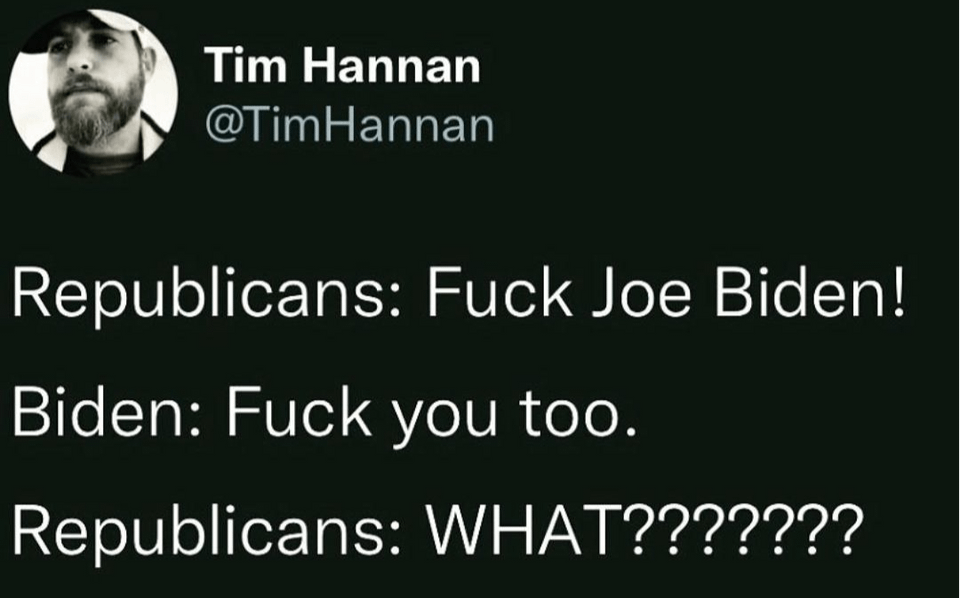 Somehow Omnipresent?
In the same vein of “America is for whites only”,

A three-judge federal panel is hearing arguments in a lawsuit claiming that Texas Republicans violated the Voting Rights Act when they redrew state Senate District 10 in Tarrant County to lessen Black and Hispanic voting power.
“Having participated in the 2011 and 2013 Senate Select Redistricting Committee proceedings, and having read the prior federal court decision regarding SD10, it was obvious to me that the renewed effort to dismantle SD 10 violated the Voting Rights Act and the U.S. Constitution,” state Sen. Kel Seliger said in a declaration signed in November. 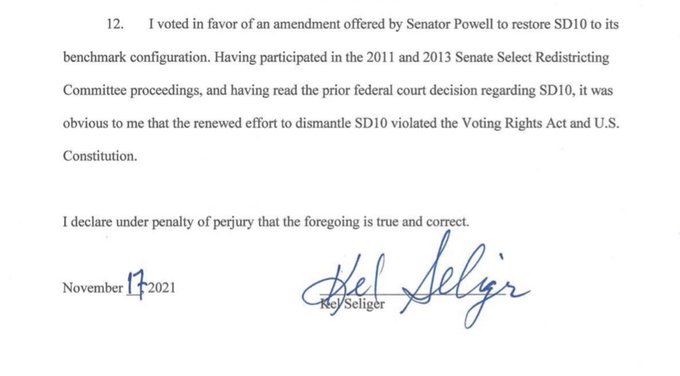 Of course, he only came forward after he decided to retire / not run for reelection. It seems to be a constant that every GOP member that “opts” to no longer run admits the party is massively fucked up and lead by utter cretins.
I can’t wait for the thread clown to completely ignore all these issues and instead have a cry about how those damn leftists have made Star Wars bad because Rey or some shit.
Posted 6 months ago Report
Link Quote Reply

Dogs
@Background Pony #1F81
“Let’s Go Brandon!” is an euphanism that literally means “Fuck Joe Biden!”
A few days ago Biden muttered under his breath “Stupid son of a bitch” towards a stupid son of a bitch during a press conference.
So naturally the “Fuck your feelings” crowd is catching a whole lotta feelings right now.
Posted 6 months ago Report
Link Quote Reply

Not anymore, 1 USD = 222.50 ARS
Funny, people voted for Alberto Fernández because a dollar was 60 ARS in 2019.
Posted 6 months ago Report
Link Quote Reply

Monado User
@Penguin Dragneel
Of course he is. They elected Trump. And Trump went off tangents for days.
Posted 6 months ago Report
Link Quote Reply
Backgroundpony

@Dustcan
@Penguin Dragneel
Good to hear all of america are the “bigger person” in the discussion. * eye roll *
Posted 6 months ago Report
Link Quote Reply

Somehow Omnipresent?
@Backgroundpony
After a year of being constantly shit on and insulted, a guy snaps back and everyone gets offended and goes “wow, so much for unity!”.
Fuck off and go cry.
Posted 6 months ago Report
Edited 6 months ago
Link Quote Reply
Backgroundpony

@The Smiling Pony
Look in the mirror after 5 years of the same shit. * eye roll *
Posted 6 months ago Report
Link Quote Reply

Dogs
Biden did immediately apologize like a day after. So like, he had a moment of getting real before reaffirming presidential decorum.
Posted 6 months ago Report
Link Quote Reply
Backgroundpony

@Dustcan
Unpopular opinion: The problem on both sides in america are not the politicans, but media and social media surrounding them.
Posted 6 months ago Report
Link Quote Reply

Dogs
@Backgroundpony
Well yes. The media is sometimes referred to as the ‘4th Branch of Government’ for a reason.
Fox News is obvious from the incestuous relationship with the GQP, but even “neutral” networks still habitually manufacture consent on behalf of the government.
Posted 6 months ago Report
Link Quote Reply

@Dustcan
Too right. Just look at the breathless coverage of a supposed “crime wave” that’s being blamed on “defunding the police.” Never mind that very few municipalities actually cut their police budgets; most simply declined to increase it, and the ones that did cut it only did so by a sliver. The perceived increase in crime has occurred in cities regardless of whether they’re run by Dems or Repubs, or increased/decreased police spending.
Of course, the media’s source for this narrative is the police themselves, whom they parrot uncritically. You know, the ones that quite like having a majority of the city budget going to them.
Posted 6 months ago Report
Link Quote Reply

Somehow Omnipresent?
@Background Pony #988B
Sarcastically because of how stupid Doocy’s “is inflation a liability?” question was.
Posted 6 months ago Report
Link Quote Reply

Tensa Zangetsu
@Backgroundpony
Can you not spout the usual Neo-Nazi rhetoric? If you were the one getting constantly s##t upon by The Racist Network, you’d react in the EXACT SAME way.
Posted 6 months ago Report
Link Quote Reply
Background Pony #648D
@silbasa
Anita Sarkeesian may have been fucking prig but that doesnt excuse the extent of channers sperging on the subject since they cant argue their positions without resorting to muddying the water with their very insular jokes that confuse the hell out of the “normies” (aka people with no time to waste on the latest itteration of wojaks), ironic racism/sexism that turns out to be post ironic aka unironic and being obsessed with Zoe Quinn (i think that’s her name) sex life. You ruined video games and gamers by yourself, not everyone think you’re an hero.
@The Smiling Pony
Now if only, IF ONLY the big media moguls were competent in their methods to introduce diversity. Sure, there are the success but the publicity hungry nature of the media push them to do drama-magnet stunts like Black Ann Boleyn and brown skinned litteraly canonically pale skinned Snow White to get dem hashtags, YouTube reviews, Twitterinos and Pepe profile pics buzzing. It’s literally trolling, i hate this era when trolling is legitimately seen as a viable marketing strategy and smug Hollwywood writers posting the ebin [preparethepopcornMinion.mp4] gif to highlight the inarticulate rage (and existence,thus putting questionnable people under the spotlight) of FuckoRandoAvocado#SJWLIVESDONTMATTER@TwitterNitwit is an acceptable PR strategy.
In other words, instead of telling NEW STORIES FROM OTHER CULTURES and making NEW IPS, they’d rather remake the same movies again and again.
TL;DR Encanto good, Hamilton shit.
Posted 6 months ago Report
Link Quote Reply
Background Pony #137C
News about tensions between Ukrainians and Russians? I sleep.
News about a kitty in the White House?
REAL SHIT!
Posted 6 months ago Report
Link Quote Reply
Backgroundpony

@Penguin Dragneel
Well I get your shit so you are right about that.
Posted 6 months ago Report
Link Quote Reply

@Dustcan
Didn’t he also say that inflation is a great asset?

The White House keeps all transcripts by the pres or VP.

So, anyway, Brian, the floor is yours.
MR. DEESE: Thank you, sir. We’re going go and give the press corps a moment to exit, and then we’re going to start our meeting.
Q Mr. President, can you give us a brief update on your call with European leaders on what’s happening in Ukraine today?
THE PRESIDENT: The only reason I don’t like doing this is you never report on why I’ve called a meeting. And this is really important.
I had a very, very, very good meeting. Total unanimity with all the European leaders. We’ll talk about it later.
Thank you.
MR. DEESE: Thank you.
Q Will you send troops to Ukraine, sir?
Q Why are you sending 8,500 troops to Ukraine, possibly?
Q Will you take questions on inflation then? Do you think inflation is a political liability ahead of the midterms?
THE PRESIDENT: No, it’s a great asset. More inflation. What a stupid son of a bitch.