Generals » Don't blame me, I voted for the other guy. (Politics General) Search Posts
Started by Archonix
Posted 4 years ago
133450 replies
Subscribe

@Jojodidu
They’re getting close if they ain’t there already.
I wish this was me just being a blowhard as usual, but more and more documentation keeps coming out about more and more of Fox News’ complicity in the Jan 6 insurrection.
That wasn’t very cash money of Biden, but that Fox News representative wasn’t there for questions but to get a soundbite so the rest of the network can smear Biden with.
Posted 5 months ago Report
Link Quote Reply
Background Pony #5A3A
@The Smiling Pony

@Jojodidu
Every other (not an exaggeration) press conference Trump held included him insulting journalists and/or the publications they worked for.

Jimmy Kimmel isn’t someone I usually watch, but he recently did a bit relevant to your point about how terrible Trump’s interaction with the press was.
Posted 5 months ago Report
Link Quote Reply

Jojodidu
🇦🇷
@Dustcan
I knew it, every channel is like that here
C5N is probably the most hated. They like the government, Venezuela, Cuba, Nicaragua and other countries like those. Btw they talk bad about Macri all the day.
La Nación + is the opposite, it’s said that it’s financied by the Republican Proposal, they talk trash about the government. Unlike C5N they don’t like some “extremists” like Bolsonaro.
Posted 5 months ago Report
Link Quote Reply
Background Pony #EF3F
@Ereiam
Since when did “a day and-a-half-late” count as being out of touch or not in tune with everything else that’s going on?
Until now, I have never heard anyone in this thread complain or disparagingly remark with such incredulous dismissal that someone who had no idea that (apparently) being a single 24-and-half hours behind the “news cycle” of this thread is somehow committing the politically-centric topical equivalent of unironically reviving a dead meme, less than two months after it lost its popularity and its initial heyday of topical relevance, by bringing up the aformentioned political topic less than two days after its very first day of gaining notable publicity, and it really seems like the only reason why you’re responding in this manner is because you have nothing else to say that is critical of my post that can counteract it in an a process of execution that can, alone, convince others that you’re somehow more favorable of having your stance be taken seriously, all for the sake of being contrarian to rational assessments of certain topics (like mine of the admittedly-insipid-as-can-be M&M one, that you replied to) that happen to not fall in line with your overly-rigidly-concived ideological worldview.
I will give you this, though: the arguments and the philosophical rationale behind what is clearly your carefully-assessed and considered rebuttals that you’re using to dismiss and downplay actual, legitimate points and principles made by others that you don’t automatically, necessarily agree with have gotten notably more imaginative, this time around: I certainly didn’t expect you have this particular trump card of convenient dissmissal up your sleeve.
Posted 5 months ago Report
Link Quote Reply

Monde de merde
@Background Pony #EF3F
How long does it take you to type those long-winded rants in block of text format again? Because once more, the thread has moved on and nobody cares (judging by the three other people who deigned giving you a reply after mine) about that dumb controversy or your personal attacks, least of all me.
As it is, the current topic of discussion is Fox News losing their shit about the journalist Biden insulted, as if Trump didn’t spend his entire presidency doing the same (and didn’t I tell you about manufactured outrage?)
See? It took me all of five minutes to tell you that (and maybe three more to edit it). It is said brevity is the soul of wit, perhaps you’d be better served using some in the future.
Posted 5 months ago Report
Edited 5 months ago because: Shakespeare is always relevant
Link Quote Reply

Part-time Pizza Cat
Fun fact, the Green M&M used to be a male.
So, all these folk losing their shit have been tugging one out to a trans candy.
Posted 5 months ago Report
Link Quote Reply 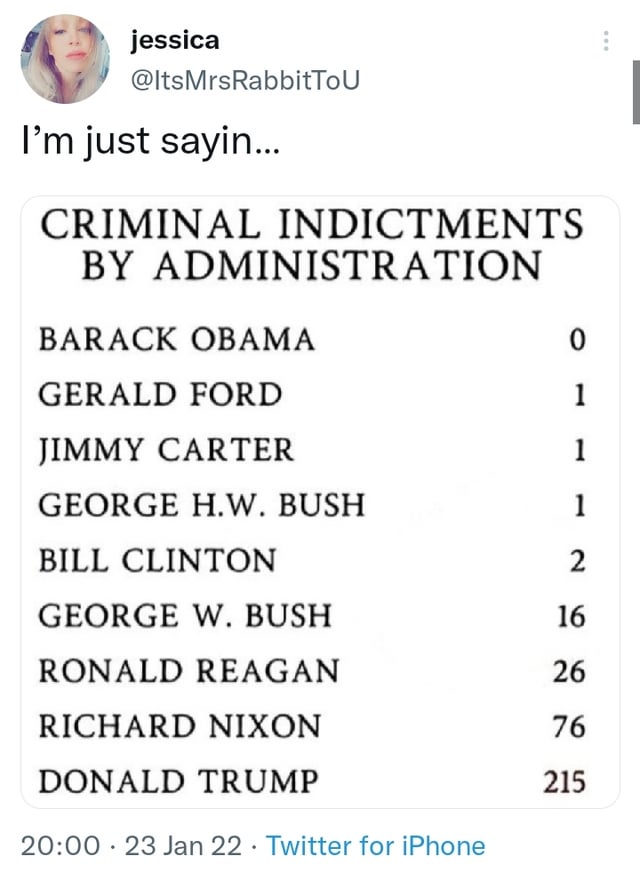 I went and checked the validity of this, and it turns out it’s exagerated. But not my much.

A Facebook post said that there have been 317 criminal indictments under three recent Republican presidents and only three under three recent Democratic presidents.
The claim is essentially on target for the Democratic presidents, but the comparison to the GOP presidents is overstated, because the numbers of Trump and Nixon administration indictments claimed are greatly exaggerated.
Even so, with a generous count, there were roughly 142 people indicted in the three GOP presidents — far less than 317, but far more than the two under the Democrats.

Mull on that the next time you hear about “Law and Order”.
Posted 5 months ago Report
Link Quote Reply

CHS, Class of 20XX
@Dustcan
I would have expected more out of the Clinton gang. All those investigations and they only found a few civil complaints?
Posted 5 months ago Report
Link Quote Reply

Part-time Pizza Cat
Some rando tossed around threats at a VA Senate meeting because a bill protecting doctors that prescribed covid “cures” failed.
These “cures” of course include the anti-parasitic drugs Ivermectin and Hydroxychloroquine, as well as the new fancy kid on the block Topomax, an antiepileptic that’s also used to treat bipolar disorder and schizophrenia.
None of these drugs treat covid in any way. But, given the mental state of most covidiots, maybe they should start taking more drugs that treat psychiatric disorders.
Posted 5 months ago Report
Link Quote Reply

Even in Hitler Germany, you could, you could cross the Alps into Switzerland. You could hide in an attic, like Anne Frank did. […] I visited, in 1962, East Germany with my father and met people who had climbed the wall and escaped, so it was possible. Many died, true, but it was possible.

@The Smiling Pony
Reminds of when Marjorie Taylor Greene spent a month saying anyone and anything left of her (so…everyone and everything) was a Nazi and conservatives in America are living in the Holocaust.
Then she took a trip to a Holocaust museum and suddenly was tweeting about how ‘Wow did you know the Holocaust was bad!?’…for about a week. Then she was back to making antisemitic references.
Frankly I’m not too sure Qaren’s trip to the museum didn’t look like Cartman’s trip through the Tunnel of Prejudice.
At any rate this is more DARVO from the GQP. They’re really leaning into their fascism fascination over the last few years, so of course the (increasingly accurate) comparisons to Nazis have increased as well. So they’re just shouting “No, U!”
Posted 5 months ago Report
Link Quote Reply

Part-time Pizza Cat
A far right mega pastor declared that God has appointed Trump as “president of earth” and a prophet.
You know, I’m not remotely Christian, but this really is starting to sound like antichrist level shit.
Posted 5 months ago Report
Link Quote Reply

A group of healthcare workers switched jobs for a better career at a different hospital. In response their old hospital straight up sued them to prevent from leaving their old jobs. Said restraining order has been “temporarily” lifted, so they are allowed to work at their new jobs while the courts battle this out.
We never moved away from serfdom.
Posted 5 months ago Report
Link Quote Reply

Monado User
@Zincy
Okay that’s not what it says in the bible.
Posted 5 months ago Report
Link Quote Reply

Stand with Ukraine
@Zincy
I feel like Christianity was a mistake.
Posted 5 months ago Report
Link Quote Reply

Part-time Pizza Cat
@igotnopicks
A charismatic false prophet who will come under the guise of righteousness but will actually represent greed, war, and pestilence. Who will fleece large portions of the population into believing he is of divine provenance. A stark capitalist who will have their followers wear marks upon their foreheads.
Pretty sure that’s exactly what the Bible says.
Posted 5 months ago Report
Link Quote Reply

Tensa Zangetsu 🌈
@Zincy
I’m from a Christian family, so I can confirm that it very much IS some antichrist s##t.
Posted 5 months ago Report
Link Quote Reply

@igotnopicks
What does it matter anyway? They sure as hell don’t follow the bible even though they like to say they do.
Posted 5 months ago Report
Link Quote Reply