Generals » Don't blame me, I voted for the other guy. (Politics General) Search Posts
Started by Archonix
Posted 5 years ago
137956 replies
Subscribe

Dogs
@Anoncrsh
Ja. Jesse Dollemore lays it out better than I, but Owens’ entire shtick is proudly being the “I have a black best friend” of the Republican party.
@CaptainXtra
@Anoncrsh
She’s not. She’s a grifter and a liar. She ran on one of the most progressive platforms this side of Bernie; M4A, $15 minimum wage, no lobbying money, etc. up to and including the elimination of the same filibuster she’s stanning hard for now.
Then she gets elected and does a 180 on all of them. She’s now one of the most “moderate” (re:sides with the Reps more than Dems) Democrats in the Senate. Now her only “belief” is whatever her donors pay her the most for.
Posted 8 months ago Report
Link Quote Reply

Monado User
Ted Cruz is against stock trading for Congress.
Well this is a first for Ted Cruz, it’s too bad it’s TED CRUZ!!! So it’s best not to trust a spineless jellyfish like Ted Cruz.
Posted 8 months ago Report
Link Quote Reply

#WaifuLivesMatter
I hate being black in this country. Ignorance and conformity is why I’m considered an “oreo” because of my shortcomings.
Posted 8 months ago Report
Link Quote Reply

Anoncrsh
@Dustcan
Oh was it that one chick that celebrated on the 15$m
?

Dogs
Old video of Rand Paul telling college students back in 2013 to “spread misinformation” to sabotage peers.
It’s not even clear if the semester graded on a curve, so there wouldn’t even be a benefit to ruining your classmate’s grades.
But frankly that clip alone is a microcosm of Rand Paul himself. It really explains a lot of his senatorial career. “I can’t make the cut, but if everyone else looks bad then I look better by comparison! Even if I have to bring them down to my level myself.”
If nothing else, we can see he’s always been a big fan of profiting off of misinformation, and not just literally as is the case with his lies towards Fauci.
Posted 8 months ago Report
Link Quote Reply
Background Pony #1F81
QAnon supporters are announcing that they will be attending Trump’s upcoming rally along with the Arizona Rep (also a QAnon supporter) and the MyPillow guy. They also believe that JRK and his son will also make an apperaned, along with several dead msicians like Tupca, Prince, Michael Jackson and John Lennon
im not up to date on the current QAnon lore but is there a reason for their sudden hyper fixation on the Kennedy family and why they think he’s gonna reveal that he and his family were just faking their deaths?
Posted 8 months ago Report
Link Quote Reply

“ShimSham my GlimGlams”
@Dustcan
Folks are saying it was an obvious joke that libs are too stupid to get. Only joke I can see is that someone high up in US government is shamelessly admitting to being a sociopath instead of trying to make himself look good to his audience. It’s so out of sync with the idea of people painting themselves in the best light. Or, better yet, that he’s telling the truth for once in his worthless life.
Posted 8 months ago Report
Edited 8 months ago
Link Quote Reply

@Dustcan
Folks are saying it was an obvious joke that libs are too stupid to get.

Well they’re not wrong.
Jokes that aren’t funny are definitely some 5d chess or something.
Posted 8 months ago Report
Link Quote Reply

Chaotic Evil
I find it funny how the GQP in my state (Indiana) try to think that CRT and 2020 Presidential Election Results seems to more important than the 271 homicides my state experienced last year.
Posted 8 months ago Report
Link Quote Reply

QAnon supporters are announcing that they will be attending Trump’s upcoming rally along with the Arizona Rep (also a QAnon supporter) and the MyPillow guy. They also believe that JRK and his son will also make an apperaned, along with several dead msicians like Tupca, Prince, Michael Jackson and John Lennon
im not up to date on the current QAnon lore but is there a reason for their sudden hyper fixation on the Kennedy family and why they think he’s gonna reveal that he and his family were just faking their deaths?

Never mind that, when in the name of all that’s holy did QAnoners turn into fans of a black gangsta rapper who was convicted of rape? Do they expect him to be in chains or something? When I was growing up, Tupac was a Republican Satan.
Posted 8 months ago Report
Link Quote Reply

U mad?
@HeadlessHorselessHorseman
It was thought the Illuminati killed him for coming out against them, so it wouldn’t surprise me if that has something to do with it.
Edit: Got an email from Gab about the Washington Post contacting them for an article they’re doing. Here’s what the WP sent Andrew: (I hate the new quoting system on here)

Hi Andrew,
We’re working on a story about how pro-Trump and conservative commentators, influencers and content creators have seen their audiences change on Gab, Gettr, Rumble and Telegram over the last year. We analyzed the data for 47 accounts on those sites and found that, for the most part, everyone saw a big jump in followers or subscribers when Trump was banned from the mainstream sites after Jan. 6; the accounts’ follower growth dramatically stalled and plateaued over the rest of the year; and the few big follower jumps we’ve seen in recent months have mostly come as a response to the bans of high-profile conservatives like Rep. Marjorie Taylor Greene on Twitter and Facebook.
The sites themselves do appear to be growing, but some of the more prominent pro-Trump figures were analyzed have seen their growth rates become very slow or even decline.

For Gab specifically, Alex Jones, who joined in 2016, went from gaining roughly 25,000 followers a month in the first quarter of 2021 to about 1,000 followers a month for the rest of the year, the data show. The Gab follower counts for some prominent QAnon promoters have also grown by 1 percent or less per month since last spring.
Have you seen that trend? What do you think explains it?
Does this call into question the ability of alt-tech sites to be able to build an audience or a business long-term – and if not, why?

Some experts told us that these platforms focused on conservative politics are naturally limited in their appeal. There’s also a good amount of competition among them, and they’re in conflict with some giant, years-old platforms where many users already have established accounts and relationships. Any thoughts on those arguments?
I’m also planning to include your comments about Gettr (“The Regime is in panic mode. So out comes Grifter to distract the masses.”). Anything you can elaborate on? Why do you think Gettr is a grift, and is the same true about “TRUTH Social”? I know you’ve spoken about this elsewhere, but I’d appreciate anything you can tell me here or link me to.
Any other responses or context we should note?

I can and will send my response to you out with one click right now and get more traffic than your article will before it is even published.
Your outlet is 144 years old. I founded Gab 5 years ago and run it from my basement in the middle of the woods.
Gab now has well over 50 candidates in the 2022 election using the platform along with multiple members of Congress and the biggest dissident voices on the internet all in one spot. We have medical doctors, nurses, and hundreds of thousands of people who do not support nor want to inject themselves with an experimental vaccine joining our platform. These people are from all different political backgrounds, beliefs, and creeds.
The growth and engagement of one small subset of 47 commentators is irrelevant to Gab’s growth overall as a free speech platform for all people. If you want my personal opinion as to why pro-Trump commentators aren’t growing as fast on alt-tech platforms it’s really very simple. President Trump has turned into a vaccine salesman which is a total and complete disconnect with the overwhelming vast majority of his voting base. I say this as someone who voted for him twice.
His non-stop vaccine shilling has turned many of his supporters off completely. You can see this plainly in the comment section of the statements that are published to his reserved Gab account. As a Regime propaganda outlet I understand that you are trying to craft a narrative that alt-tech is shrinking and doomed because pro-Trump commentators are shrinking, but the numbers and reality show a much different situation here.
People aren’t and never were coming to Gab for an online Trump rally.
People are coming to Gab for the Truth and to speak freely.

Confirmed. Trump is losing his followers because they view him as a vaccine shill now. I think that will hurt his chances of reelection. And Torba was doing his best to get Trump to come over to Gab (the account that’s there is just a relay account).
Posted 8 months ago Report
Edited 8 months ago
Link Quote Reply

Dogs
Whoever hosts the twitter account for the US Consumer Product Safety Commision is having too much fun.
–
DirectTV have dropped OANN from their services. That’s nice.
– 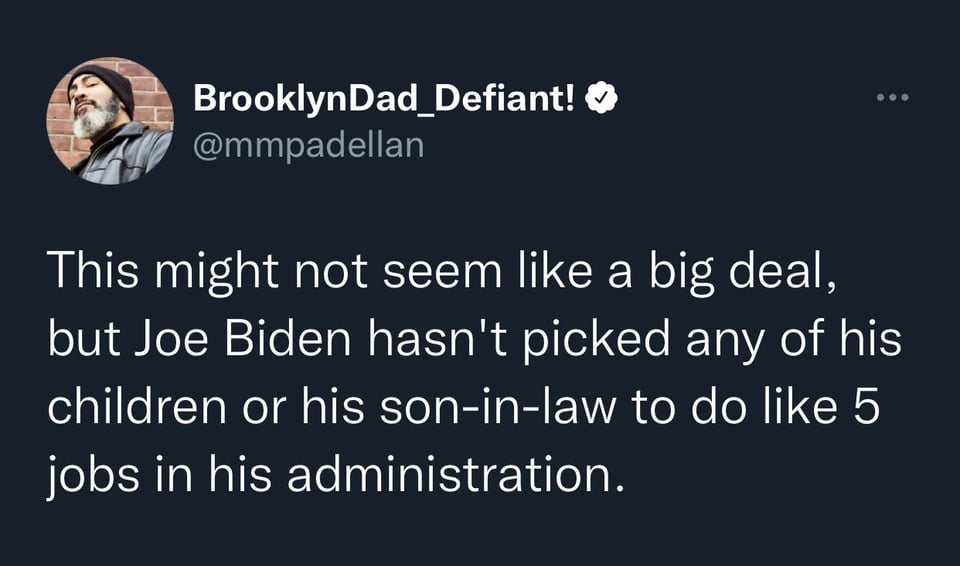 Confirmed. Trump is losing his followers because they view him as a vaccine shill now. I think that will hurt his chances of reelection. And Torba was doing his best to get Trump to come over to Gab (the account that’s there is just a relay account).

There’s an old quote from Rep. Thomas Massie (R-KY) that comes to mind. He was surprised that people who had voted for libertarians like himself, Ron Paul, and Rand Paul were so quick to support the decidedly non-libertarian Donald Trump. Then it hit him…

@Background Human
the problem with extremists is they aren’t reasonable, it’s why the dems refuse to cater to the extreme left they know full well how quickly they will be turned on the second they don’t tow the line,
Posted 8 months ago Report
Link Quote Reply

Dogs
@Thanotos Omega
I wish. But the center-left Democrats sure ain’t catering to anyone left of them.
Sure have no problem making goo-goo eyes to their right though.
Posted 8 months ago Report
Link Quote Reply

CaptainXtra
PUNCH A FASCIST!
I’m hearing that China is closing down it’s ports due to omicron concerns.
Well then, let’s see how big corporations around the world react to this.
I’m still pondering how the fuck North Korea hasn’t collapsed yet, citizens that are already treated like slaves beforehand should be dropping like flies in this pandemic which would in turn reduce the amount of new soldiers to enlist.
Posted 8 months ago Report
Edited 8 months ago
Link Quote Reply

Dogs
@CaptainXtra
“Benefit” of being a Hermit Kingdom: if nobody is allowed in the country, then pandemic diseases can’t get in either. That, and I doubt anyone with Covid lasts long…
–
Mike Lindell of MyPillow fame is having another bad day. His banks are closing his accounts due to him being a “reputation risk” and he’s got only 30 days to empty his savings before they shut him off from it entirely.
I know Trump’s Faithful wants to emulate him, but while that’s a bad idea in general there are some things that you really shouldn’t replicate about him.
Posted 8 months ago Report
Link Quote Reply
Interested in advertising on Derpibooru? Click here for information!