Generals » Don't blame me, I voted for the other guy. (Politics General) Search Posts
Started by Archonix
Posted 4 years ago
130553 replies
Subscribe

CaptainXtra
KILL THE EARN IT ACT!
@Flutter_Lover
We’d have to assassinate several other world leaders too so that everyone will be confused as to who did it.
WW3 will at the very least be delayed in that situation.
Posted 4 months ago Report
Edited 4 months ago
Link Quote Reply
Background Pony #EF3F
@Penguin Dragneel

Getting some alt-right vibes from this.

By recognizing the potential problems that could potentially exist—and believe me, there really have been instances in so-called “diversity training” programs—just read up on Disney’s aborted “CRT” project, Seattle’s POC only training sessions and/or safe spaces (I forgot the actual name of the program, yet it really was an actual, explicit and deliberate revival of Jim Crow segregation—only this time, with a borderline-fanatically ‘woke’ twist—an instance of such that unquestionably is a thousand-fold more akin to actual Jim Crow policy than the rather sketchy in the abstract-looking voter ID laws that the Republican party has been trying to pass—in their current form, at least—is or possibly will ultimately be, just by looking at the two of them on the surface, alone), and a literal “(insert race here) only” event held by a Denver county elementary school (in this case, it was an all-POC event that while it did not explicitly exclude whites, it still is explicity race-based and its promotion by a publicly-owned and funded institution still reeks of segregational undertones)—that this legislation may possibly be trying to address (albeit not in any decently thought-out, considered, transparent and clarified way that should warrant the bill—as it currently appears to look like, so far, to me—any deserved or reasonably-argued chance), you’d actually be surprised at how much you would be able to understand this situation fully without feeling like it somehow gives off alt-right vibes.
(My apologies if this looks too complicated to digest, yet this really was the best I was able to do in trying to convey my response—alongside my thoughts and inquiries on this matter—in the shortest way possible without sacrificing any useful and necessary clarity to avoid giving anyone reading this the wrong impression about where I stand on this issue.)
Posted 4 months ago Report
Link Quote Reply

Manually Breathing
@Background Pony #EF3F
Your post isn’t “complicated to digest”, it’s horrifically formatted.
Regardless, no matter how hard someone may try to interpret the law as something benign, the reason for its existence and its intent for application is clear: whitewash history by scaring people, and educators in particular, from talking about any of the several race-based atrocities the US committed in the past or how those still have an effect in the present.
As far as Republicans are concerned, the US already solved the “problem” of “racism” decades ago and bringing it up now is just sectarian anti-white racism.
Posted 4 months ago Report
Link Quote Reply

Part-time Pizza Cat
The Supreme Court has ruled that the house Jan 6th committee can get access to the more than 700 documents that Trump and his cronies were trying to keep hidden.
This means that there is very little that Trump can do to stop the transfer, which could happen by weeks end.
Every little dirty detail about Jan 6 and Trump’s attempt to steal the election.
Posted 4 months ago Report
Link Quote Reply
Background Pony #1F81
Mike Lindell, aka the MyPillow guy, is hiring a former Newsmax broadcaster to join his new streaming platform. Said broadcaster was recently fired becuase she said that the COVID vaccines are apparently infused with SATAN and are being used to track people down.
When even Newsmax think you’re crazy, that really says something.
Posted 4 months ago Report
Link Quote Reply

@Zincy
It’s only taken about a year to get to this point.
Posted 4 months ago Report
Link Quote Reply

Monde de merde
@Zincy
Speaking of Trump, the other day, NY attorney general Letitia James announced her investigation has uncovered significant evidence of fraudulent practices from him and his organization and now wants to question Donald Jr. and Ivanka.
Looks like the noose is tightening…
Posted 4 months ago Report
Link Quote Reply

The Supreme Court has ruled that the house Jan 6th committee can get access to the more than 700 documents that Trump and his cronies were trying to keep hidden.
This means that there is very little that Trump can do to stop the transfer, which could happen by weeks end.
Every little dirty detail about Jan 6 and Trump’s attempt to steal the election.

Trump’s in for A BAD TIME alright… 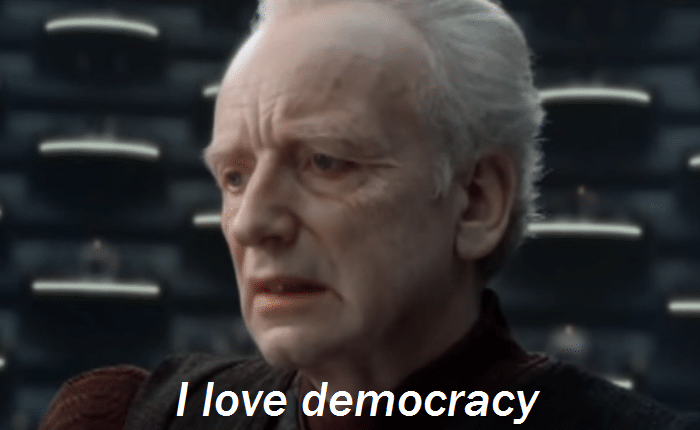 I hate to be That Guy, but I’ll believe it when he’s actually in court. Not settling out of court, shoot regardless of the actual verdict. But I’ll believe there’s consequences when he’s standing in front of and lying to a judge’s face.
He’s been known to engage in fraud for decades. Nothing happened. We watched as he spent his entire presidency - 4 straight years - committing crime after crime brazenly and openly, and nothing. Watched as he confessed to each of them! And nothing.
I’ve gotten tired of getting my hopes up with him.
Posted 4 months ago Report
Link Quote Reply

I posted this yesterday but now it’s outdated.
Kirchnerism took the dollar from 46 ARS to 212 ARS in 2 years of government. The worst government in Argentine history.
Posted 4 months ago Report
Link Quote Reply

Manually Breathing
@Dustcan
Yeah, it’s unrealistic to expect Trump will ever be held accountable for anything. Even if somehow “the system works”, ultimately someone will go “we need to let the nation heal” and let him off with some stern words directed at no one.
Posted 4 months ago Report
Link Quote Reply

The Senate just had a vote to alter the filibuster. Nothing big, just changing it back to an actual talking filibuster instead of the current absurdity where any random Senator can just throw their arms up and shout “FILIBUSTER!” to force a 60+ vote.
It failed after all 52 Republicans unsurprisingly voted to keep the thing that disproportionately empowers the minority party.
–
As the mask further slips off, Moscow Mitch makes a distinction between African American and…Americans.
Posted 4 months ago Report
Edited 4 months ago
Link Quote Reply

#WaifuLivesMatter
I miss Trump only for the memes.
Posted 4 months ago Report
Link Quote Reply

Part-time Pizza Cat
The party of small government sure does like to wield the power of government like a hammer.
Posted 4 months ago Report
Link Quote Reply

Eric Trump, one of the idiot sons of the idiot former president, was in a hearing over his crime family’s businesses. Across the 6 hour long hearing he invoked the 5th over 500 times.
That comes out to about 1.33 invocations a minute.
I’m reminded of 2 things: one, his father famously and proudly declaring “What do you have to hide!?” to anyone who takes the 5th, and how the 1 of the 10 or so Benghazi investigations that lasted 11 hours Hillary never invoked the 5th once.
Posted 4 months ago Report
Link Quote Reply
Background Pony #1F81
@Dustcan
Invoking the 5th?
Posted 4 months ago Report
Link Quote Reply

Zamasu
@Background Pony #1F81
Refusing to testify against yourself per the 5th amendment to the US Constitution. A.k.a. your right to remain silent.
Posted 4 months ago Report
Edited 4 months ago
Link Quote Reply

CHS, Class of 20XX
@Dustcan
Generally speaking, once you start pleading the Fif, you don’t want to stop. If you pick and choose which questions to answer, a judge can take that as a waiver of your 5th Amendment rights and compel you to answer other questions on the same subject.
I’M ERIC! is guilty as hell, but even obvious criminals have rights.
Posted 4 months ago Report
Link Quote Reply

“ShimSham my GlimGlams”
@Zincy
I’m curious: smaller government would have a harder time abusing its power over citizens, in theory, but would a smaller government be easier to abuse by those with more money, or at least leave the monied with proportionally increased power?
Posted 4 months ago Report
Link Quote Reply

@Vivace
Something striking about “small government advocates” is how they tell on themselves even when using their most basic talking points. Most will tell you that the only legitimate government services are the military, police, and courts. If you look at some of the worst dictatorships past or present, however, you’ll find that’s what most of them focus their budgets on. That’s because military, police, and a (rigged) court system are all a competent dictator needs to commit tyranny.
Meanwhile, those knuckleheads are out there decrying mass transit and healthcare that doesn’t bankrupt most people a threat to their “freedom.”
Posted 4 months ago Report
Link Quote Reply

“ShimSham my GlimGlams”
@BlitztheDragon
They also twist the visions of the Founding Fathers to make them out to have been equally ardent small government types, despite leading FF Tommy J doing little to shrink government during his presidency and, in fact, taking executive action he told himself was unconstitutional.
Speaking of freedom, I’ve seen one declare it good that California mental health facilities were defunded to the point of many shutting down in the 1970s on the basis that being cast out into the public as if they were used to living like the rest of the population promotes freedom and not being bound by authority. More so than the basis of facilities possibly having low-quality living conditions.
Posted 4 months ago Report
Link Quote Reply

@Vivace
It’s true that living conditions in most mental asylums were horrible, and a new model was definitely needed. The problem is that the replacement of community-based care never materialized, due to it being declared through unfunded mandates, and blocked by rampant NIMBYism and general stigma toward mental illness. As a result, in most places that deinstitutionalized, the prison system picked up where the asylum system left off.
Back to the Founding Fathers, however, since you brought up Thomas Jefferson. I thought I might add that the FFs also directly refuted another cherished talking point of the “small government” right: That the Second Amendment enshrines a constitutional right to overthrow the government when it does something we don’t like. President George Washington himself settled that matter in a rather deadly way when he sent an army to put down the Whiskey Rebellion in 1794.
(As an aside, while I do not believe that the Second Amendment grants a constitutional right to overthrow the government, I would argue that the spirit of the Declaration of Independence suggests a moral right to do so.)
Posted 4 months ago Report
Edited 4 months ago because: Added one more thought to my first paragraph.
Link Quote Reply
Interested in advertising on Derpibooru? Click here for information!