Generals » Don't blame me, I voted for the other guy. (Politics General) Search Posts
Started by Archonix
Posted 4 years ago
120480 replies
Subscribe

Monde de merde
@Zincy
Democracy’s breaking down. I fear that if the people in charge keep half-assing (at best) their job of safeguarding it, the use of force against both those who seek to overthrow it and those who’re weakening it for their own personal gain will someday be inevitable.
Posted 2 months ago Report
Link Quote Reply

Gallusposting since 2019
I noticed a lot of US conservatives calling the Jan 6 rioters “political prisoners”, demanding their release. What do they think the Jan 6 riot was - a protest, a holiday, or what? They seem to deny the rioters’ attempts to kill the government leaders.

Patriot Takes on Twitter has examples of this militant attitude. Where is the link to that poll?
Posted 2 months ago Report
Link Quote Reply

@Zincy
So they want a Jihad, then. That’s cool.

Call the local mosques. Chances are they got a coupla guys for hire.

As the Fremens of Arakis would say: Ya haya chouhada
Posted 2 months ago Report
Link Quote Reply

No thanks to these blokes who wanted to use it to punish anyone who isn’t them. Jim Crow, misogyny, abuse, torture of children, added with hero worship of some orange man and Q.
Posted 2 months ago Report
Link Quote Reply

Relatedly, in the middle of fearmongering about Biden sending some kind of vaccination secret police going door to door, Qaren also made a point to remind people about ‘their Second Amendment rights’.

This isn’t the first time “Second Amendment rights” was code for shooting police. The Alt-Reich really will turn anything into a dogwhistle.
Posted 2 months ago Report
Link Quote Reply

The lives for the Boys in Blue mattered when they worked for the RED team.
Now that they work for BLU, it seems that they can be shot on sight.
Posted 2 months ago Report
Link Quote Reply

Zamasu
@Zincy
$100 says that they might want to implement “The Purge.”
Posted 2 months ago Report
Link Quote Reply

Gallusposting since 2019
It appears that the QAnons are starting to become more desperate. Here is a post by the notorious Gab personality, “Artraven”, displayed on Twitter : 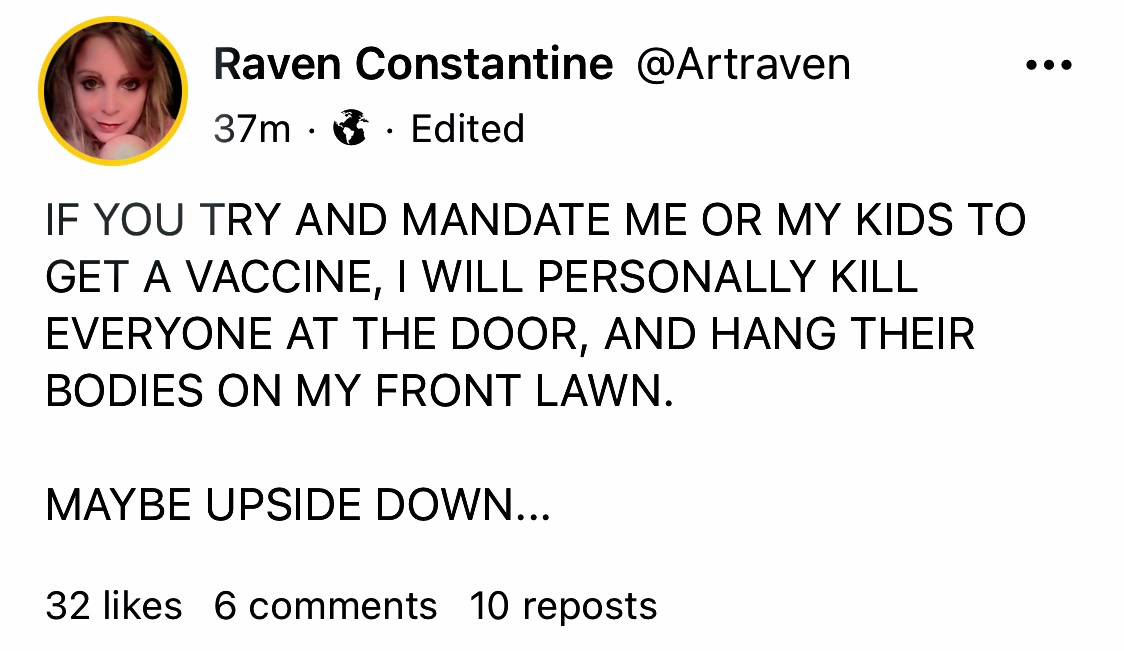 This one said that she will kill anyone who tries to get her and her kids vaccinated against the virus. Adding to their belief that “vaccinations kill”.

These people are so out of their minds. I hope to Shiva her neighbours better stop her before she starts murdering them.
Posted 2 months ago Report
Edited 2 months ago
Link Quote Reply

I’d not shed a tear if she was hit and killed by a truck.

In fact, I’d bail out the driver.

@HorsesandMuchMOAR
seems interesting.
anybody who just want an excuse to beat someone up could try and knock on these Qarens’ door and ask them to vaccinate.

They’ll most likely try to kill you, so now you got an excuse to fight back in self defense. So if you’ve got a hankering to try out that new technique you learned in the Dojo and has been practicing for weeks, on a civilian, without having to start a bar fight, then these women are a good option.

Also don’t give me the “you promoting violence against women?” bull. Them hands are rated E for Equality of gender.
Posted 2 months ago Report
Link Quote Reply

**Canada has learned nothing from Bill-C10 and is just doubling down on the fucking bad ideas. **

That is what I also hope the neighbours should be doing, to protect themselves from her – she might even try to kill them next if they might ask her to get vaccinated. If QAnon were an army, she might be one of its fiercest warriors.

This attitude is why Americans call people like her “Tealiban” (Tea Party Taliban) or “Y’all Qaeda”: if they took power, they might violently purge anyone who doesn’t follow their views and leave behind a murderous, backwards dictatorship. Together with the crazy beliefs of the QAnons, QAnonistan might become like medieval Europe, steeped in superstition.
Posted 2 months ago Report
Edited 2 months ago
Link Quote Reply
Backgroundpony
The promotion of violence against your political oposition still goes strong in america.
Posted 2 months ago Report
Link Quote Reply

I agree. The US needs better education and mental counselling – already people are picking more radical and militant views. It could be politicians, abuses by the police, and corporations that led to this mess.

Even if it’s just Twitter bubbles (QAnons, tankies, anarchists and communists, White supremacists and alt-righters/trads), they make the US look more dangerous and untrustworthy.

On Vacation
@CaptainXtra
If you posted here any of the things the actual act seeks to respond to we would not only delete the post and ban you, but we would probably report you to your ISP as well as InterPOL, so I’m really curious why you are so opposed to the proposed act?
Posted 2 months ago Report
Link Quote Reply

Part-time Pizza Cat
Millions of Americans are facing eviction when the moratorium ends, and yet Scar Jo can whine and bitch about only making 20million on a movie and people will defend her narrow ass.
Posted 2 months ago Report
Link Quote Reply

@Ciaran
IMO you would delete the post and ban him due to the rules of conduct that the website has expects from its users and moderated by ppl like you. The implication: Derpibooru sets the rules, NOT Canada. Mayhaps other booru has different rules entirely.

What I infer from your argument is that “well, since everyone everywhere knows XYZ will get you banned practically from any major website and since everyone is already behaving in a certain way then what’s the harm in making it official? “

An analogy would be “You guys live together, have sex regularly, already has kids, and plan to stick with each other till death do you part. So why not just marry and make it official?”_ Well, some ppl would like the OPTION to bail out open for them.

Similarly ppl maybe would like the option to shitpost and gorepost and generally be an absolute fecking idiot available for them, should they want to.

I think it’s a case of people not wanting to be told what to do, even if they’re already doing it.

@Zincy
Blot Twist: She wants more money so she can give more money to combat evictions and help pay off crippling debts.
Posted 2 months ago Report
Link Quote Reply

On Vacation
@tehwatever
My “argument” is I’m asking what their problem (and now I guess what your problem) is with Canada codifying their existing laws about child pornography and terroristic acts and making sure that they actually are funding watching for those things within their country.

Similarly ppl maybe would like the option to shitpost and gorepost and generally be an absolute fecking idiot available for them, should they want to.

Yeah, we have people here who do that. They shitpost IRL child pornography because for some reason it’s fun for them. When we report those people to their local authorities, shouldn’t the local authorities be able to consider their posts when investigating whether it was a crime committed by one of their own residents?

Part-time Pizza Cat
Dah big manly men seem to be so easily triggered by some fabric and a wee needle.

In other news, some reps are wearing bracelets celebrating that dumb bitch that got a face full of lead at the Capitol.
Posted 2 months ago Report
Link Quote Reply

Representative Mo Brooks just implicated himself for Y’all Qaeda’s Jan 6 Jihad. He admitted that while he was riling them up during Trump’s rally the morning before he was wearing body armor because he was ‘concerned’ about the crowd’s intentions. He also admitted he was so scared leading up to it that he stayed in a random hotel instead of his home.

He basically admits to knowingly whipping up the Qultists into a Congress-murdering frenzy so much that even he was afraid they’d turn on him.
Posted 2 months ago Report
Link Quote Reply

@Ciaran
I dont have a problem with the canadian bill, btw. I’m totally alright with them codifying what has already been the existing laws. I shoulda maded that clear.

I’m just telling you that ppl have a major tendency to do what I call “you only start looking and caring for it when it’s missing.”

You ever dealt with guys who apparently cant part with a shirt he never wears until you about to ask if he still wanna keep it?

Kinna like that.
Posted 2 months ago Report
Link Quote Reply