Generals » Don't blame me, I voted for the other guy. (Politics General) Search Posts
Started by Archonix
Posted 4 years ago
120383 replies
Subscribe

It can’t be passed via reconciliation now so it can be fillibustered, and two dems oppose it, so I doubt the senate will push it with that bit in.
Posted 7 months ago Report
Link Quote Reply

The Month of Horror
@tehwatever

Iran’s fatwa basically contemplating on putting hijab on anime girls.
I had the misfortune to have read this news from Sankaku Complex, which is I assume a very, VERY weeb site.
Said news generated 103 comments, in comparison the next few news generated way less.
The bulk of the comments boil to: Fcuk sand niggers. Leave anime girls alone. Hijabi are oppressed. Where are the sjws now? Islam gets free pass etc.
READ THE COMMENTS AND SUFFER WITH ME.
Fuxcking Weebs, man. I forgot why I never bothered with the larger weeb community. This comment chain reminds me why.

CHS, Class of 20XX
@Background Pony #CEFC
The politics were sound. Tying the minimum wage to a must-pass bill is the only way it can get passed in this day and age, because people are horrible.

But there are strict rules around reconciliation. Only budget stuff. Taxing, spending, borrowing. Minimum wage ain’t any of that. It’s just a rule, a regulation, a plain old “thou shalt not X” law.

Part-time Pizza Cat
There’s a golden idol of Trump at the CPAC.


You know, a few thousand years ago it was a golden calf. Guess this time they went with a golden jackass.
Posted 7 months ago Report
Link Quote Reply
Background Pony #1F81
@Zincy 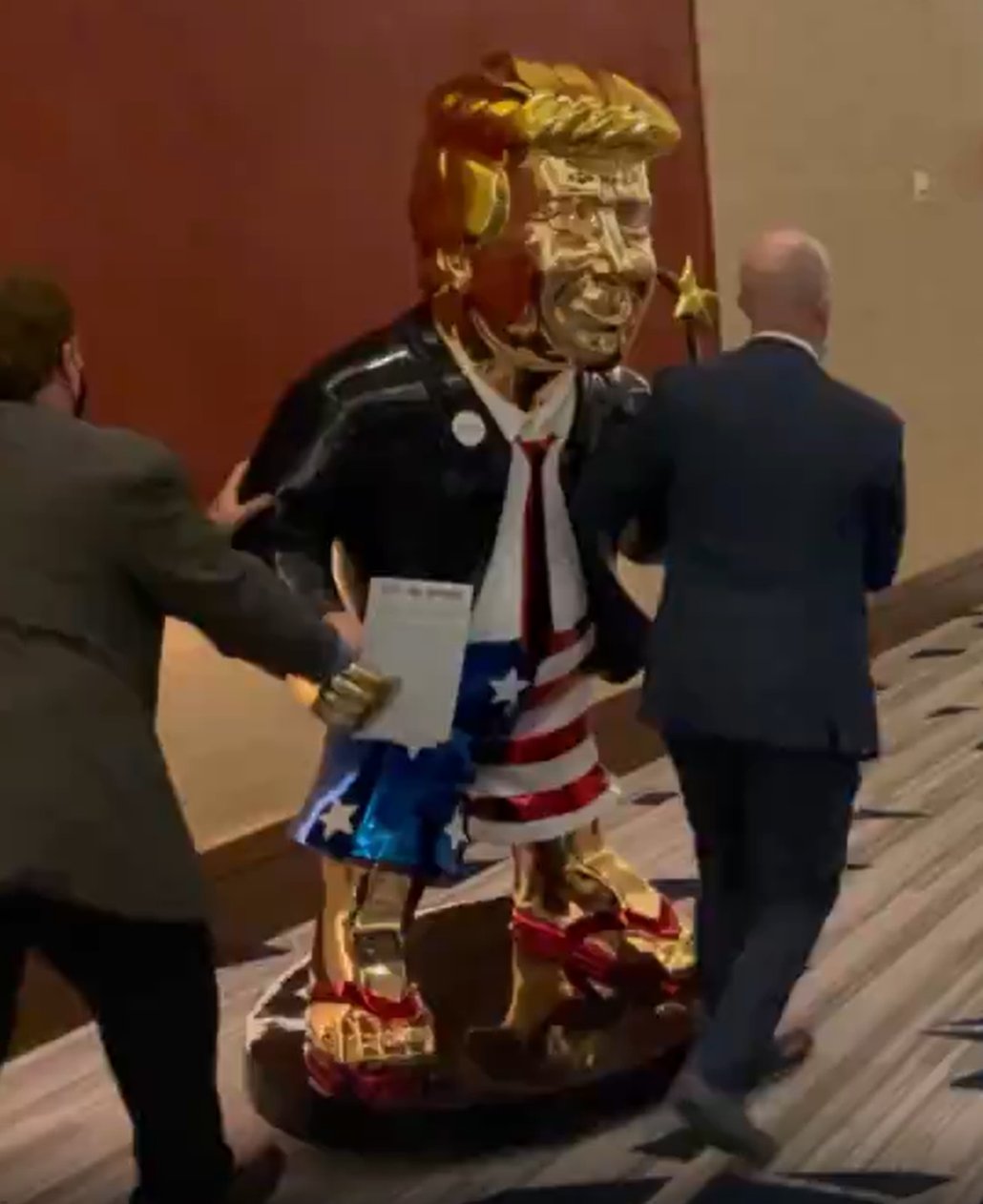 Monde de merde
@Background Pony #1F81
I swear, every time I come to believe that conservatives cannot become more of a caricature of themselves…
Posted 7 months ago Report
Edited 7 months ago
Link Quote Reply

We’ve gone from metaphorical cult to literal cult. An actual, bonafide cult straight out of the history books.

What both amuses, and saddens me are the people that got suckered into this shameful display. Including a few of our present company.


Is this what they want? To have their identities and egos subsumed by an obsession with a fat old con man that doesn’t give a rat’s ass about them? He’s not your friend, he’s not fighting for you, he does not care about you or anything that happens to you. You are, to him, stones to be stepped on for his own advantage. Nothing more. If that is the life you want to live, then fine I suppose. Exist as little more than some asshole’s personal fluffer.

I wish they’d stop stealing sacred symbols.
Posted 7 months ago Report
Link Quote Reply
Background Pony #CEFC
@Background Human
You’re right, from a political standpoint it is a tried and true strategy. You know people are demanding a relief package, you know this policy you have would otherwise require real debate, and in the end may be lower anyway due to compromise both with the other party and within your own. However if you attach it to this relief package, even if it isn’t relevant, you put the opposition in a bad position. Vote against it and you get hammered as hating the American people and voting against relief.

I almost wonder how many bible-thumping conservatives would balk at the blatant parallels.

Then I remember the last 4 years and realize the answer will be “not enough”.

Oh. Would you look at that. Another “coincidence”.

GOP sure has a lot of those.

CHS, Class of 20XX
@Kolbjorn
What even is the point of CPAC? It’s all the same bullshit you can get at home, every night on TV or 24/7 on YouTube.

Or is it like the difference between buying an album and going to a concert?
Posted 7 months ago Report
Link Quote Reply
Background Pony #1F81
@Dustcan
I’m gonna be honest, I think the majority of those so-called “good Christian men” don’t really give a shit about the bible and only want to use it as an excuse to hate gays and minorities.

And related, but when did having a gun fetish become part of the American Christian identity?

If Jesus saw the state of those “followers” he’d hang his head in shame
Posted 7 months ago Report
Link Quote Reply
Background Pony #4C24
@Kolbjorn
Pretty sure the shape of a stage baring a resemblance to a nordic rune (which doesn’t have a line going through the bottom of it, unlike the stage) is a coincidence rather than any actual evidence of them being “nazis”, as you seem to imply with a large amount of mental gymnastics. That would basically be like saying Joe Biden accidentally saying the N word at the EU Virtual Security Conference was decisive evidence of him being a member of the KKK.
Posted 7 months ago Report
Link Quote Reply
Background Pony #1F81
@Background Human
It’s to make the crazy people feel more important then they actually are.
Posted 7 months ago Report
Link Quote Reply

Part-time Pizza Cat
Virginia has spent the past 6 months making it easier to vote instead of harder.

We passed a law in November ending Gerrymandering, as districts are now drawn up by an independent committee and approved by non-partisan courts.

There is currently a bill that should pass by next week that restructures voting in VA. Voting materials, like ballots and information, will now be printed in multiple languages. “At large” municipal elections are being restricted, so municipalities cannot just vote themselves into power. Local election officials will have to open up a 30 day public comment period before any changes to voting laws, and it empowers the AG to sue if there are suspected incidents of racial discrimination in voting.


Republicans, predictably, are screaming and raging.


Between this, the demographics changes, the the rise of NOVA as a voting bloc, Republicans have likely lost Virginia for the foreseeable future.

My guess is that it comes with the two party system.

The GOP broadcasts themselves as the bible-loving party (they aren’t)? Well then of course Christians will lean towards them. The GOP is also big on guns and low regulations et al? Well, you ain’t got any other options (you do) so you have to be okay with those things too.