@Dr Outback
I applaud your linkage and will add some more

all I request is to spoiler nudity.


And just to point out: forums have the same rating rules as the images.

If You ask me: The Speed looks like to be improvred. Feel like there could be more enemies. The voices sound good. Iffy on Wolf and Falco's though.
Posted 4 years ago Report
Link Quote Reply 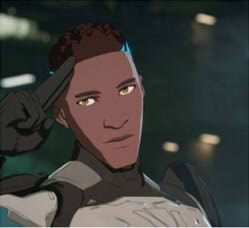 I'm a lasagna hog!
@odiz
Oh yeah, that was awesome, and kinda makes me wish they would make it a series, or mini-series, at least. You can also own the Star Fox Zero anime short from the Eshop, and watch it in HD on your WiiU if you download it, and the demo from the WiiU Eshop. Oh, and it's free!

Star Fox is probably one of my favorite Nintendo series.

@Beau Skunky
It's mine as well. It feels like it's the most mishandled Nintendo series.
as for a mini animated series luckily we have A Fox in Space. Just don't expect new episodes to come quickly.

I'm a lasagna hog!
@Dr Outback
Yeah, indeed. "Star Fox Zero" feels like the first true Star Fox game in quite awhile, despite some finding issue with the new control scheme. (Like using R to shoot, and such.) Judging from the free demo, they aren't really as bad as some say, though admittedly it does take some getting used to using the second control stick to tilt the Arwing, and such.
Despite it's issues, it's nice to have a more true-to-the-original Star Fox game, they even brought back the "Monarch Dodora" boss from the original SNES game, (and DS one) I hear.

It's a shame how underrated the whole series is nowadays. It used to be quite popular back in the N64 days, I hear.
Posted 3 years ago Report
Link Quote Reply

@Beau Skunky
My big problem with Zero is that it's essentially another Star Fox 64 remake which itself is a reimagining of Star Fox. Miyamoto doesn't seam to like complex stories. Say what you want about Adventure,Assault, and command at least they advanced the plot and expanded the universe. Command was such a mess that I understand wanting to reboot the series. If I was them I would've just ignored Command and jumped off from Assault.

I'm a lasagna hog!
@Dr Outback
Technically it was only a remake in story-only, but regardless I noticed SF is one of the few Nintendo games to have a consistent timeline. (aside from the original SNES game) Regardless, I think they kinda went overboard with the story in most of the later games, (though I still enjoyed them, but the series started feeling like a typical sci-fi series afterwards) after the out of place dinosaur planet story, (I'm aware of the game's orgins as a different Rareware game) the Sci-Fi cliché grimdark Apaaroid story in Assault, (including the killing off of some characters… well sort've, some like Pigma randomly came back) and the schitzophrenic Krystal & shipping space anime drama in Command personally I was glad to go back to a more simple SF64-like story, and bring back the original villain Andross. I don't mind complex stories, as long as they don't distract from the game, and Star Fox is not an RPG, or a movie, and the stories were getting too much at times.

It was nice to get back to basics, with a more simple story, and back to "blowing stuff up," but admittedly, I wouldn't mind going back to the original canon for the next game, or whatever. Also, Miyamoto isn't always against story, as he allows plenty for Zelda, (granted they reboot those games all the time) and Rosalina's backstory in Super Mario Galaxy. Plus some others like Takaya Imamura are just as involved in the making of Star Fox series as Miyamoto is, so I wouldn't just blame him.

As for SF2, when Takaya Imamura was asked if SF2 would be released officially in some form like "Virtual Console," he said no unfortunately. (Not to mention it's difficult to emulate/recreate the Super FX2 Chip digitally on modern consoles apparently. This is why the original SF and other FX & FX2 Chip games aren't on VC.)
To be fair, some of the stuff from the unreleased SF2 was reused in SF64, (all range mode, Star Wolf) Command, (the strategy map, and mini-battles) and Zero. (Transforming vehicles.) So it lives on kinda.
Some also speculate that Bill & Katt were expies of Miyu & Fay. (Though, I wouldn't mind them being canon too. Sega canonized scrapped "Sonic the Fighters" Honey the cat, after all. So Beta characters becoming canon has happened before.)
Posted 3 years ago Report
Edited 3 years ago
Link Quote Reply

@Beau Skunky
The stories For Adventure and Assault aren't are very straightfoward and not much more complex as 64. Adventure simply put is about finding and restoring four stones that magically keep the planet you on from being torn apart. You then have to find and defeat the man and his personal army that invaded the planet and took the stones in the first place. meanwhile you have to free a vixen that is trapped in a crystal by collecting the guardian spirits of the planet. Assault's story was simpler. Insect like mechanical aliens that are similar to the Borg reappear and attack. You have to stop stop them from invading the Lylat System,find their home and wipe them out. That's a "blowing stuff up"story if I ever heard one. Sure it isn't original but it doesn't need to. I'm more interested in the character interaction and world building than the initial plot. It's a dark story but it isn't edgy or grimdark and it fits. Star Fox overall isn't a lighthearted story. It's a war story. The protagonist's father is betrayed and killed before the game even begins. The characters don't let you forget that fact especially the villains. I like that Star Fox is a bit more serious and action packed than other Nintendo Properties.


As for SF2, when Takaya Imamura was asked if SF2 would be released officially in some form like "Virtual Console," he said no unfortunately. (Not to mention it's difficult to emulate/recreate the Super FX2 Chip digitally on modern consoles apparently. This is why the original SF and other FX & FX2 Chip games aren't on VC.)


I don't really understand why. I would assume it has to do with the the architecture of the Wii and the Wii-U. Hopefully it's easier to do on the Switch. Yes elements of SF 2 have been used in other games but it doesn't have the same feeling.

I'm a lasagna hog!
@Dr Outback
Don't get me wrong, I actually agree that SF should be a li'l more serious, and I actually enjoyed those games too. Just some things like Assault's spacesuits replacing the classic SF team uniforms, and such didn't sit well with me. But I do agree more character interaction would be better. It was annoying "Assault" completely ignored Pigma's backstory of betraying Fox's father, and such. (Only briefly being hinted at in one cinematic scene.) Fox's reaction to Pigma was basically like he was just a minor annoyance, rather then the creep who betrayed his old man.

As for "Adventures" I hear in they had to scrap some things due to the Microsoft buying Rare incident that resulted in "Star Fox Adventures" being somewhat incomplete. (A shame.)

Hope so, a SF2 official release would be nice. I think another factor is the game of SF2 is only like 90% complete, wasn't ever officially released in any market prior, and perhaps there isn't enough demand for it. Sadly, Star Fox is a pretty niche series nowadays.
Posted 3 years ago Report
Link Quote Reply

They're doing it. The jerks are actually releasing it. Now I have to buy it.

YOU WILL BOW TO ME.
@Dr Outback
Have fun.
Posted 3 years ago Report
Link Quote Reply

I'm a lasagna hog!
@Dr Outback
Please tell me that's not a hoax! ME WANTY!

I actually have the NES Classic Edition, it's pretty good, and better made then most cheap plug-and-play retro systems.
Posted 3 years ago Report
Link Quote Reply

Man, I never got around to playing half of these games, and while I usually would just emulate these games, I'm willing to spit out the 80 for this if I could
Posted 3 years ago Report
Link Quote Reply

It's also, nice to see the Star Fox games & Yoshi's Island games, considering they never got a VC rerelease. (Due to possibly issues recreating the Super FX Chip digitally, and such.) Surprised, they didn't include "Stunt Race FX." (Said game has a Fox McCloud cameo too.)
Posted 3 years ago Report
Link Quote Reply
Interested in advertising on Derpibooru? Click here for information!