Sir Percival is available to unlock in Forces now, we just need Sir Gawain and we’ll have the main cast from Black Knight.
Posted 2 months ago Report
Link Quote Reply

Cute wittle skunku
@Dr_Osaka
They stated the Warehog is coming this Halloween, which I’m surprised took them this long, seeing as the Warehog Sonic has his fans.

I doubt they’ll ever add Marine the raccoon, whom is one if my favorites. She got some backlash at first, as some found her behavior, and Aussie slang (which was, because she had a Kansai dialect in Japan) annoying, oddly despite only speaking in text. Though, some fans miss her, or feel she’s undeservingly ignored. Especially, with Sonic Rush Adventure’s ending hinting she has some kinda secret power.

@Cosmas-the-Explorer
Yeah, Big doesn’t get much love, despite occasionally having his rather hilarious, and badass moments in the comics/games.
He was great in the Team Sonic Racing official animated short.

In the first ep of Sonic X and some games, he mostly just makes Derpy-style cameos. 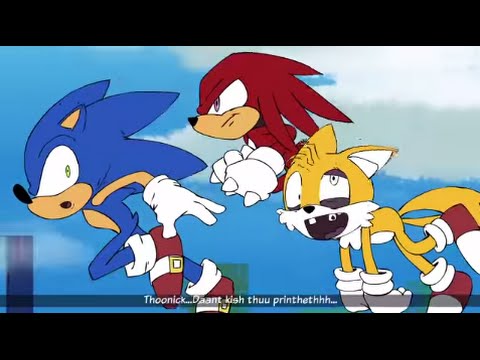 Ecto-Phase,Activate!
@Blissful690
I should have said the picture is a link.
Posted 2 months ago Report
Link Quote Reply

Some shorts are hit or miss though. Like the one where SatA.M. Robotnik destroys 4Kids’ HQ, which was oddly treated like the “creator of Sonic X,” rather then the localizer. People forget “Sonic X” was originally made by TMS.

Cute wittle skunku
@LightningBolt
Surprised to hear you say that, lol. (Normally, you seem to like the darker/serious characters.)

Passionate opinionator
@Beau Skunky
Yeah. While each game is doable to do perfect runs of, erasing your score just by one death is too harsh. I think reducing your score by half (or a third) or reload where you were from the last checkpoint with your score intact but the time is still at where you died at would be a better compromise. Hopefully we get some mods of the 3D games with other QoL patches that push this idea so people might enjoy the 3D games a little better.

Yeah, but the game was too simple for its own good. And from hearing how Naka treated other Sonic co-developers, some would say Naka got karmic payback for his actions.

@Beau Skunky
I just find it depressing when I see most people talk about how the versions of Sonic and other characters I like are considered the worst/weakest of the entire Sonic multiverse.

@Dex Stewart
I agree with Beau. It sounds like an idea for disaster. Though I do wonder what would happen if we got a “Spiderverse” take on Sonic. (I’ve still haven’t seen Spider-Man: Into the Spiderverse yet so I hope I’m right with my concept theory.)

@Cosmas-the-Explorer
As a Cream fan, I would have been in all for that idea.

@Cosmas-the-Explorer
I just like the idea of Big fighting off bad guys with his mostly blank face.

@Beau Skunky
Oh god, I never liked that short. Probably because I was a Sonic X apologist at the time. Also from what I heard, if it weren’t for 4Kids commissioning TMS, we would have never got Season 3 of Sonic X. Plus, I think even they were aware of Chris’s hatedom so even they knew that giving Chris his own spinoff would be a bad idea.
Another short I didn’t like was Sonic telling Mario “I hate you!” I don’t know why I can get easily offended by the dumbest shit at times.

Baby I'm the Trouble Man
@Beau Skunky
I’m kinda just meh on her. She usually switchs between mildly annoying and tolerable on a whim, but her worst moments don’t even hold a candle compared to the those of Big, Chris, and Elise.

Also, she wad the lead-up to the best face in Sonic comic history, so I gotta give her props for that.
Posted 2 months ago Report
Link Quote Reply

Blissful690
Glimmy is best pony
@Red-Supernova
In regards to score, Sonic Colours is rather forgiving in that it doesn’t reset your score to zero after a death, unless you take too long in a level.
Posted 2 months ago Report
Link Quote Reply

Passionate opinionator
@Blissful690
Really? Its been a long time since I’ve played Sonic Colors but were they more merciful towards S-rank attempts?
Posted 2 months ago Report
Link Quote Reply

Cute wittle skunku
@Red-Supernova
Forces was also a li’l easier to get higher ranks on some levels. And I agree the resetting scores, or making one minor mistake to repeat the entire level again was a pain.

@Penguin Dragneel
You mean the Shadow meme face?
Hey, I like Big. :(

@Red-Supernova
I see people bash the Sonic stuff I like all the time too. It’s best not to let it upset you.
I guess it’s hard when you see it constantly. (Sanik fans love to bash… I usually try not to bash things.)

That parody short was kinda a shallow parody, because even if they wanted to, there’d be bo way they could take a character from the show, and give him their own show.

I admit, I didn’t like some of 4Kids changes too, but they have done some good things like the Pokemon dub was alright, (and less censored) and as you said they helped get Sonic X a third season, seeing as the show (and Sonic franchise in general) wasn’t very popular in Japan.

And granted a few edits were better, like the gag in the trainride scene in the third episode works better without Amy’s thought dialogue.

Passionate opinionator
@Beau Skunky
Oh yeah they did in some places.
I would love to see mods of the other 3D games that offer similar mercy like Colors and Forces did.

You got that right that I see it constantly.

Yeah, they knew that a Chris Thorndyke spinoff would be recipe for disaster.

Its quite interesting that they were the ones to get Sonic X a third season with more action and higher stakes but yet they still removed the death scenes.

I remember you saying that. I’m not surprised if one of 4Kids’ better moments were how they handled comedic scenes.

I liked Bokkun as well.

Ecto-Phase,Activate!
@Red-Supernova
Rouge and Topaz should have gotten a spinoff. Without Rouge’s 4kids saxophone music though.
Posted 2 months ago Report
Link Quote Reply

Passionate opinionator
@Dex Stewart
Lol. I have no idea why 4Kids chose to associate different background instruments with every character in their dubs.
Posted 2 months ago Report
Link Quote Reply

Ecto-Phase,Activate!
@Red-Supernova
Because it’s 4kids so every possible element has to be tampered with.
Posted 2 months ago Report
Link Quote Reply

Bad taste in everything
I am in the process of doing what I couldn’t do as a kid: going for 180 emblems in SA2B.
Posted 2 months ago Report
Link Quote Reply

On the surface it appeals to Texans.

I thought it would be a Harley & guns version of Nightmare Creatures but you’re mostly just playing Sonic Adventure.

Blissful690
Glimmy is best pony
@pixel
I wish you good luck on getting all the A ranks. You’ll need that luck.
Posted 2 months ago Report
Link Quote Reply

Enter if you dare
When I 1st pre ordered sonic colours ultimate I saw no keychain.

Cute wittle skunku
@northern haste
Shame. I thought about preordering for the gifts, but I don’t know the best place to get the best ones.

@ᏰᎯᎠᎻᎬᎯᏒᎿ
I dunno, some Texans, and almost every state hated it.
I liked it, despite it’s flaws.

@Red-Supernova
I guess in Rouge’s case it’s to highlight her “sexyness.” Though, ironically, 4Kids sometimes edited her cleavage line out, and made her chest smaller.
You can probably guess how Rouge fans reacted.

@Red-Supernova
I remember hearing the third season of SX never even aired on Japanese TV, because the show was already cancelled. (As Sonic is sadly unpopular in Japan.)
It was only shown officially in Japanese on websites and streaming.