Cool Spook
@Dirty Bit
Same. I don’t have much faith in the remake.
Posted 1 years ago Report
Link Quote Reply 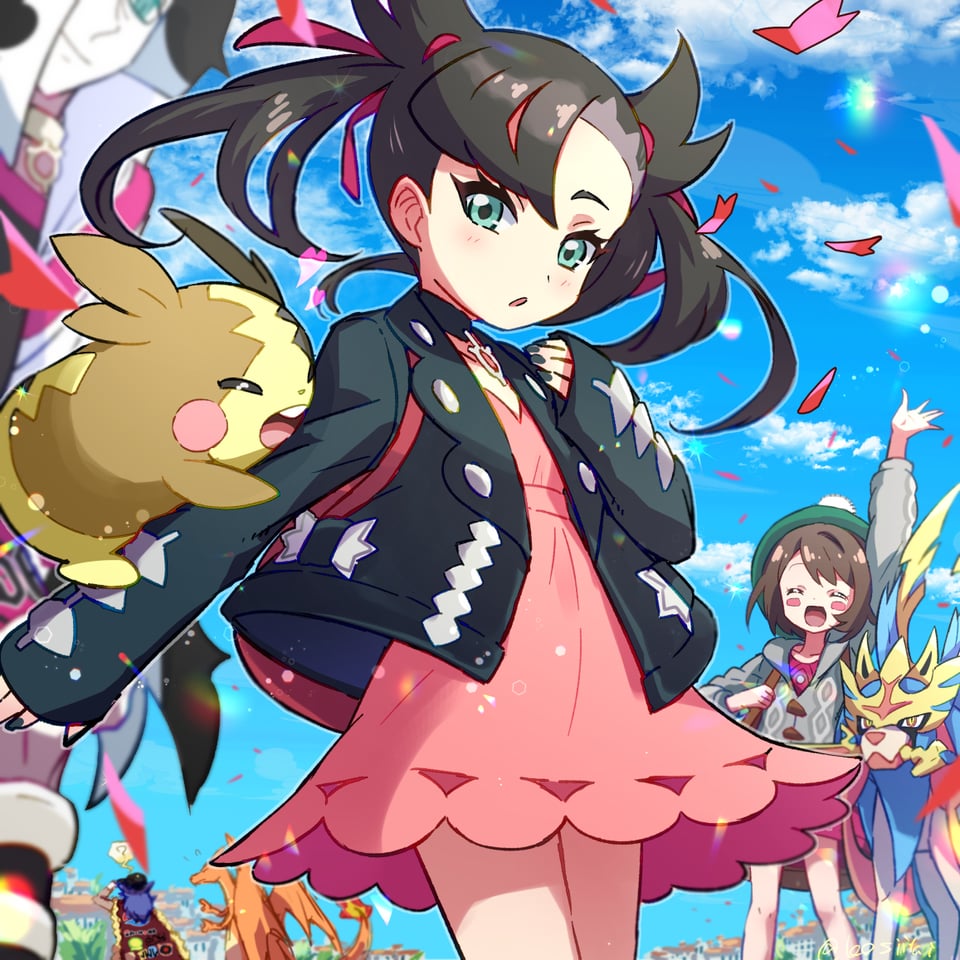 She definitely has the best character design in the game I’d say. 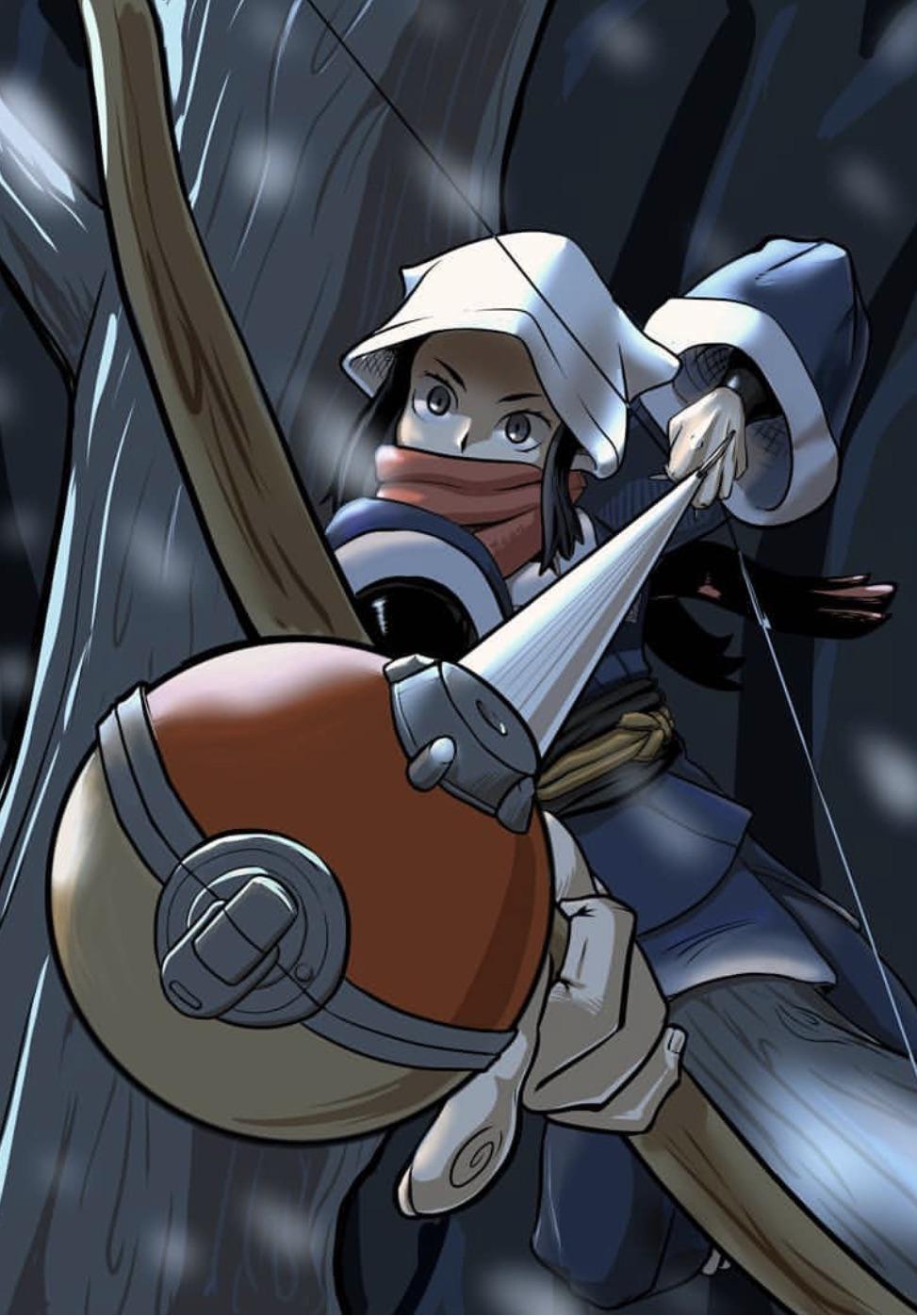 The great Sinnoh Ninja strikes from the skies!

shinigamiPeter
Finally decided to try out Pokemon Shield (it was laying in my drawer for months, still in foil; was thinking about reselling it with profit since I bought it for 20$ on sale). Because of mandatory Exp Share, and to make things more interesting, I chose to go with Nuzlocke rules and constantly shuffle my main team with some lower level fodder (still have everyone around lvl 18 when average trainers are on 15. Sasuga Gamefreak.). Currently on Route 4. Main team:
-Simon the Raboot, so far does a good job as the teams fastest and hardest hitting member
-Artoria the Corvisquire, was really happy to get her on route 1 (I really want to try out Corviknight)
-Nero the Roselia, made catching a lot less of the headache with her Stun Spore
-Jose the Lombre, always wanted to try one of these, though considering that I already have Roselia, I may end up benching him later
-Teddie the Stufful, could’ve very well be the end of the run (or at least couple main mons). Even at 1/3 HP and paralysed he just wouldn’t stay in the ball, and with his strong Attack and everyone running on fumes I had to sacrifice Zim the Blipbug just to buy time. At least he has Fluffy and not Klutz, so it was worth it in the end
-Manako the Duskull, never used one before, at very least she’s really bulky
-until recently the last main member was Nina the Zigzagoon, but she unfortunately died to Bede (I wasn’t expecting Endeavor from Solosis, followed by Disarming Voice from Hatenna); will have to replace her with someone.


@Dr_Osaka
All of these voices running through my head~

@igotnopicks
Yeah, when I was doing the Nuzlocke of Platinum years ago, I was really lucky to get Weavile. I don’t think anything other than it in Sinnoh would be able to reliably take care of The Landshark without sacking mons, with the exception of maybe Froslass. And probably Togekiss in remakes, assuming it’s possible to get it without trade. And that they won’t give Garchomp Stone Edge like in Unova just to fuck with people.
Posted 1 years ago Report
Link Quote Reply

Monado User
@shinigamiPeter
Watch them give the Garchomp a Mega Evolution and Stone Edge just to spite us.
Posted 1 years ago Report
Link Quote Reply

Your Ancestor has spoken. Time to date that Pikachu that you always wanted to.
Posted 1 years ago Report
Link Quote Reply

Well you heard her, get Loppuny and get going.
Posted 1 years ago Report
Link Quote Reply

Yes, I’m usually the one that participates in those arguments :P

Latecomer
@Littlecabbit
Oh really? I didn’t know anyone else had!

So, what’s your take on them?
Posted 1 years ago Report
Link Quote Reply

I don’t think the pokemon in the games are any less intelligent or lacking in emotion than the ones in the anime or movies really, the games tend to lack much in the way of details when it comes to anything not on the boxes, and I don’t think there’s any reason to think otherwise really.

I mean all the in game lore that mentions the relationship between humans and pokemon should point against the idea, even the God of the pokeverse is a Pokemon
Posted 1 years ago Report
Link Quote Reply

Latecomer
@Littlecabbit
Well, we might know what’s going on with him a bit better after this new game.

I have a broad view - I think Pokemon intelligence varies quite widely, both by species and indivdual. (Well, anyone who’s done Smart Contests could tell you that…) And even the smart ones might not think like humans, especially if they’re wild-raised. (But then, naturally when I get inside their heads, they do often end up fairly humanlike-with-tweaks as a consequence.)
Posted 1 years ago Report
Link Quote Reply

Cool Spook
@Littlecabbit
Again, people could have been into bestiality and claimed that the pokemon gave consent (or go the Mass Effect Prothean and have them not care what the “lesser races” think), and Arceus is a Legendary, a group who’s powers tend to be greatly exaggerated.
Posted 1 years ago Report
Link Quote Reply

Monado User
@Meanlucario
No no. You are not on to something. In a myth it states that humans and pokemon were one in the same.

So if we go by the myth’s standard in the lore, Humans and pokemon were the same being at one point.
Posted 1 years ago Report
Link Quote Reply

Cool Spook
@igotnopicks
And myths are, well, myths. That’s my point. There can be truth in myths, but they’re still myths.
Posted 1 years ago Report
Link Quote Reply

Just about any psychic type could rip your dick off and break your bones with it’s mind if it didn’t like what you were trying to do, and for that matter most pokemon could murder you horribly at a moments notice, pokemon are quite capable of protecting themselves against humans.

and I’m not talking about purely sexual relations, if pokemon are capable of wide array of emotion, then they’d be capable of romantic feelings as well, quite a few pokemon in the anime show such capabilities, and again, just because the anime tends to ignore some of the game mechanics and give the pokemon crazy shounen powers for the sake of “cool” fight scenes doesn’t mean everything shown in the anime should be thrown out the door

I don’t feel all of the media outside of the games should be considered non-canon in everything they do and show, they flesh the pokemon out in much greater detail than the games do, seriously the games don’t touch upon anything if it’s not written in the pokedex or “books”, and if you throw all of that out, then we know nothing about the pokemon to begin with.

the pokemon might as well just be cardboard cutouts then, they’re mere game mechanics and nothing else at that point
Posted 1 years ago Report
Edited 1 years ago because: hiding vulgar language
Link Quote Reply

[screams in German]
What the fuck are you guys talking about? Literally any Pokémon can kill you. They’re basically superpowered animals.
Posted 1 years ago Report
Link Quote Reply

Broken Ball of 💽TM21
@Scrabbleman
This is more about if pokemon can consent.

I’m of the opinion they can.

[screams in German]
@WyrmSpawN
Look, consent or not, I’m not trusting them close to my dick.
Posted 1 years ago Report
Link Quote Reply
Interested in advertising on Derpibooru? Click here for information!