In A.D. 2101
@Wiimeiser
True, but I still want to see if Bonk can have some relevance in today's world. Maybe a reference.
Posted 15 days ago Report
Link Quote Reply

Why do I come here?
@Dirty Bit

tinyurl.com/dymbb3a
Since we have two spots left (I have learned that Pyra/Mythra is in a "Pokemon Trainer" situation: they're numbered separately, but they're still technically just one character), I have high hopes for my biggest pick, Crash Bandicoot, but less hope for my other two big picks, Dr. Robotnik and Waluigi (and also a Hollow Knight Deluxe Mii Costume).
Posted 13 days ago Report
Link Quote Reply

Sparx
#056 Speed Factor
Who here managed to do 9.9 Classic with every character? Without tickets?

How the heck do you finish Little Mac's against those fucking hands?

Haven't, once with Ganondorf, and I can't possibly tell you. 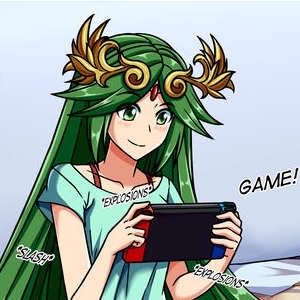 @Sparx
I have. It's been months since I did with the base game roster, but I do it each time a new DLC character comes out. With Little Mac, I'm going to guess I probably did Up-Smash on their wrists over and over because that's the lowest part of the hand. That's assuming it reaches, it's been so long I can't remember. Side-B and Up-B are strong attacks to use in the air too, be very careful with Up-B though. Also, try countering single hit attacks like when they punch or slap the ground. With multi-hit attacks like that spinning drill attack or the gun, it's probably not a good idea because the follow-up hits might hit you.
Maybe attempt it on a easier difficulty to get a feel for which of your attacks hit from the ground, and which of their attacks you can safely counter.

Bad Language is why this is spoilered.

I've seen another image where Mythra and Kazooie butt heads

Monado User
@Dirty Bit
Kazooie buts heads with everybody including Banjo. It's her character.

Mythra is a much nicer Kazooie.
Posted 10 days ago Report
Link Quote Reply

I'm aware of that, dude. I was talking about an image, was all.
Posted 10 days ago Report
Link Quote Reply