For the God-Princesses! (Warhammer 40k thread).

For the Emperor!
@Nittany Discord
Yes, I’ve been teaching her. She doesn’t know all the things yet, and I still have to guide her, but she gets it.
Posted 2 years ago Report
Link Quote Reply

For the Emperor!
@chaotic-7
They will burn in holy fire!
But you’ze bringin’ me off da point. Da greatest iz da green!

Posted 2 years ago Report
Link Quote Reply
chaotic-7
@Communist Starlight
I’ve noticed that about the Orks too which is both funny and cool at the same time. How they basically act like a masssive die-hard group of soccer or rugby fans that completely loses their shit and litterly demolish anyone or anything that trash talks their favorite team.

I say this because I have seen raw footage of soccer riots in the past, it might sound funny at first, but it’s very, very brutal in truth.
Posted 2 years ago Report
Link Quote Reply

Smiling Panzerfuchs 2.0
This image is blocked by your current filter - click here to display it anyway

I have been playing Warhammer 40k since 1993, when the second edition was published in Germany. My neighbor and I joined together, he wanted to play Space Marines, so I took the Space Orks. But I had so much fun with them that I stuck with it.

Meanwhile I own besides Orkz also Imperial Army, Space Marines, Adeptus Sororitas, Grey Knights and an Orc fleet for Battlefleet Gothic. But everything Imperial is only small and insignificant to my huge orcish horde. Unfortunately I never really got around to painting or assembling much over the years. There are still complete sets of Ork battle tanks and fighta bommerz lying unpacked in some corner.

My little treasures include sourcebooks from the time of Rogue Trader such as Waaargh: Orks and lots of models from the second edition. My biggest goal is either to own a Gargant one day. I would love to build one from an old vacuum cleaner, but I will probably buy one sooner or later. ;-)
Posted 2 years ago Report
Edited 2 years ago
Link Quote Reply

For the Emperor!
@DarkObsidian
My dad got me into warhammer when he bought the tooth and claw battlepack. He later bought me the ork starter pack and I just enjoyed their bellacose nature since then, I do enjoy a senseless brawl and crazy color schemes.
I don’t care about the meta, I just love my orks and I don’t mind losing as I have fun.

Absolutely valid point. But I really had to laugh just now. I didn’t understand what bellacose nature meant until I realized that you meant bellicose. But I only guessed that now because I read De Bello Galico. Sorry, I was having a really good time when it finally hit me. ;-D

Well, I am quite fascinated by the lore of the Orks and its development in the course of the different editions. This went so far that I really hated Andy Chambers & Gavin Thorpe, the author & co-author of Codex: Orcs (3rd Edition) for a while. But in the meantime everything is good again ;-)

Unfortunately, I haven’t been able to play the tabletop for several years. Too much to do in my job and too many of my old comrades have moved away or now have families. I could go to one of the many Games Workshop shops, but I always feel a little uncomfortable there. Nowadays I play more the computer games. ;-) 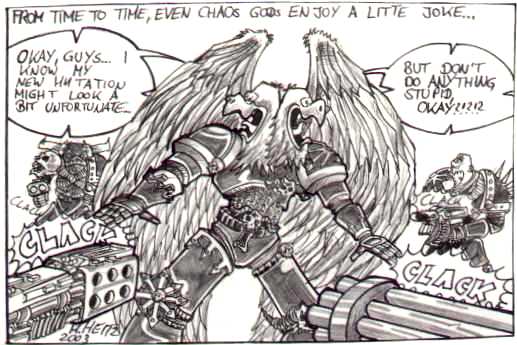 For the Emperor!
@DarkObsidian
Oh, oof. >.<
I would’ve went with guard because I just really, really like tanks, but I think I’ll stick with orks for a bit.
(it also helps that My dad has me paint his space wolves from time to time. Gives me a break from orks when I need it.)

Moderator
Dress Fanatic
I am hoping to starting building up a second faction one day. I love Tyranids, but other armies have fun mechanics that I’ve love to try out. I am considering building a Lamenter army because I feel sorry for those poor guys. I’ve also considering playing Genestealer Cults so I can run guard units alongside my Tyranids for fun.

Meanwhile, I do want to make custom fluff for my homebrew hive fleet. I have a custom hive fleet stratagem in mind for them.
Posted 2 years ago Report
Edited 2 years ago
Link Quote Reply 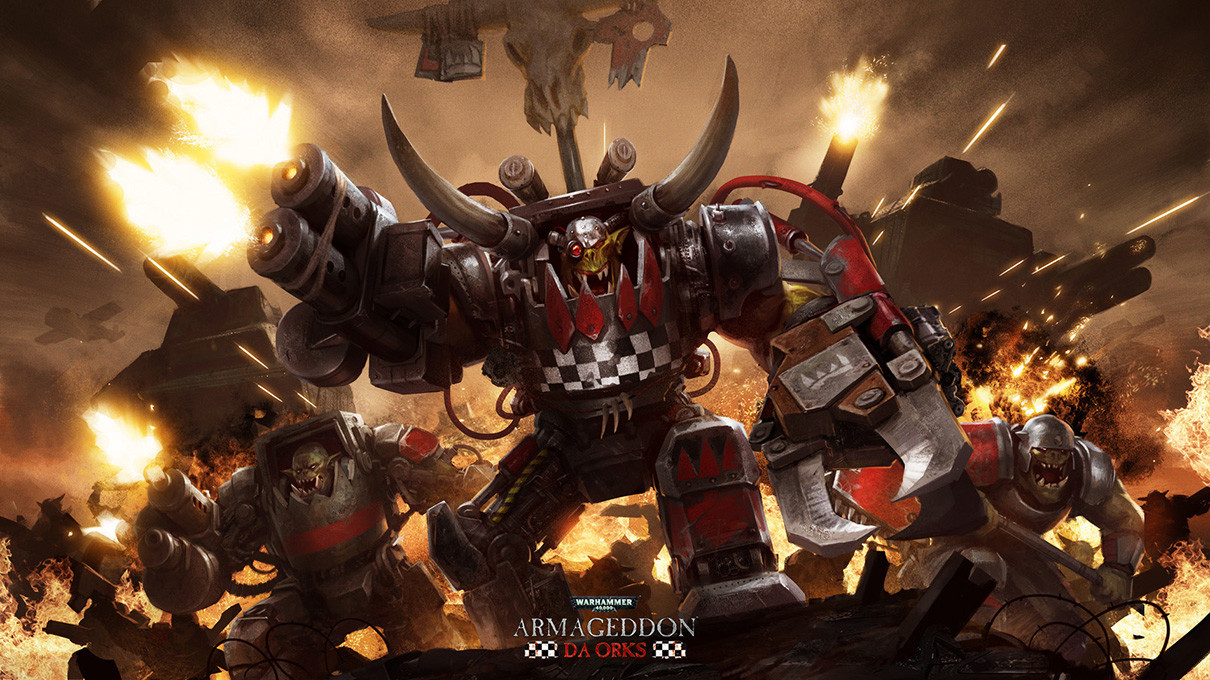 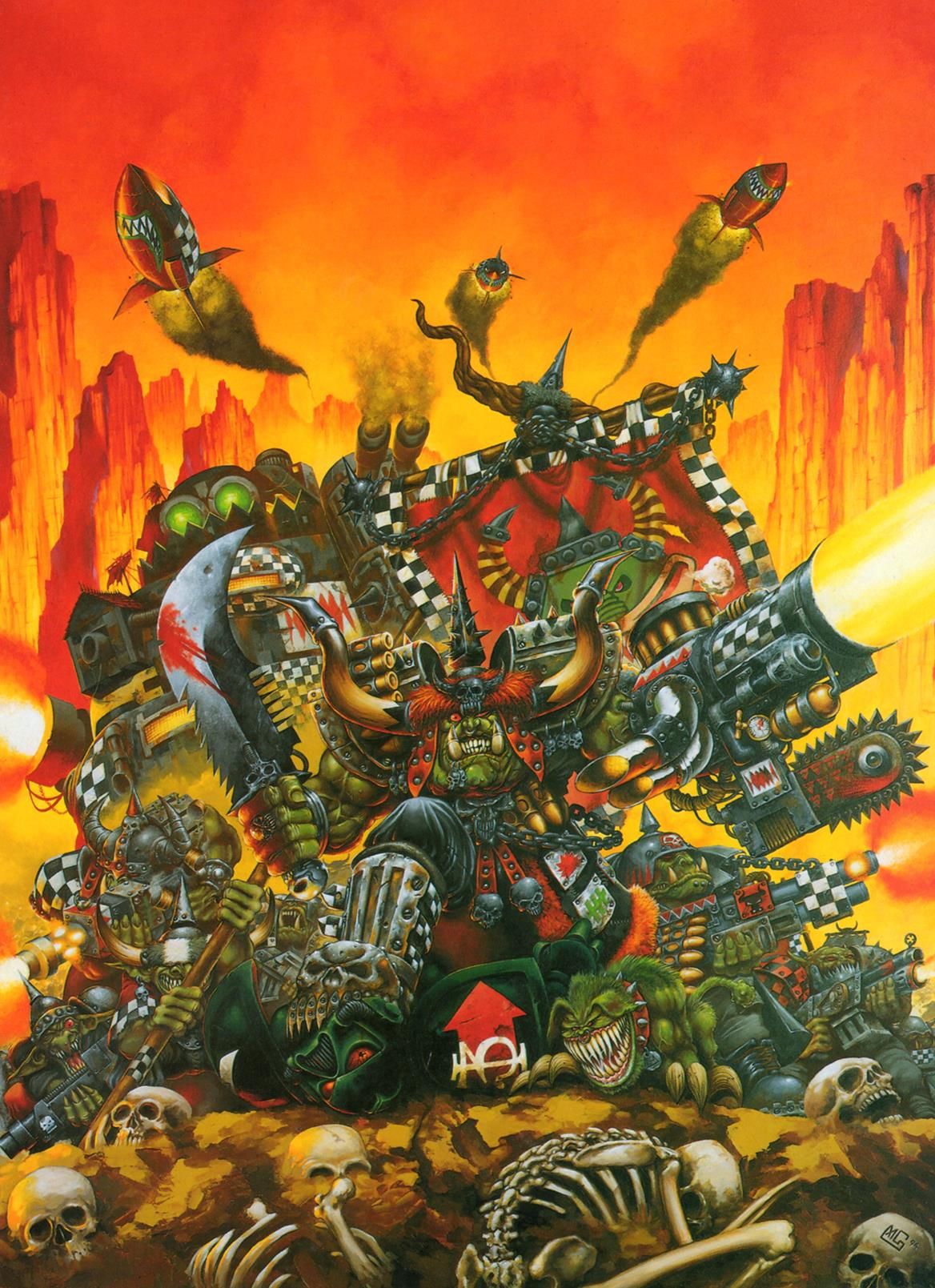 Orks when I started playing. Find the difference. ;-) 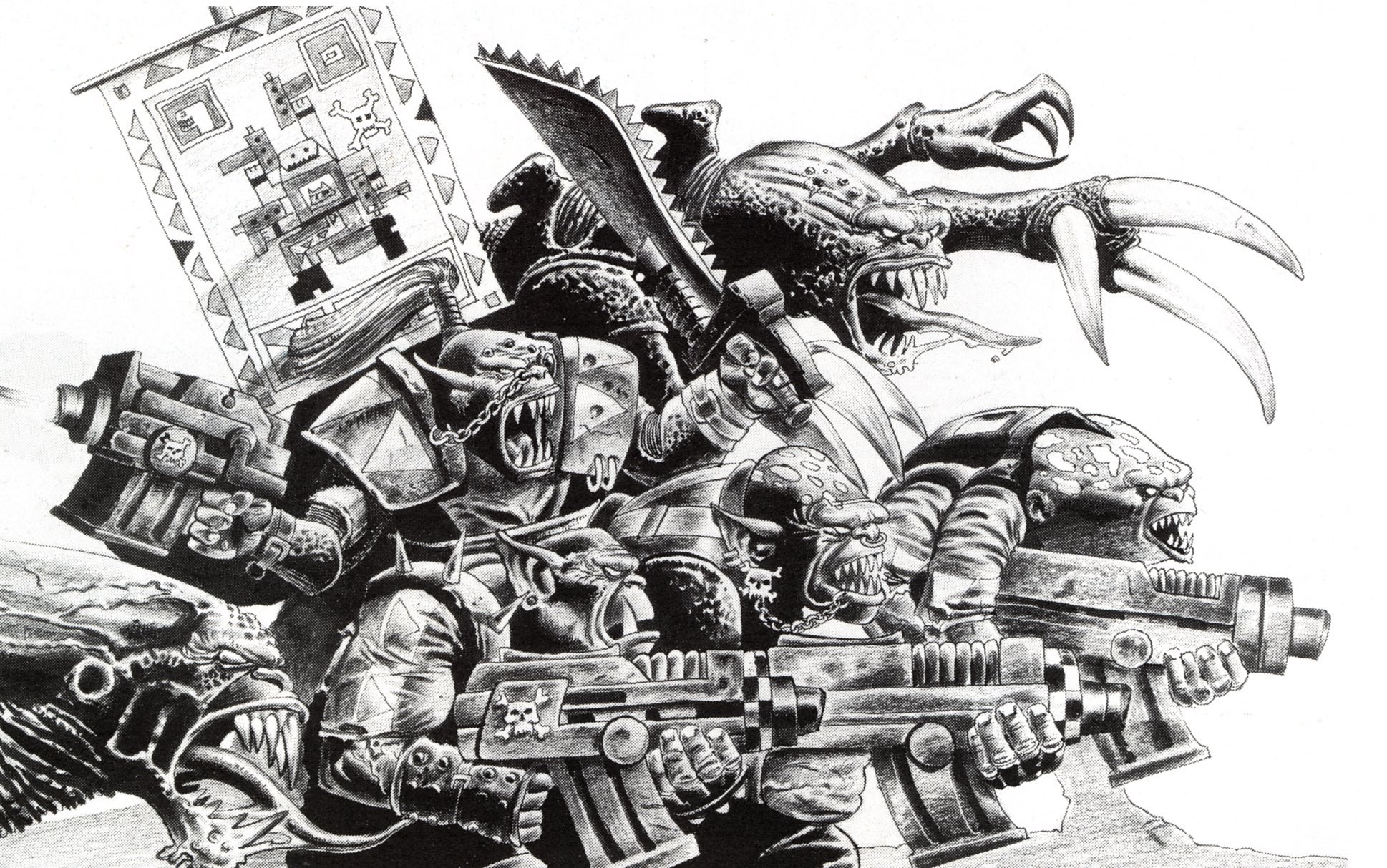 What I think about Genestealer cults. ;-)

For the Emperor!
Orks have one universal constant, the desire to go fast and to krump stuff good.
Waz dat two? Must be da umie’s.
Posted 2 years ago Report
Link Quote Reply

Smiling Panzerfuchs 2.0
Why is it that every time I hear “It’s a good day to die from Starship Troopers 3, I think of the Planetary Defence Forces of the Astra Militarum? ;-D

We call upon our troopers, in this our darkest hour,
Our way of life is what we’re fighting for,
The flag that flies above us, inspires us each day,
To give our very best, in every way!

It’s a good day to die,
When you know the reasons why,
Citizens, we fight for what is right,
A noble sacrifice,
When duty calls, you pay the price,
For the Imperium I will give my life!

Also in the Top 10 of the best Astra Militarum songs:

Sean Householder - The Warrior Song (aka The Imperial Guard Song)

‘Cuz I’ll win, I’m one-of-a-kind and I’ll bring death
To the place you’re about to be
Another river of blood runnin’ under my feet

Forged in a fire lit long ago, stand next to me
You’ll never stand alone
I’m last to leave, but the first to go
Emperor, make me dead before you make me old

I feed on the fear of the devil inside of the
Enemy faces in my sights
Aim with the hand, shoot with the mind
Kill with a heart like arctic ice

Yeah, the artworks have always been something very special in Warhammer 40k. The White Dwarf, but also the Black Library have ensured this over the years. However, it was a pity that between Rogue Trader (the legendary first edition) and Warhammer 40. 000 (from the second edition on) there was quite a reduction of Xenos flora and fauna. Especially the third edition was a kind of tabula rasa and the focus was only on the armies.

Before that, there were many monsters and alien creatures that could theoretically have been brought forth on the field. However, since GW had made almost no models of them, they disappeared in later editions. Nowadays, some xenos models are experiencing a revival, but also only in small numbers for special missions or campaigns.

I only mention this because especially in the early editions there were honestly very few clear ideas about what the Warhammer 40k universe looked like. Many artworks from earlier editions were constantly recycled, and it wasn’t until the Fourth Edition, with the introduction of hardcover sourcebooks and expansion books like Cities of Death, that I think the situation changed significantly. ;-) 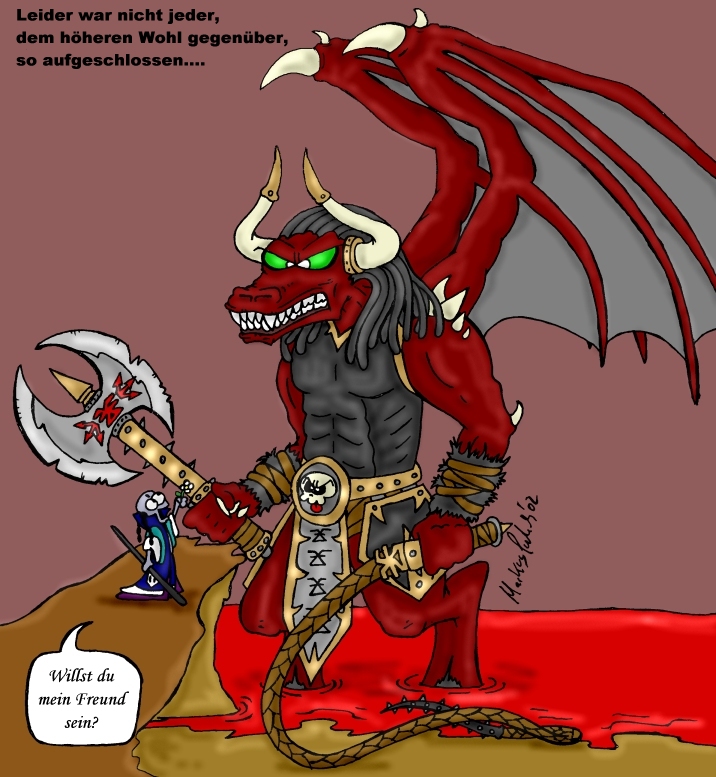 Unfortunately, not everyone is so open to the greater good…

Ethereal: Would you like to be my friend?
Posted 2 years ago Report
Link Quote Reply
chaotic-7
@DarkObsidian
I think it’s cool though, on how a tabletop series like Warhammer has lasted as long as DnD. I don’t think there are too many series that can hold that claim, unless you count Mechwarrior or Shadowrun (that’s another series I like.)
Posted 2 years ago Report
Link Quote Reply

Eeyup. Me too. But I admit, I lost my connection with the BattleTech/Mechwarrior universe after the first few Mechwarrior: Dark Age books. But the BattleTech Game from 2018 was still quite good. Meanwhile my tabletop mechs are gathering dust somewhere in the attic. ;-D

And I gave up Shadowrun after the Fifth Edition due to a lack of players among my friends. To start now with the sixth edition with a completely new group, I somehow don’t have the time for that. ;-)
Posted 2 years ago Report
Link Quote Reply

For the Emperor!
What are all of the interesting things you bring up? I’ve never heard of them.
Posted 2 years ago Report
Link Quote Reply

Which one of us and what do you mean exactly? :-)

Posted 2 years ago Report
Link Quote Reply
chaotic-7
@DarkObsidian
Most people aren’t even aware that Mechwarior started out as a pen and paper series just as Cyberpunk was originaly a precursor to Shadowrun. Which would make for an awesome re-launch if someone did it like they did Cyberpunk don’t get me wrong, I love the returns’ games, but a set universe like that is just dying for a videogame revival done right.
Posted 2 years ago Report
Link Quote Reply

For the Emperor!
@DarkObsidian
Both of you, these are new titles to me.
Posted 2 years ago Report
Link Quote Reply
chaotic-7
@Communist Starlight
You mean titles like Shadowrun and Mechwarrior? I don’t really know a whole lot about Mechwarrior myself. Other than there were a buttload of videogame titles during the 90’s, I’d just found out a few years back myself that it was originaly a pen and paper series. It was mostly about piloting giant mechs hence the name. Shadowrun on the otherhand, well your aware of the game Cyberpunk 2077? Well way back in the eightys there was the pen and paper game Cyberpunk 2013 (the guy who made the original helped with 2077).

Anyway, a group of people liked the game so much that they wanted to make their own spin on the genre, but with fantasy creatures and magic as well as advanced technology ( think DnD meets Ghost In The Shell) Thus the Shadowrun series was born, a world setting where megacorps run the world, magic exists, the president of the United States is a dragon and the world is inhabited by humans, elves, drawves, orks and trolls. All in all it’s a pretty uniqe setting that suprisisingly works lore wise.
Posted 2 years ago Report
Link Quote Reply

For the Emperor!
@chaotic-7
I would absolutely love for our president to be a dragon.
Posted 2 years ago Report
Link Quote Reply
Interested in advertising on Derpibooru? Click here for information!