What do you mean as bias as “family guy”?
Posted 11 months ago Report
Link Quote Reply

It won't be okay
@Don’t
Not ringing any bells with me.
I made a mistake before. I said it looked like Carl2 was on Jettix, but further looking says it was on Teletoon. Also, there’s only one T in ‘Jetix’. Either way, that could be a lead, since lists of shows they’ve both put out are available in places like this or this.
Posted 11 months ago Report
Link Quote Reply

Cute wittle skunku
@Hali the Emoji girl
@northern haste
They’ve been getting pretty political & preachy in recent years to the point, even those that agree with it’s messages are getting sick of it.

I mean, I agree with some things, but I tend to tire of hearing of politics constantly sometimes.
Posted 11 months ago Report
Link Quote Reply

Enter if you dare
So was the Bunny episode Suppossed to be a Community on guns?
Posted 11 months ago Report
Link Quote Reply

“[Critically praised cartoon] is actually terrible, and if you like it, you have bad taste!”.

Passionate opinionator
Once I get together with my family again, I really need to watch the Animaniacs revival. I’m not even sure if I’ve watched every episode of the original.
Posted 11 months ago Report
Link Quote Reply

Mes amis, we hate American too! Come to France, and we shall mock the country that saved us twice from the Germans!

Cute wittle skunku
I watched the “Batman: The Killing Joke” movie. This is probably the first Batman animated adaptation I’ve seen that I’ve read the original comic first, (and own the Deluxe edition book) and having said that I can see why many seem to hate the animated adaptation, as honestly the first 30-minutes of the movie feel like a totally different unrelated story, added just to make it movie length. I also understand most fans dislike the idea of Bruce X Barbara as a thing, as I’m kinda mixed on that too, which wasn’t in the original story either.

Regardless, the animation was good, and when it finally gets to the “Killing Joke” story, it becomes a good adaptation, and disregards the beginning.
One of my favorite parts is when Batman views different famous Joker events on his computer screen, each one referencing numerous Batman stories/movies/cartoons, making a nice easter egg. 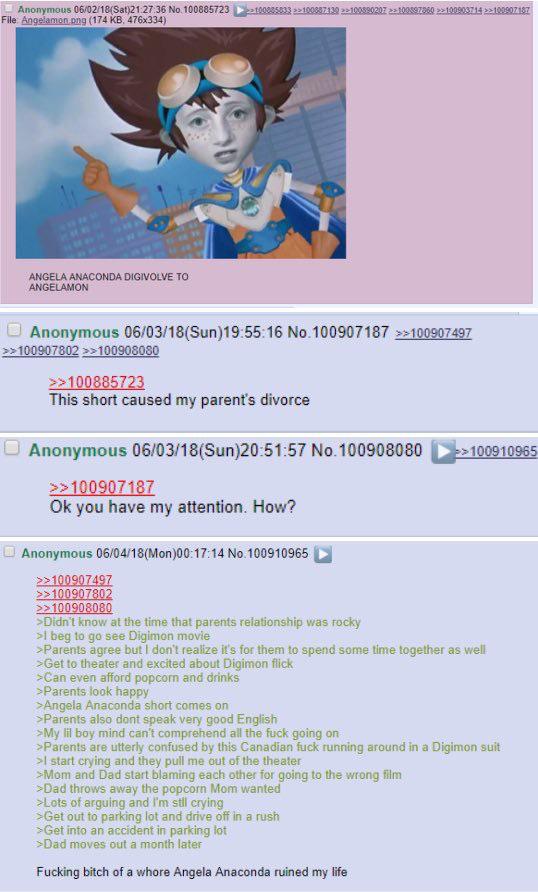 I II II L
I used to think season 2 episode 4 was the best episode of She-ra: Princesses of Power. But I just finished watching season 4 episode 9.

You know, I completely forgot that Angela Anaconda was ever on Kablam. Remember watching the show, but don’t remember any Angela Anaconda shorts. Hell, when you mentioned it, I thought you were mistakenly thinking of Life With Loopy.

Don't
Get up and Jump

Passionate opinionator
I want to watch all of the OG Tiny Toon Adventures and Animaniacs episodes so I can get ready for their revivals. I did get a head start on the Animaniacs revival though and I like it so far. But jeez, I hope the rest of the cast shows up. We all know the old show was more than just the Warners and Pinky and the Brain.

Also, while I know that Freakazoid is the only Steven Spielberg cartoon left out of the bunch to get a proper revival, I did hear that Freakazoid has returned in some form! But…well….let’s just say seeing Freakazoid return was a monkey’s paw wish.