Passionate opinionator
@TheHappySpaceman
Adult Swim better change their minds soon!
@Dex Stewart
All of this fanart proves that Pibby is too good of an idea to pass up on.
Posted 10 months ago Report
Link Quote Reply 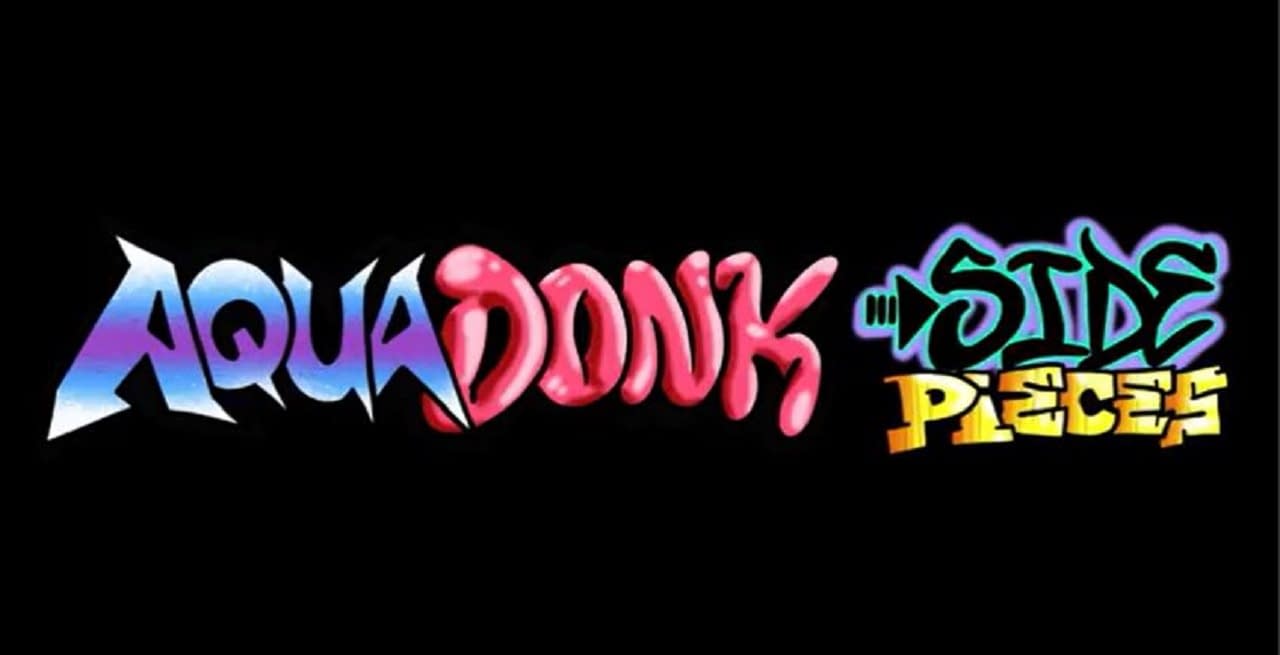 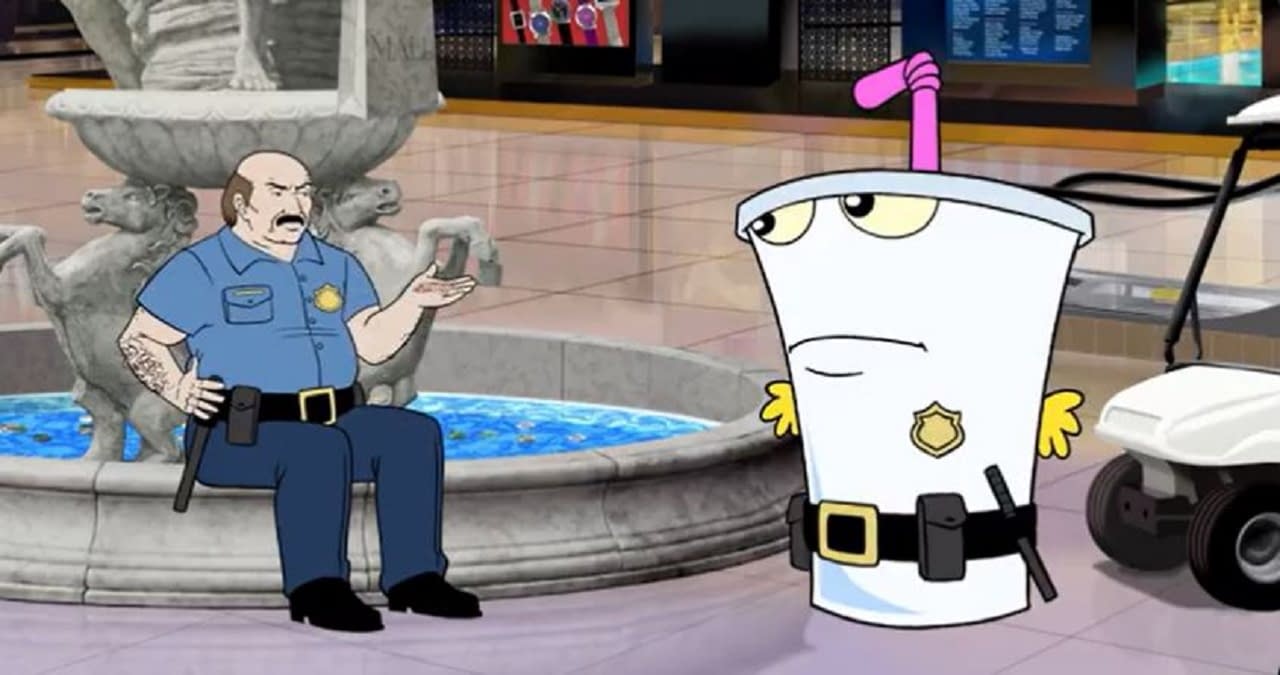 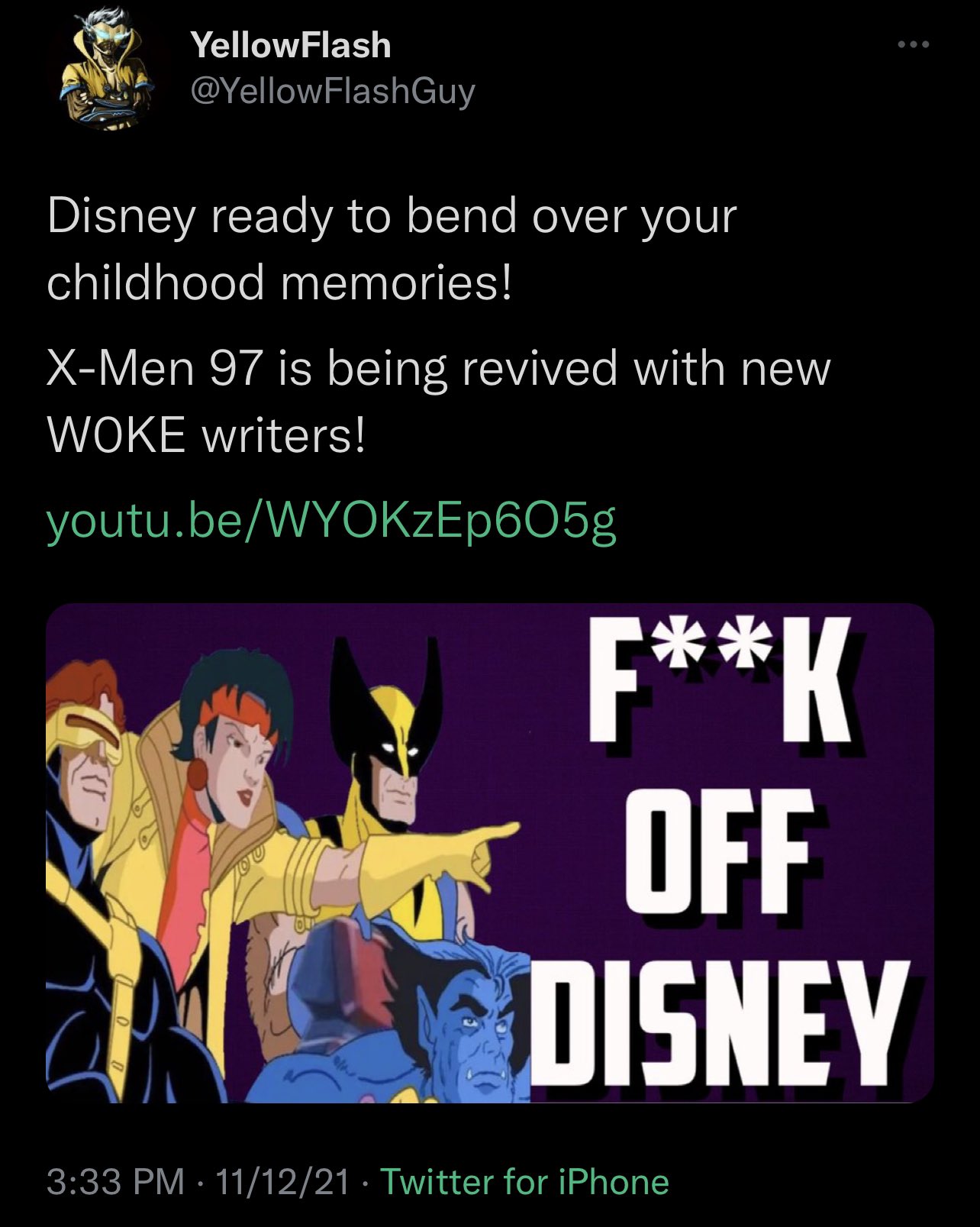 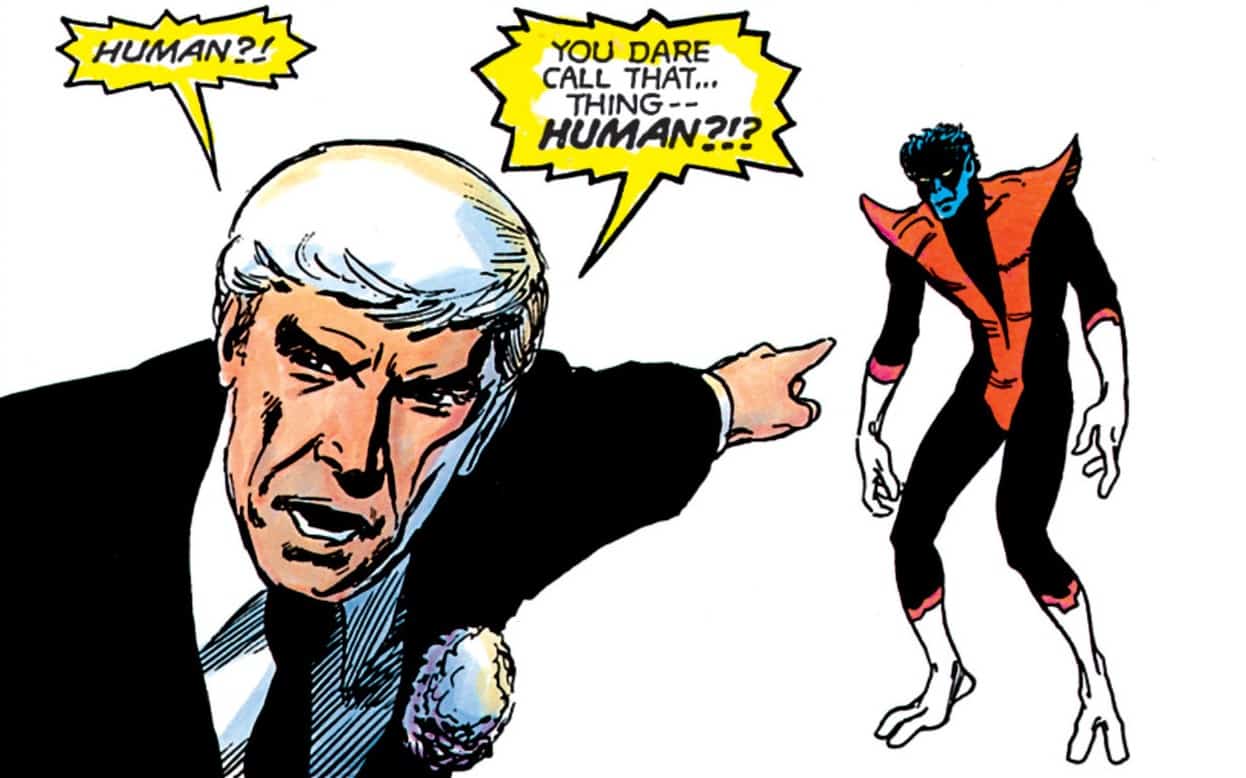 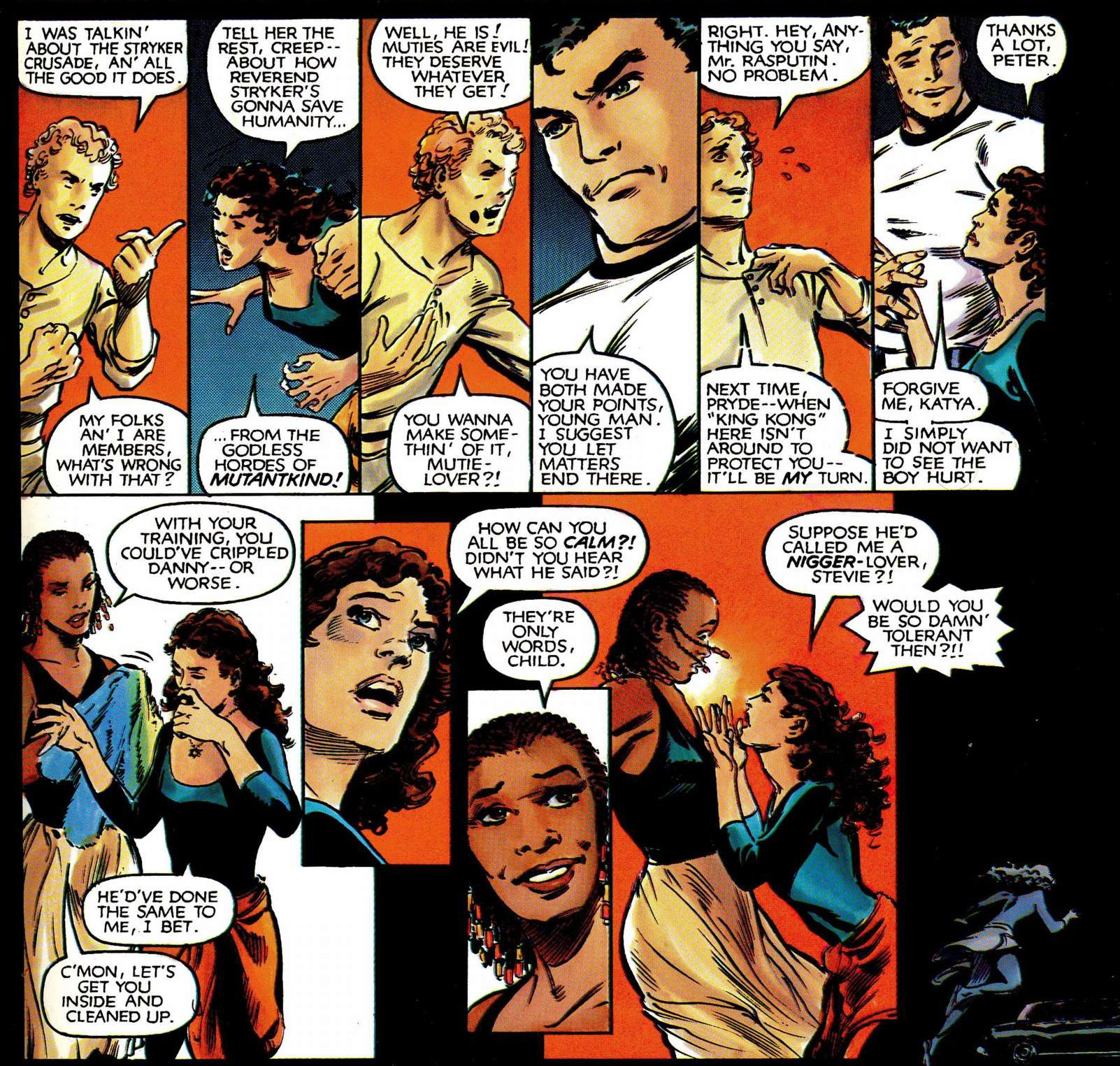 @Dex Stewart
X-Men Series literally had an episode where a abuse victim grew up to found a hate group targeted at his abusive father’s demographic and then pointed out how quickly his own bigoted group threw him under the bus when they found out hiosparents were from said demographic then had him being left at the mercy of his abusive dad as a karmic punishment, and made it very clear this was a good thing, the show was militantly anti bigot,
Posted 10 months ago Report
Link Quote Reply

Est. Late 2010s
@northern haste
Oh God, he better NOT jinx it like people did to… other shows that got hate for the same reason.
Posted 10 months ago Report
Link Quote Reply

Dogs
@northern haste
I’m like 80% sure the X-Men were created as analogues for gays. As the years went on they became metaphors for minority groups in general.
Kinda late with that”woke” realization there.
Posted 10 months ago Report
Link Quote Reply

Broken Ball of 💽TM21
@Dustcan
It’s supposed to be universal themes that can’t be applied to any one issue.
Posted 10 months ago Report
Link Quote Reply

Ocs,Boops,Tickles&Memes
@Dustcan
slight correction, they were created as an analogue for the civil rights/black rights movement back when they first came out, then later on it became a metaphor for minority groups in general.
but yeah, amusing to see people getting pissed about x-men being “woke” when it was already “woke” from the damn start
Posted 10 months ago Report
Link Quote Reply

CHS, Class of 20XX
@northern haste
I couldn’t care less about the writers’ politics. I’ve been burned by enough reboots, remakes, and “sequels” that I’m treating this new series with utmost skepticism, and I’m surprised more people aren’t doing likewise.
Ninety percent of everything is crap, as the saying goes, and when you’re reviving a property after 20+ years you are, by necessity, rolling those dice again.
Posted 10 months ago Report
Link Quote Reply 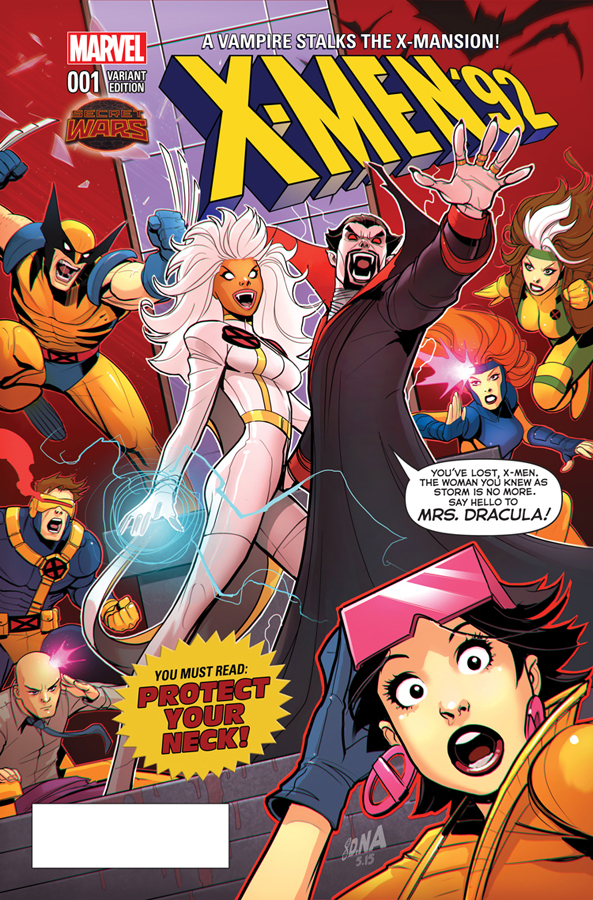 Also X-Men cartoons have a good track record. Not the animes, though.

Tensa Zangetsu
@northern haste
Bro, the X-Men started out as a metaphor for the civil rights movement, before becoming one for minorities in general.
It was “woke” to begin with, and I’m pretty sure the cartoon was as well.
Posted 10 months ago Report
Link Quote Reply

Ecto-Phase,Activate!
I wanna post Xmen cartoon stuff now.
Here’s one of my favorite episodes from Wolverine and the X-Men.
In it, Warren Worthington,Angel, has some issues with his father. His father is ashamed that his son is a mutant. After an argument Angel spreads his wings and forcefully announces that his wings are “…NOT a disease!”
He’s in an accident soon after. 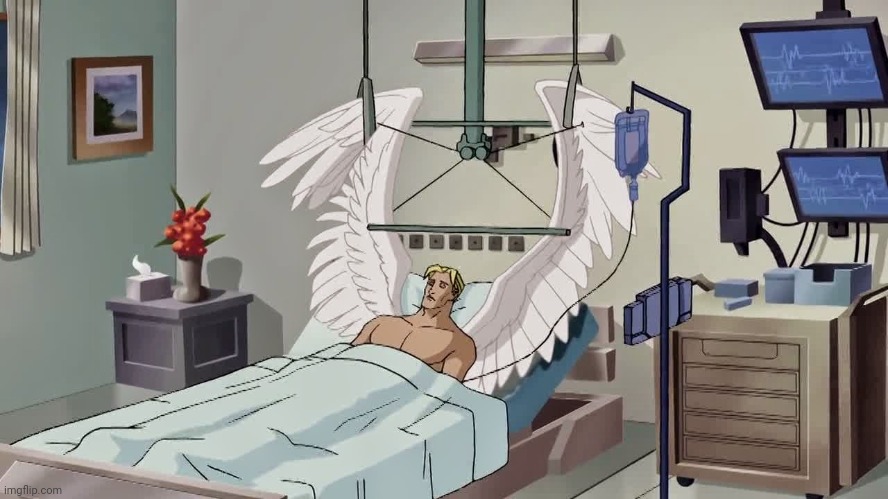 The doctor tells Angel’s father they can save him easily, but the wings they wouldn’t know. “We’d have to bring in an avian specialist…” His father responds, “Save my son…but not the wings.” 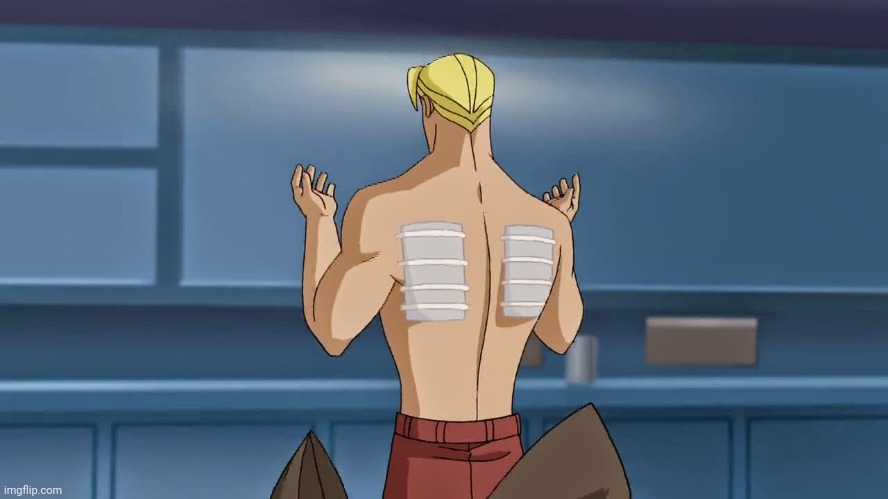 Angel goes to Hank McCoy, Beast, who informs him that he can’t help him. “At this point, it’s like regrowing a limb…”
Posted 10 months ago Report
Edited 10 months ago
Link Quote Reply

CHS, Class of 20XX
I gotta say though, I always thought it was funny that they tried to position the X-Men as a civil rights metaphor. Like, if Harvey Milk started melting people with his mind, we’d be having a whole different conversation about the LGBTQ community, all right?
Posted 10 months ago Report
Link Quote Reply 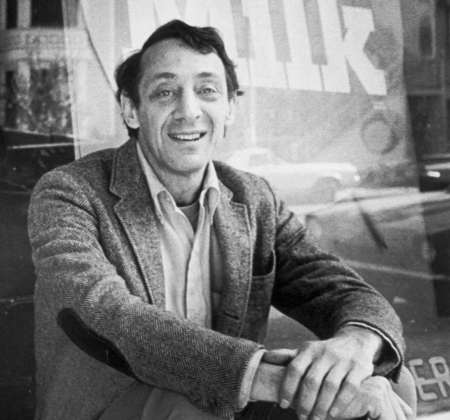 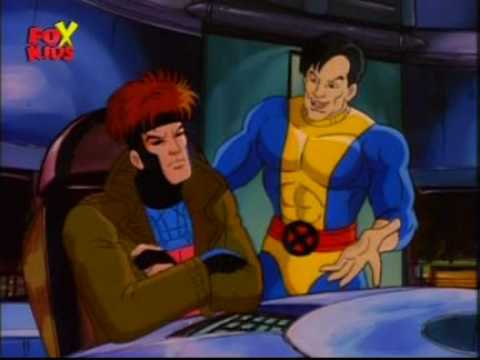 Crossover Specialist
The art and the animation in the Proud Family revival looks vibrant and good.
Posted 10 months ago Report
Link Quote Reply

The myth the X-men was always about ‘x-group’ was always made up by the same people that believed everything else should be there
“It didn’t matter if you were apart of the white race, brown race or whatever” I.E. The X-men were to represent the social outcasts. Like the people that gravitated towards comics who sanded all walks which was reflected in the .
People say Prof. X and Magneto were MLKjr and Malcom X respectively. Which would mean you’re saying Malcom-X was a supremacist extremist. Especially since Magento wasn’t known to be a holocaust survivor until much later
Well, now seeing the comics. They usually right them to appeal to their ego with how the character checks boxes to make up for a personality and stories that go no where.
Even if you really wanna say they are to represent some group, then you’ll have to acknowledge that Prof. X as well as all them will gladly turn away anyone that isn’t like them.
What does that say about that group then? Close-minded? Bigoted? The only time they allowed non-them on their private, segregationist island was just for Prom and only a handful were allowed.
Even with all this, the way the comics go is; Magneto was right the entire time.
I know it’s a lot to take in then a 140 letter tweet, but at least try.
Posted 10 months ago Report
Link Quote Reply

🔥Sunset is best girl🔥
@Cyborg_pony
bro do the world a favor

we get it. you’re a racist little weasel.

Tensa Zangetsu
@Cyborg_pony
Dude. It’s literally been stated many times before that the X-Men were an allegory for the civil rights movement.
Also, Jonathan Hickman’s current run on the series has nothing to do with the discussion.
Posted 10 months ago Report
Link Quote Reply

@Penguin Dragneel
We’ll see. It’s obvious this is Nostalgia bait with desperate considering how many, many other “reboots” have gone and how
Ghostbuster
Terminator
Star Wars
Captain Marvel
shera
Mulan
Doctor Who
Rainbow Brite
Care Bears
Dishonored
Mass Effect
Charlie’s Angels
Thundercats
He-man
And probably so more I’m forgetting (because they were easily forgotten)
A lot of these things have a lot in common, and all of them failed. Especially since no one can refute me other then the typical bigotry. Because you know. They hate anyone including and especially people not of their skin color who don’t let them decide on their behalf.
And come 2023, I’ll be here to see how the Typical response happens

DW doesn’t reboot it gets new leads. And despite doing this 14 times now I’m going to guess you only have a problem with the 13th Doctor.

That wasn’t a reboot that was a Disney Live Action Adaptation. A whole different kettle of fish and it’s own separate category of bad.

M8 it’s been like 4 years since Andromeda and I’ll bet you still haven’t played or gained a further grasp on the thing beyond “muh pre-release Annie-May-Shuns”.
Also, not a reboot.

The first Thundercats reboot was pretty good. It only died from lack of interest, and that’s largely because CN was winding up for its “Shill one show and one show alone” years. And Thundercats was not that “one show”.
Posted 10 months ago Report
Edited 10 months ago
Link Quote Reply
Interested in advertising on Derpibooru? Click here for information!