Enter if you dare
@Dex Stewart
I think it’s just Betty that’s gay now.
so far it’s just been her saying she had a girlfriend and joke about Dee dee’s clothes she made possibly turning someone gay
Posted 4 months ago Report
Link Quote Reply 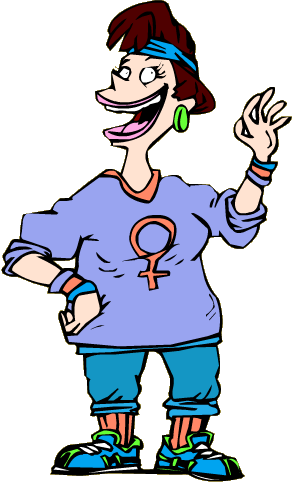 Ecto-Phase,Activate!
@northern haste
When I was little,my sisters were into Rugrats, but I was completely disinterested. I watched some of All Grown Up but I only remember one thing from it.
Chucky had a crush on some girl,and says it’s like she doesn’t even see him. She comes over,asks the others if his chair is taken. Before any kind of reply,she drags off the chair with him still in it.

@Dex Stewart
If it is the last one…well you know.

If Blue and Magenta should be lesbians and Muffy Munching Francine’s muff is something they demand. The point to stop has been crossed.


@Dex Stewart
Loud, acts tough, likes sports. Ironic how a stereotype from a 60’s conservative of what a lesbian is, is now progressive in current year.
Posted 4 months ago Report
Link Quote Reply

Sweet F.A.
Unpopular opinion: I never liked Rugrats. Perhaps it was just a little too before my time, or perhaps my younger self’s dislike of babies was to blame.
Posted 4 months ago Report
Link Quote Reply
phoenixacezero

@TheHappySpaceman
fair enough. Was there any thing that suits your taste?
Posted 4 months ago Report
Link Quote Reply

@Dex Stewart
If Blue and Magenta should be lesbians and Muffy Munching Francine’s muff is something they demand. The point to stop has been crossed.

Blue and Magenta are the puppies from Blue’s Clues,right? Who was looking at this extremely young-schewing show deep enough to assume anything about their sexual preferences? I didn’t even know Blue was a girl. Or Magenta for that matter.
I do know Arthur,and can say a hundred percent, Francine and Muffy were into dudes. Francine crushed on Arthur,more than once in fantasy sequences,and even in just straight up flash-forwards to the future Arthur and Francine are married. Yeah,sure maybe she’s bi,and so could Muffy. Muffy would make more sense to me though,since Francine was so obviously for Arthur. Besides,Fern is RIGHT THERE. She’d make a great lesbian. But I guess she’s not a main character often enough.

Who was looking at this extremely young-schewing show deep enough to assume anything about their sexual preferences?

Very desperate people. Also, They’re cousins according sources, and them crushing barely matters since in several shows that was a thing, until the few moments of the show. I’d bet in a Doug reboot, Patty and Bee-bee would be dating.

@Cyborg_pony
Depending, which one which, because they all act the same to me.
Posted 4 months ago Report
Link Quote Reply

@phoenixacezero
I’m not sure what you’re talking about and I still agree.
Posted 4 months ago Report
Link Quote Reply

Sweet F.A.
@phoenixacezero
Anything about the show, or just anything in general? I think I was born too late to get the appeal of Rugrats, plus I didn’t see it until I was older due to not having cable.

I didn’t like the show, but the “I’ve lost control of my life” gag was pretty funny.

One of the best moments in cartoon history.
Posted 4 months ago Report
Link Quote Reply
phoenixacezero

Fluff Appreciator
@Background Pony #AC92
For all the good that’ll do either thing.
Posted 4 months ago Report
Link Quote Reply
Interested in advertising on Derpibooru? Click here for information!