Forums » General Discussion » Ask the mods anything Search Posts
Started by Princess♥Cadance
Posted 3 years ago
17946 replies
Subscribe
Cosmas-the-Explorer
Tagger of the Unknown
@moonchosen
A lowlife degenerate who doesn't take any precautions to make sure he or others doesn't get Covid. This includes someone going to a crowded place where people are only inches away from each other not out of necessity but for fun. And also not wearing masks in public. They lack any sense of responsibility.
Posted 8 days ago Report
Link Quote Reply

Twiface
Equine Ear Enthusiast
Do the mods on this site have scheduled shifts, or do they just come in whenever they feel like it?
Posted 8 days ago Report
Link Quote Reply

Communist Starlight
Crushing inequality
When something is reported, do you guys get called or something?
Posted 8 days ago Report
Link Quote Reply

CaptainXtra
El Paso Resident
I was wondering why sometimes the mods take awhile to respond and deal with a racist or gore spammer.
Posted 8 days ago Report
Link Quote Reply

Site Moderator
Jolliest of Alicorns
@Communist Starlight
We have a report queue.

@CaptainXtra
Some things take discussion to deal with. And other times a mod may not just be around to deal with it.

other times a mod may not just be around to deal with it.


So there are times when the mods are "asleep" and we can post ponies under their noses? 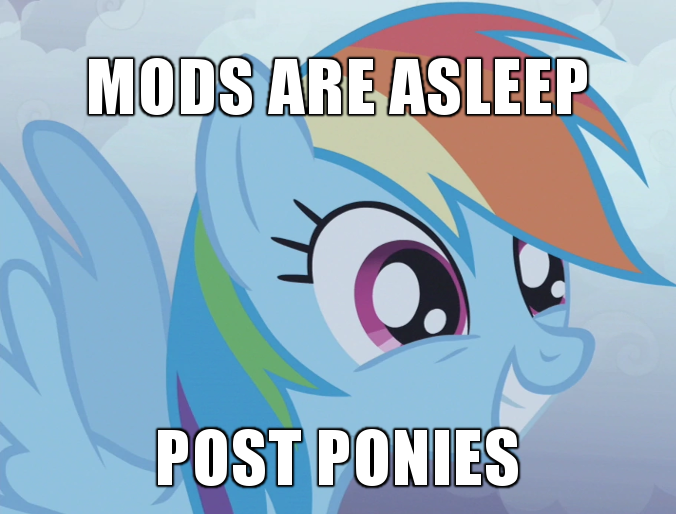 Site Moderator
Jolliest of Alicorns
@Jaredking203
Please report next time, this thread is not for site policy and help.
Posted 5 days ago Report
Link Quote Reply

The Game Lover-Fan
@Mikey
But I did report the image, twice.
Posted 5 days ago Report
Link Quote Reply

Site Moderator
Jolliest of Alicorns
@Jaredking203
I didn't see it in the reports.
In any case, please have patience. Mods can't be on all of the time.

RIP Jamir Garcia
What Philosophers has the most annoying fanbase ever?
Posted 5 days ago Report
Link Quote Reply

@Count Adramélekh Sear
Nietzsche because countless edgy teenagers who don't understand him quote him out of context.

I could actually tolerate a legion of angsty teens but then he also had this one particularly awful fan who was worse than all of them put together. Some failed painter a while back got some wacky ideas Nietzsche, himself, would have disavowed inspired by that whole übermensch concept. Then he killed millions of people and started the bloodiest war in history.

Say what you will about Nietzsche, but that one fan of his was pretty cringe.

Site Moderator
Jolliest of Alicorns
@Background Pony #91Z0
Well, maybe. Look at the badges thread to see if there's any you wanna try to get.

@CaptainXtra
That's a question I'm not sure I have the answer to or would be willing to if I did.