2668x1500 WEBM 9.5 MB
This image is blocked by your current filter - click here to display it anyway

BlazeHeartUnicorn
@Joseph Raszagal
A few reviewers tend to point out how the songs tend to get drowned out by the dialogue throughout the film, but their was a soundtrack of it released and you can hear the songs free of the dialogue on YouTube

Here is Sun Do Shine for example https://www.youtube.com/watch?v=A9d_5eAL2ww performed by late Glen Cambell

BlazeHeartUnicorn
@Dirty Bit
AniMat did a review of it a while ago too, he wasn't to kind to it either.
Posted 8 months ago Report
Link Quote Reply

Pants will be banned
@Dirty Bit
When I was young, but yes I remember watching that.
Posted 8 months ago Report
Link Quote Reply

Looked up a funny video searching for that line.

Weeeeeell, the Nostalgia Critic busted the movie's balls himself in his earlier videos, making a joke about how Christopher Plummer (The Great Duke of Owls) was forced to participate.

I'm sure there are some decent reviews somewhere.

Emily Brickenbrackle III
@Dirty Bit
I can't really remember the soundtrack, but given the name I hope that the music in the film at least holds up. Has anybody on Youtube done a decent review of it?
Posted 8 months ago Report
Link Quote Reply

Oh, it was, at times. First saw it on TV when I was younger than you, so I couldn't fully appreciate it. Or the fact that Eddie Deezen was Snipes; all I heard was Mandark after rewatching the film

Emily Brickenbrackle III
@Dirty Bit
Titan A.E. was a lot of fun, but I distinctly remember hating Rock-a-Doodle back when I was… like… a 10-year-old or something. It's still a pretty film, nice on the eyes and whatnot, but I remember it being rather stupid.
Posted 8 months ago Report
Link Quote Reply

Recently? I watched it again last year, myself. Such a funny classic.

Not to mention other underrated films like Rock-a-Doodle and Titan A.E

Emily Brickenbrackle III
@BlazeHeartUnicorn
If there's one thing Bluth has in spades, it's definitely style. The Secret of NIMH and the original Land Before Time are two of my favorite animated films. Both are absolutely stunning to look at.
Posted 8 months ago Report
Link Quote Reply

@Yet One More Idiot

I'm sure you both are referring to Don Bluth's art style, since he had a hand in both films

BlazeHeartUnicorn
@Yet One More Idiot
I think he means the artstyle, but yes, Aristocats does have the same use of animation thanks to the invention of the Xerox process.

Before 101 Dalmations, animators would have to send their drawings to the Ink and Paint department where the laides (most were hired for the position) would take those drawings, put a piece of celluiod paper (clear) over the drawing and ink by hand with a very thin brush the drawing onto the sheet and then flip it over to paint the color on them.

Well, when 101 Dalmations was in development, along with the finishing of Sleeping Beauty, the Xerox machine was invented that could basically take the animators drawings and transfer them onto a sheet of celluiod paper without having to ink by hand. They had to still paint the color on, sure, but it saved having to ink it on. Also, because the machine did all the inking for them, it left behind this sort of a sketchy look to the films, which is why you can notice in films like 101 Dalmations lines in areas of the animation that look like the animation was still in it drawn faze with lines to indicate where to put the eyes and such. In fact, believe it or not, the animators loved seeing their aniamtions on film this way cause they felt the soft, more fairytale like style in their previous films would hide the animators personality to them and not feel as artsy.

Everybody wants to a pone,
Because a pone's the only pone
Who knows how to own… 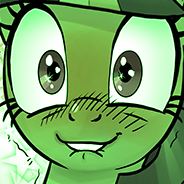 Your real life Luna.
@mjangelvortex
Ah no I hope it wasn't too bad. :c please don't tell me it had anything to do with ponies…
Posted 9 months ago Report
Link Quote Reply

Lady of Ships and Birbs
This guy's animations are so smooth. I was hoping that the Emperor's New Groove animation would be the featured one (especially since it had sound) but this is a good choice too.

@Yet One More Idiot
I enjoyed it too. Not only did I love learning but I got along with my teachers and the other students. Being at school was also a way to avoid abuse at home so…yeah. School is cool for me.

Emily Brickenbrackle III
One of the best comedies ever made. Fuckin'… there must have been a joke every three seconds or something, it was amazing.
Posted 9 months ago Report
Link Quote Reply