Pony with care My Little Pony: Make Your Mark Chapter 2 was just released, so remember to tag images of/about the latest episodes with the appropriate tags
370 504 501 3 324
Subscribe
Galleries
Featured in
Sign in to create a gallery
Related
View VS Download DS
Uploaded 3 years ago by Badumsquish

>When you’re minding your own business at 3am and the immortal princess of the night bursts through your window with Contra, Battletoads/Double Dragon, and Mario 3 :P

324 comments posted
chaotic-7
@Beau Skunky
To me the whole “Contra and Konami” code is such a classic refference that it’s practicaly become the holy grail of gaming.

Luna: Thou shalt not use thine code for cheating of speedruns, lest they have their names stricken from the high score boards. Use thine code for only enjoyment of thine game lest the burden of difficulty becomes to great. Amen.

There is alway the classic collections on digital if young’uns want to learn more.

Not stinky!
@chaotic-7
What if they don’t know what “Contra” is?
My neice was baffled, because a friend of her’s never heard of “Yoshi.” lol


Posted 1 years ago Report
Link Quote Reply
chaotic-7
@Beau Skunky
I know, it’s just most people of this generation aren’t familiar with “the code” reference hence why I referred to it as the Contra code.

But I could totally see that as added comedic affect.

Though, calling it the “Contra” code is a bit inaccurate, because it was first featured in Konami’s “Gradius” first, so most call it the “Konami code.”

@Background Pony #5954
I can see Luna being an NES fangirl. lol


Posted 1 years ago Report
Link Quote Reply
chaotic-7
Luna: Before we begin, we must first give thanks to the code.

Luna and Anon: The code.

Angels are heard singing as the Contra code is displayed above their heads.


Posted 1 years ago Report
Link Quote Reply
Background Pony #5954
Me: Sorry, You Highness, but I’m more of a Xbox pony–

Princess Luna: HAVE YOU NO RESPECT FOR RETRO GAMING?!?!?! I SHOULD PUNISH YOU RIGHT HERE AND NOW!!!!!!!

Princess Luna: Great! That’s all what I wanted to hear.

ᗡ: 📶 📡
@Red-Supernova
Like racks to chain someone to so you can lash them with blood and human remains everywhere, and of course this goddamned thing. Don’t get me wrong, it was all kinds of awesome, but I’m just surprised that got an E XD

@Power-Up&Sky-Blue
I imagine she has everything XD

2 PWNYZ in 1
@Beau Skunky
It wasn’t my favorite retro console, but I loved the graphics on the SEGA Genesis. The sound was pretty good too. Still wish I had gotten the SNES instead, but at least that’s on Switch now.
Posted 2 years ago Report
Link Quote Reply

Not stinky!
@Power-Up&Sky-Blue
I’m sure she has all the retro consoles. Even a few of the newer Classic Mini plug-and-play systems.
(The new Sega Genesis Mini is pretty cool BTW.)

2 PWNYZ in 1
You ever wonder if Luna has a Neo-Geo system?
Posted 2 years ago Report
Link Quote Reply

Not stinky!
@Red-Supernova
The ESRB is confusing, the N64 version of “Ocarina of Time” has red blood stains in the Shadow Temple, (and on the Dead Hand miniboss) and earlier copies featured red blood spatters when Ganondorf “coughs up,” and when Link delivers the “final blow” to him. (Though, the red blood was edited to green for these two parts only in later cartridge copies, and rereleases.) and still is E-rated.
The 3DS version left that out, and gets E-10 rated.

Passionate opinionator
@Beau Skunky
I dunno, even the more foreboding parts of Earthbound are still not as intense as most other T-rated games. Then again, I see a lot of classic games get re-rated with the Teen rating so I guess the rating doesn’t matter as most grade school kids are allowed to play Teen rated games anyway.
Now the Undertale series, which is inspired by the Mother series, has more suggestive content than the games its paying homage to and yet it gets an E10 rating. ESRB ratings can be weird at times.

Aside from the blood, everything else to me sounds like standard intimidating dungeon fare. Now if there were torture devices that are commonly used in gore-fest movies, that would be ballsy.

I was there when Super Fluttershy Land 2 debuted along with Pony Poki Panic. God, that was magical.

Not stinky!
@Red-Supernova
Maybe, but some do think the T-rating is suiting, given some of the game’s darker content, scary atmospheric cave/night music, and such. (Not to mention, the final boss.)

There’s racks surrounded by blood stains in the Shadow Temple, chains on walls, not to mention, skulls, spike traps, blades, and such everwhere.

I remember A Derp to the Past. Hehe one of the first brony ROMhacks. (Along with Super Fluttershy Land 2.)

Passionate opinionator
@Beau Skunky
I’d still stand by that I think despite what Earthbound got away with, I think an E10 rating is more fitting. Now Mother 3 on the other hand is more deserving of the Teen rating.

@Badumsquish
What kind of torture devices are we talking about here? Its been decades since I last played OoT.

@Beau Skunky
If I remember correctly, we have a Link to the Past Romhack that has Derpy as the protag.

ᗡ: 📶 📡
@40kponyguy
I’m eager to see what you do with it. I’m doing my own take on a creepy shopowner who deals in illegal, dangerous, and outright cursed or supernatural wares, and while she herself is going to look and act more like Renon from Castlevania 64, Leland Gaunt from Needful Things, and Mr. Dark from Something Wicked This Way Comes, her shop is going to be more like the Curiosity Shop from Majora’s Mask :D
Posted 2 years ago Report
Link Quote Reply

ᗡ: 📶 📡
@40kponyguy
Closest I ever got were the Floormasters, but they’re not even unique to that temple :P
Posted 2 years ago Report
Link Quote Reply 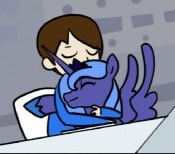 Not stinky!
@northern haste
Maybe, but people still do Sunset as Link, and such though.

I think I’m still the only one to do a pony crossover with anything to do with the Shadow Temple.

ᗡ: 📶 📡
@40kponyguy
Like, I’m amazed they got away with the Shadow Temple in an E for Everyone game. Like, spattered blood and torture devices and giant living severed hands and zombies and the freaking DEAD HAND. Like, holy crap. I remember totally taking it for granted too XD

@northern haste
That’s a thing even to this day. All the gore in the world is allowed if it’s green, or “oil” or what have you XD

Not stinky!
@northern haste
Some enemies also spurt blue blood.
Red blood was only featured when Ganondorf “coughs up,” and when Link preformed the “final blow” to Ganon at the end of the game. My old grey N64 cartridge still features the unedited blood, but later copies, and rereleases (including the 3DS remake) changed it to green blood instead. Which actually might make that one Ganondorf moment a li’l grosser. Now it just looks like puke, instead of a dramatic injury.

As for age ratings being inconsistent, let’s not forget back in 1995 (after Nintendo of America abandoned it’s strict censorship policies) “EarthBound” (Mother 2) was appropriate for an E-Everyone ESRB rating, (back then it was “K-A: Kids to Adult” though) but nowadays it’s “T-Teen” rated. Which is actually kinda understandable, because despite the game’s cute simple retro game graphics, it got away with ALOT.
Like it had some references/jokes to flatulence. (An NPC even flat out tells you he even farted) The word “crap” is uttered a few times, which was practically a cuss word back then, so I’m amazed NOA let Dan Owsen use that word when localizing.
There’s even uncensored red blood, and blood stains appear on some enemies, (like the Krakken’s teeth, or Mondo Mole’s mouth/claws) and the ESRB missed all this back in 1995. And other suggestive/subtle things, and not-so-subtle things like an enemy named “The Big Pile of Puke.”
Not to mention, the game’s famously mysterious, and creepy final boss.
EarthBound got away with alot.

Enter if you dare
@Beau Skunky
Age ratings are always inconsistent.
As I recall even the N64 version had blood taken out. Apparently green blood is all fine