7 comments posted
Background Pony #EBEE
These magazines might not even be canon.
Posted 9 months ago Report
Link Quote Reply

This cykas my blyats
@Background Pony #A5D9
You say that, but my dad was dirty blonde with blue eyes, and my mom had black hair and green eyes, and I came out with brown hair and brown eyes, genetics are fucky like that.
Posted about a year ago Report
Link Quote Reply
Background Pony #1C27
guys! if babs uncle and aunt are the oranges, that means she ISN'T their child.

I couldn't find any pictures of this magazine completed, but if it's saying that they are her uncle and aunt, that that means her parents are not them.

Plus, lets say for a second that they are her parents. One, she has green eyes, both of the oranges have blue. It's not impossible but the child is more likely to have blue eyes.
two, she has freckles and neither of them have freckles.
three, she has a dark brownish-orange coat, their coats are yellow.
And finally, their hair both have lines in the and babs lacks lines in her hair. Also, her hair color is neither of the oranges hair styles.
So it's unlikely that they are her parents. 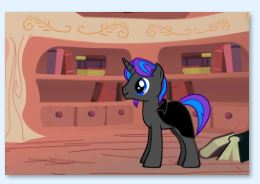 PitchBlack
Saddle Arabian Nights
And that's why she's orange!
Posted 3 years ago Report
Link Quote Reply
Background Pony #D489
Yet in the past, they said she wasn't related to
them.
But now they say they are related?

Don't test my slam jam
Nothing new there. But what is this from?
Posted 3 years ago Report
Link Quote Reply