83 comments posted
Background Pony #AB27
At least I'm calm knowing that I'm not the only one who hates flash … and that most of them are aware of that.
Posted 5 months ago Report
Link Quote Reply
Background Pony #DA1E
if only the writers mixed the 3 characters we could have a more complete character
instead of just
a boring rocker
an annoying but fun fan
and a … uh … a presumptuous camper?

>the cheapest impersonation of Edward Cullen there is

Lord of the Empty Seat
@Poptard
I wouldn't say he's been kicked to the curb, considering they bothered to give him a small role in one of the last summertime shorts, small bits of character growth have been given to him here and there throughout the movies and the shorts.
Posted 2 years ago Report
Link Quote Reply

I remember ages ago in internet history, when the first EQG came out, both Flash and Sunset were the fandom’s punching bags. Flash for the reasons you said, but Sunset wasn’t liked either for being another twilight-powered unicorn, just acting like a stereotypical alpha bitch, and nobody taking her easy redemption seriously. Both were, as you said, a mess of cliches, but I took a liking to both of them, because I saw the inklings of interesting characters underneath the rubble. I’ve been here since season 1, and I’ve seen the fandom so far more with far less.

Then the next sequel came out, and Sunny got her arc and screentime, and fans loved it. It seems like the staff finally learned their lessons… except they chose not to do anything with Flash, really. Didn’t he get around 4 minutes of screentime there? Anyways, sequel and miniquels and comcis came out, and it was kinda frustrating to see that character left behind in development, when Sunny is EQG’s waifu and people forget she used to be in the same gutter as Flash. Sure, he’s been kicked to the curb by the writers for now, but whenever anyone says that Flash never had any potential yet praises Sunset Shimmer probably forgot their history.

Sciencepone of Science!
@darknessRising24
I think what makes these characters so interesting is we get a small hint of their personality and people have fun building the rest.

Being a cool dude, meeting Twi by bumping into her and instantly having that cliche "love at first sight", wearing a leather jacket and playing guitar all kind of paint him as very much a "Ken", and make him a pile of cliches.

There's a lot of things people can like a character for, and Star Tracker had massive appeal because, as other commenters have said, they found him very relatable.

I'll bet you fifty bucks nobody here is a Ken-type dudebro who wears leather jackets and plays the guitar and was a popular kid at high school.

But I'll bet you fifty more that something like half the Twilight fans at least see a good bit of themselves in Star Tracker — fan of the pony, somewhat socially awkward, and probably somewhat self-conscious about it.

Lord of the Empty Seat
@Background Pony #5A03
Exactly, if we can make all those characters genuinely interesting than Flash isn't a lost cause.
Posted 2 years ago Report
Link Quote Reply
Background Pony #5FF1
@darknessRising24
>Linking yourself
>an episode that was more a celebration offandom

Lord of the Empty Seat
@Background Pony #5A03
One: Watch "Slice of Life"

Two: Check the link I put up earlier.

Lord of the Empty Seat
@Spiritus Arcane
It's gotten to a point where they've called attention to the character's ancestor, it may not be a direct appearance but at least it's somethingm
Posted 2 years ago Report
Link Quote Reply

@Background Pony #8283
Be that as it may, it still kinda undermines the point of a character not being MIA…by posting a pic of character that isn't them.

Granted pony Flash hasn't been absent for 3 seasons. At the very least, I think his last cameo was in The Crystalling, so 1 season max.

Lord of the Empty Seat
@MLPFiMFan2232
Awww, that's so cute! You think you can somehow influence the show! 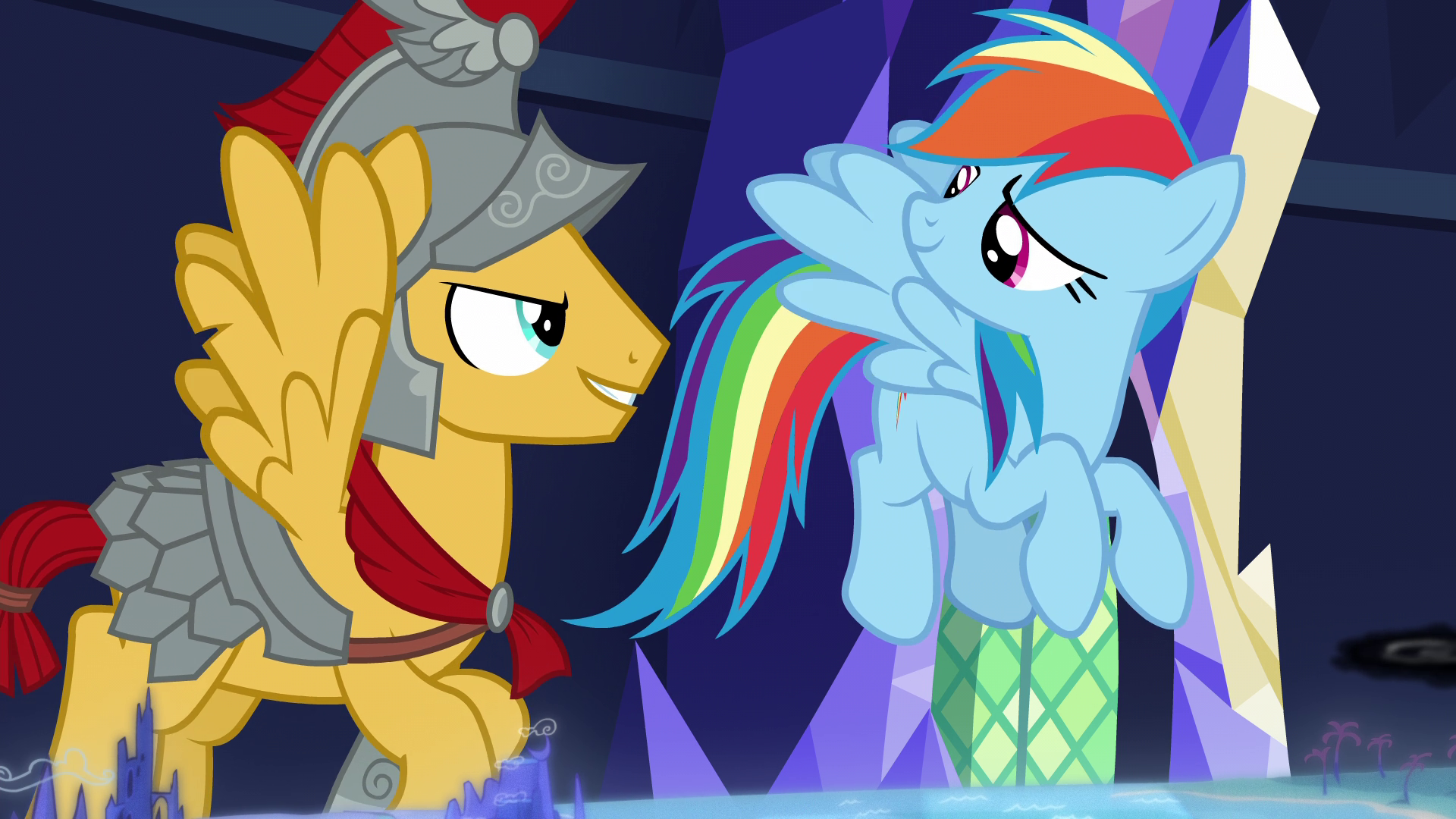 This is going to be my last comment on this cause I'm sick of dealing with it, but before I go I have one last thing to say on this topic. As far as the show is concerned, they heard to outcry and since he's been MIA for the last 3 seasons as far as we know pony Flash Sentry is gone and unless Hasbro says otherwise he's never coming back. We 'haters' got rid of him. Goodbye.

Lord of the Empty Seat
@MLPFiMFan2232
The fact that you can't even be bothered to come up with a decent defense and simply stick to petty insults pretty much proves how lazy you are.
Posted 2 years ago Report
Link Quote Reply
MLPFiMFan2232
@Background Pony #8283
Go ahead keep sticking up for the cheapest impersonation of Edward Cullen there is.
Posted 2 years ago Report
Link Quote Reply

Lord of the Empty Seat
@MLPFiMFan2232
Twilight became a human the moment she went through the portal, it would only be some form of bestiality if she were still a pony when she was with human Flash. So that argument is null and void.

As for his pony self doing "absolutely nothing of note", let me remind you that as Bronies we’ve been nitpicking small aspects of several characters and giving them their own personalities since the show started:

We took Derpy’s animation error and her saying "muffins" once and make her a clutz who’s obsessed over the food.

We made Lyra a human-obsessed conspiracy theorist based on how she sits.

We took a DJ with a two-second cameo and made her a party animal who’s dating that one mare from the Gala episode.

And we made Berry Punch an alcoholic based on her drinking directly from a punch bowl.

So to whine about Flash being bland is not only lazy, but also hypocritical. Heck we add aspects and traits to main characters like Rainbow Dash, Luna, Scootaloo, and Sweetie Belle. Everyone assumes that Scoots is an orphan, Sweetie Belle is Button Mash’s special somepony, Luna is a binge gamer, and Rainbow Dash is a lesbian with a cider addiction. If we can nitpick and speculate about various characters in the franchise and give them their own personality or add onto their character then Flash is no exception. Him being "bland" is just a petty excuse used by lazy hypocrites who are too stubborn to be imaginative when it comes to this character.

At this point you're just grasping at straws.

Flash-haters only care about problems.

Posted 2 years ago Report
Link Quote Reply
MLPFiMFan2232
@darknessRising24
The fact is this show didn't need a male version of Princess Elise. By the way that ship also promotes some form of beastiality. And pony Flash has done absolutely nothing of note. All he is in the pony universe is just another one of Princess Celestia's storm troopers.
Posted 2 years ago Report
Link Quote Reply