The 2020 Community Collab is posted! Thank you to everyone for submitting over 1600 characters to this years collab! Click here to see it!
17 33 29 4 1
Subscribe
Galleries
Featured in
Register to create a gallery
Related
View VS Download DS
Uploaded 2 years ago by FarewellDecency

"Can I see yet?" Incandescence was impatient. Always had been. Now more than ever.

"Don't worry, I'm almost done!… I think!" Wayfinder wasn't the most familiar with makeovers. Oh, who was he kidding, of course he was. Rarity was his mother, for Celestia's sake. He just wasn't familiar with doing them himself. Not that anypony else should know that, no.

Incandescence had never put on makeup before. Her mothers weren't big on it, and her dad definitely wasn't. She knew Rarity okay but it was a hard subject to bring up to the older folks. Rarity's son, however, was someone she could talk to. If he hadn't told her to stop talking while he was working on her lip stick.

Occasionally the light breeze through the open window would knock Incandescence's crystal chime, but really the only sound in the room was the breathing of the two teens, and the light clack of a different eye tool when Wayfinder would change his mind on how he wanted to do her lines.

Wayfinder cautiously turned her around to face her own mirror, hooves shaking against her shoulders. He wasn't used to criticism and he definitely wasn't good at handling it when it was bad. He also wasn't used to friends so he didn't want to lose the one he just got.

"Do you like it, Candy?" Wayfinder nervously prompted. For maybe the first time, he actually wanted the criticism. He wanted to be good enough. At least, for her.

"I… Look how pretty I am.. I.." Incandescence couldn't break her own eye contact. For once she wasn't gagging at herself in the mirror, at her extra pudge, at her square jaw, at her unlined eyes. She didn't feel sick. She didn't feel like everything was over before it started. She felt pretty.

"I mean, you're always pretty, Candy. Always." Wayfinder kept his hooves on Candy's shoulders, keeping her steady. Or keeping himself steady. He honestly wasn't sure, but they were staying up, so the hay with it, it was working.

Wayfinder could feel his own tears building up, even though he was trying very hard not to start them up in the first place. He was fine with crying, as his mother had taught him well, but crying is a sympathetic reaction. When one pony starts, so can the next.

"C-careful… you.. y-you don't wanna bleed your liner, there." He sniffed, fanning her eyes for a moment trying to help Candy's tears from building up black in her eyes.

Sooooo I mentioned in a journal about Flambé awhile back about how Wayfinder was one of the first ponies to really help her in her transition. And after I made a poll where I asked y'all to pick a pony and these two landed on the top, I decided to flesh out that scene!

Here, both Flambé and Wayfinder are in their teens. (We'll say, like, 13 in human age) This was when Flambé was first really starting to transition. She was still kinda chubby, her hair was just starting to grow out, and she was still fairly masculine in terms of body shape. Wayfinder was a beanpole that had no idea what to really do with his hair, aside from pull it back.

Flambé and Wayfinder honestly helped each other. Wayfinder helped Flambé find an image of herself that she was legitimately happy with, and Flambé helped Wayfinder discover how much he loved make-up and makeovers and that a love for those things doesn't really change him and helped him learn gender is more self-defined. Without each other, they wouldn't have grown to be who they were supposed to be.

Characters featured:
This image is blocked by your current filter - click here to display it anyway 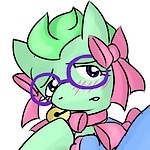 Love the story too.