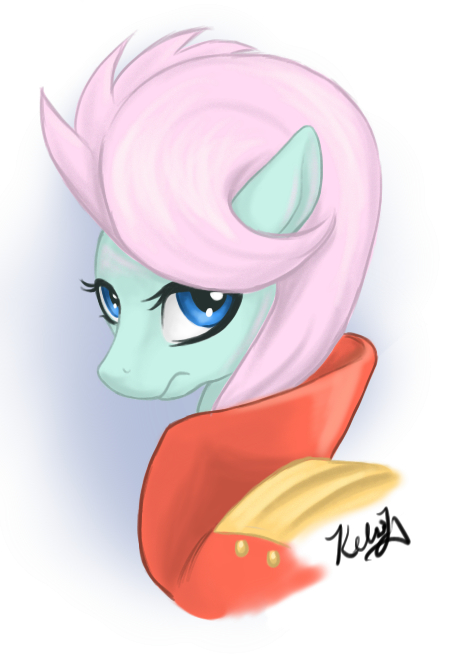 Pinkbeardedpony
Truth's Deathless Voice
@TexasUberAlles
I am sorry if our little debate has caused you any amount of vexation. I feel that I am far and above more polite when it comes to this sort of discussion than three-quarters of the other members of this site, but I sometimes slip into a disrespectful tone despite my best efforts. Mea culpa.

I feel that we have both raised some interesting points regarding pony arms and tactics, so why not agree to disagree? Furthermore, we have both acknowledged the superlative quality of Asimos' artwork. Marring such a piece with armchair speculation does it a disservice, especially when I can chock up any perceived dip in verisimilitude as a mere palatable use of artistic license.

Pinkbeardedpony
Truth's Deathless Voice
@TexasUberAlles
The cup guard seems like the only way to go if you want a guard at all. I was being charitable and giving you the benefit of the doubt that you weren't suggesting a grossly inferior alternative as being worthy of consideration. Why bring it up otherwise.

Your argument that a grip and guard would make the difference in a duel because of the danger of throwing implements is a mere pretext for the shifting goalposts fallacy. My argument for a sword without a grip or hilt is predicated on the wielder fighting a single opponent in a duel. If you didn't understand my premise, than I apologize.

One interesting thing to note is that Shining Armor and the other unicorn guards don't protect their horns in any meaningful way. Seems like a major oversight wouldn't you say? Perhaps though, unicorns that are experienced fighters have practiced maintaining their magic even if their horns are struck. Something to think about.

If you want to speculate on what weapons unicorns would use in a battle, I think the answer is obviously javelins, bows, and spears, and not swords. ;3

We at least agree that a slashing sword would be leagues better for non-unicorns.

@Pinkbeardedpony
your contention that a basket guard is equally effective

finish some blades and then sell just those pieces to unicorns
Sounds like an excellent way for a Unicorn to get killed in a swordfight because someone landed a palpable hit on their horn; we've seen more than once that smacking a horn is enough to not only fizzle a spell, but disrupt basic thaumakinesis and cause anything being levitated to be dropped like a rock. A brace of throwing daggers or shuriken would likely be standard equipment as distractions if nothing else, but a sensible swordfighter would want a primary weapon that could still be scooped up and held in the mouth if their telekinetic abilities were compromised.

A Human-type straight grip would still be more effective for a slashing or cutting blade— equines really do have incredibly powerful neck muscles, I've seen ponies knock full grown cowboys flat on their ass with a toss of the head— but for a stabbing blade, some kind of ring or paddle shaped grip would definitely be more practical.

Pinkbeardedpony
Truth's Deathless Voice
@IceKitsune
Your contention requires the sword to be a weapon that the other races utilize, which I would be disinclined to believe. Even if pegasi and Earth ponies did use swords, a basket-hilt in the style depicted in the piece would make holding the sword in the mouth very impractical, presuming it is primarily/exclusively intended to be a thrusting weapon. Setting aside the efficacy of swords for non-unicorns, swords are constructed in pieces. I would think that pony smiths would finish some blades and then sell just those pieces to unicorns as a way to reduce weight, cost, and production time.

@TexasUberAlles How droll that you specifically excluded the part of my post that mentioned wielding swords with telekinesis in your quotation. ( ≧Д≦)

Moving on, I disagree with your contention that a basket guard is equally effective at protecting a swordsman who holds his weapon in his mouth. What if your opponent manages to stab in between the strips of metal on the basket guard? For a sword held in the hand, that means your hand has been stabbed and you are likely dropping your weapon. If you are holding the sword in your mouth, an enemy managing to slip through the basket means your face is getting stabbed and you are likely dead.

In terms of visibility, I don't think the difference between a basket and cup guard is enough to warrant the reduced protection of the latter. Also note my reply to IceKitsune, and the obvious problem of gripping a basket-hilt sword in the mouth with the intention of thrusting with the weapon.

On a separate note, I don't think pegasi or Earth ponies would use swords primarily intended for thrusting anyway. Jabbing at the enemy with a rapier limits the natural advantage of those big equine neck muscles. They would be much better off using arming swords or similar variants.

This is bloody magnificent.

Still useful for protecting the face with a mouth hold grip, and offers better visibility than a full cup guard.
This image is blocked by your current filter - click here to display it anyway

Pre-G4 Art Archivist
@Pinkbeardedpony
Well, it would likely be useful for earth, pegasus, and non-pony races to have the Basket Hilt on the sword; likely it would just be a standard design making it usable by everyone.
Posted 4 years ago Report
Link Quote Reply

It makes me ruminate upon the likelihood of unicorns making basket-hilted swords if they wield them exclusively with telekinesis (as I suspect). A cross guard would still perform its intended function, but a basket guard seems completely unnecessary. The only way I can see it happening is if ponies found the rapier design in the ruins of a human(oid) civilization and constructed the weapon to be as similar to the original description/illustration as possible.

Anyway, thanks for sharing your art with us.

gives off a kind of "musketeer" vibe with that rapier.