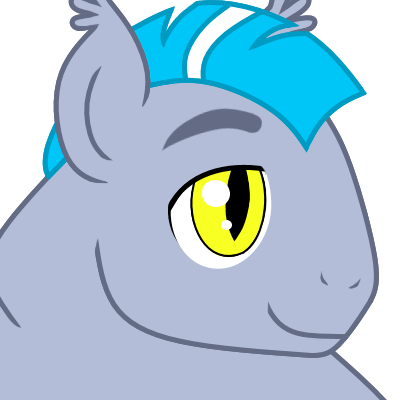 Swol Patrol
@Background Pony #1421
I’m glad to hear you like it, and thank you for the detailed feedback, I really appreciate it! I do my best to make muscle that looks huge without impeding movement. The soft thing too is also what I aim for, firm and strong but also somewhat soft

The thing about the back… yeah, I get that. I’ve been trying to work on the back, because yeah, it looks lumpier than it should. Perhaps I should do a couple more poses or angles that show the back so I can practice it more. Also, those are meant to be pecs. I tried to make them look a little squished because Rainbow is laying on the ground.

The biped-looking arms and legs are a decision I made early on when starting to draw these. When it comes to anatomy what I usually end up doing is human muscle anatomy on ponies. The goal is something like Saddle Rager (>>504626), and going a little further from there in terms of making it look more human and less like the muscles were randomly placed. I know it looks a little odd, since a biped muscle structure looks odd on what’s normally an equine… For instance, a horse’s forelegs don’t really have muscle on them, sovereignbooty used to account for this in some of their drawings (ex >>762129) but IMO it ends up making the forelegs look like twigs compared to the rest, and that looks odd to me. I don’t want to go full equine, though, because I’m not really interested in that. Some form of human-equine hybrid structure might work, but then again, might look odd again, and might take a while to perfect.

Side note, the comically-undersized wings are on purpose. They look funny to me on Saddle Rager, so I kept it. Besides, with that all that beef, she’s long past getting off the ground anyway. The wings would have to be enormous just to get her off the ground.

Honestly, I might be better off doing more anthro stuff, I think I’m more interested in human muscle anyway so anthro might be a better, less unnatural way to go.

Also, as to what Rainbow is saying to Butterscotch, I wanted to include text. However, I like the look of hand-drawn text on an art piece much better than standard typefaces, but I can’t do hand-drawn text without it being very very time-consuming (since I don’t have a tablet). I might have to suck it up eventually though and just start using typed text.

What I imagine them saying:

“Hey, Butterscotch. You look like you wanna give one of these arms a squeeze.”

Sorry for the novel of a response lol, but I don’t get feedback like this often so I felt the need to explain where I’m coming from here.

Posted 3 years ago Report
Link Quote Reply
Background Pony #D887
@DragonBoi471
Not a bad way to go. Or if that gets ruled out, then cuddling will be in order. Perhaps Butterscotch could snuggle up to Rainbow Dash's massive bicep or nuzzle her warm chest and neck.


@Background Pony #EBE0
…and a hip cast. Either way, that's a lot of gorgeous mare he's got to tend to~. And he's just the stallion for the job.

Posted 3 years ago Report
Link Quote Reply
Background Pony #D887
@Urkel
Not half bad, Urkel. Don't see many artists make muscle fetish work in show style and you seem to really be improving with your poses. The shape of her calf and thigh muscles are very eye-catching and the size looks just small enough so that it doesn't impede movement while still being quite huge. Her flank is beautifully shapely too; I'd say there's plenty to actually enjoy there to say the least and the way her tail hangs off over it adds some extra sauciness. And those arms/forelegs…Holy huuuuge. I often find oversized arms done wrong but I'd say you made Dashie work it well here. Those massive biceps, triceps, shoulders, and forearm and the way they all flow together look beautiful and sexy as all hell. A great example of raw mare power! It even seems to have a level of softness to it, almost like a cloud, which is an amazing look that seems underutilized. But I may just be imagining things, heh.

I'm not so sure about her back though. It almost looks like she's got two camel humps and the wings are comically undersized. I'm also curious if she's supposed to have pecs or boobs, can't quite tell from here. That's mainly due to the odd anatomy. So while Butterscotch is clearly a normal equine and Dash has hooves and is shaped similarly to your previous pictures of ponies on all fours, her back leg and arms/forelegs are bending like a biped. So is she supposed to be anthro, equine, semi-anthro, mutant? But all of that is probably just me being nitpicky as I don't know exactly what kind of look you were going for and only you control your art style.

But you got major points with me with this scenario. Big, muscular mares flirting with/being with smaller and weaker stallions is one of my dream scenarios (especially when the mare in question is Dashie) and one that seems hard to come by. I'm very curious to know what Rainbow Dash is saying to seduce Butterscotch. I'd love to hear what these two plan on doing and what will follow~.

This will end in death…by snu-snu!
Posted 3 years ago Report
Link Quote Reply

slevaopasno
Wow, Rainbow look really sexy. I love this pose: muscle groups looks rather seductively with it. I especially like the way the neck muscles, the biceps and triceps are shown here. Nice anatomy for such a position of the body. You really doing request? Please, don't stop with muscular ponies, I think you progressive very well.
Posted 3 years ago Report
Link Quote Reply
Background Pony #2814
Man, I'm into this type of scenario, but that's just…off.
Posted 3 years ago Report
Link Quote Reply